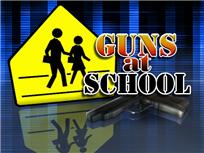 A parent in Warren County is facing charges of reckless endangerment with a deadly weapon after her child allegedly went to school with a loaded firearm on Monday, Oct. 17.

According to 31st Judicial District Attorney Chris Stanford, the child’s mother, identified as Kristen Holland, recklessly placed a loaded firearm in her child’s backpack on Sunday, Oct. 16th. Holland, 31, has been charged with reckless endangerment with a weapon.

School personnel subsequently noticed the firearm in the child’s backpack and immediately reported the situation to the Warren County Sheriff’s Department. The firearm was then secured by law enforcement officials and found to be loaded with 15 rounds of ammunition.

Further investigation revealed this was an isolated incident and did not present a threat of further harm to the public.

The District Attorney’s office issued a press release stating: “This office fully supports our constitutional right to bear arms under the second amendment, but for the safety of everyone, the District Attorney’s Office would ask the citizens of Warren and Van Buren Counties to keep your guns away from young children and store them in a safe place.”