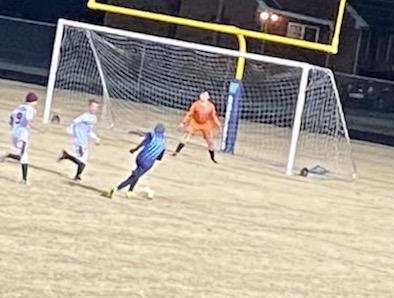 The Westwood soccer team hosted their home opener on Friday as they welcomed White County to Dyer-Bouldin Field.   The Rocket defense held the visiting Warriors without a shot on frame in the non-conference friendly.  Westwood got goals from 6 different players as they rolled to the 9 to 0 win.

Joel Barrera got the scorefest started early as he potted a goal 30 seconds into the match off an assist from Aiden Smith.  Smith added his own goal in the 6th minute as Barrera provided the helper.  Nico Sanfilippo added a goal in the 8th minute off a feed from Caleb Cargile to put Westwood up 3 nil.  Izick Sierra added a hat trick with 3 goals before the half.  Sierra got assists from CyBrody Dyer, Sanfilippo and Joan James.

The Rockets return to action on Thursday when Westwood plays host to North Franklin.   That match will get underway at 5 PM and it is the opening broadcast in the People’s Bank Hometown Spring Sports Series.  And, as always is the case with spring sports, when weather forces cancellations and postponements, Thunder Radio will keep you updated on that as well.  For more than complete prep sports coverage, remember, nobody does sports like Thunder Radio!