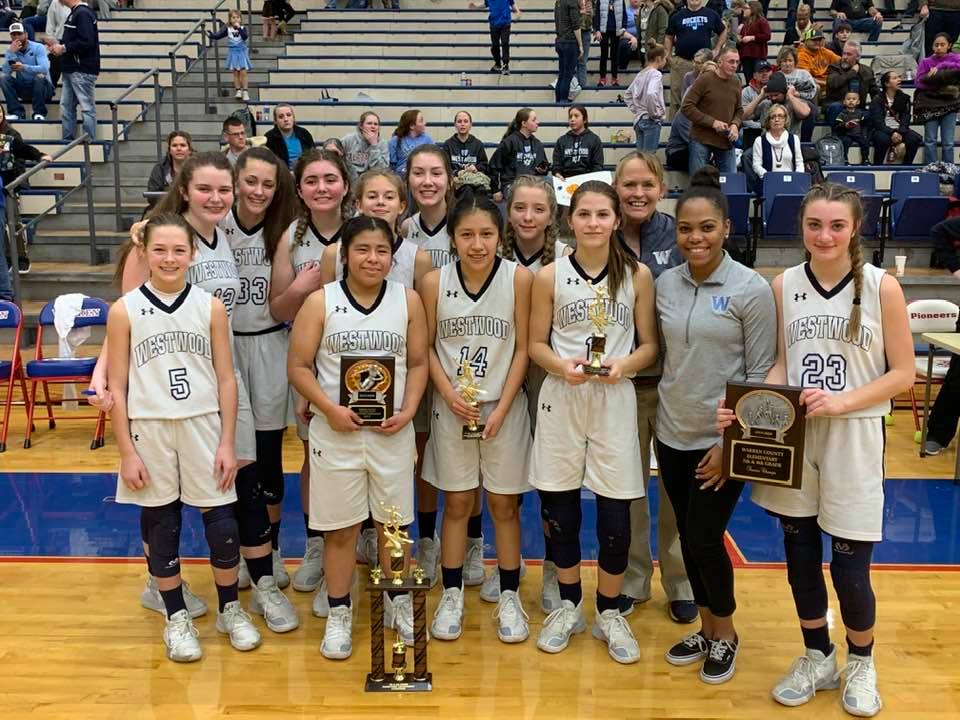 The Westwood basketball teams concluded play in the Warren County Elementary League postseason tournament on Saturday.  The Rockets ended the season with a one point loss to Morrison 23 to 22.  The Lady Rockets completed their perfect season with a 49 to 26 win over Morrison.

The Lady Rockets capped off a 17 and 0 season with a dominating win over the Lady Tigers of Morrison.  Westwood got off to a slow start trailing 9 to 4 after 1 quarter of play.  The Lady Rockets cranked up their defense holding Morrison to 1 free throw as they outscored the Lady Tigers 14 to 1.  Westwood poured in 33 points in the 2nd half to roll to the big win.  Bryleigh Gray led Westwood in scoring with 13 points.  Princess Penaloza finished with 9 points as both Gray and Penaloza got all their points in the 2nd half.  Allie Sullivan netted 8 points and Leonor Moreno scored 7 for Westwood.  After the game, Moreno was named the Tournament Most Valuable Player.  Gray and Penaloza were named to the all-tournament team.  The Lady Rockets finish the season as the preseason tournament champions, the regular season conference champions and the postseason tournament champions.

After leading 12 to 9 at the half, the Rockets saw Morrison tie the game in the 3rd quarter.  The Rockets missed 4 free throws in the 4th quarter as they dropped their 2nd straight 1 point loss.  Jayden Carter led the Rockets in scoring with 6 points.  Caiden Warren added 5 points and Cayden Trail chipped in 4.  The Rockets finished the season with a record of 13 and 4 and the regular season conference title.  Carter and Warren were named to the all-tournament team.