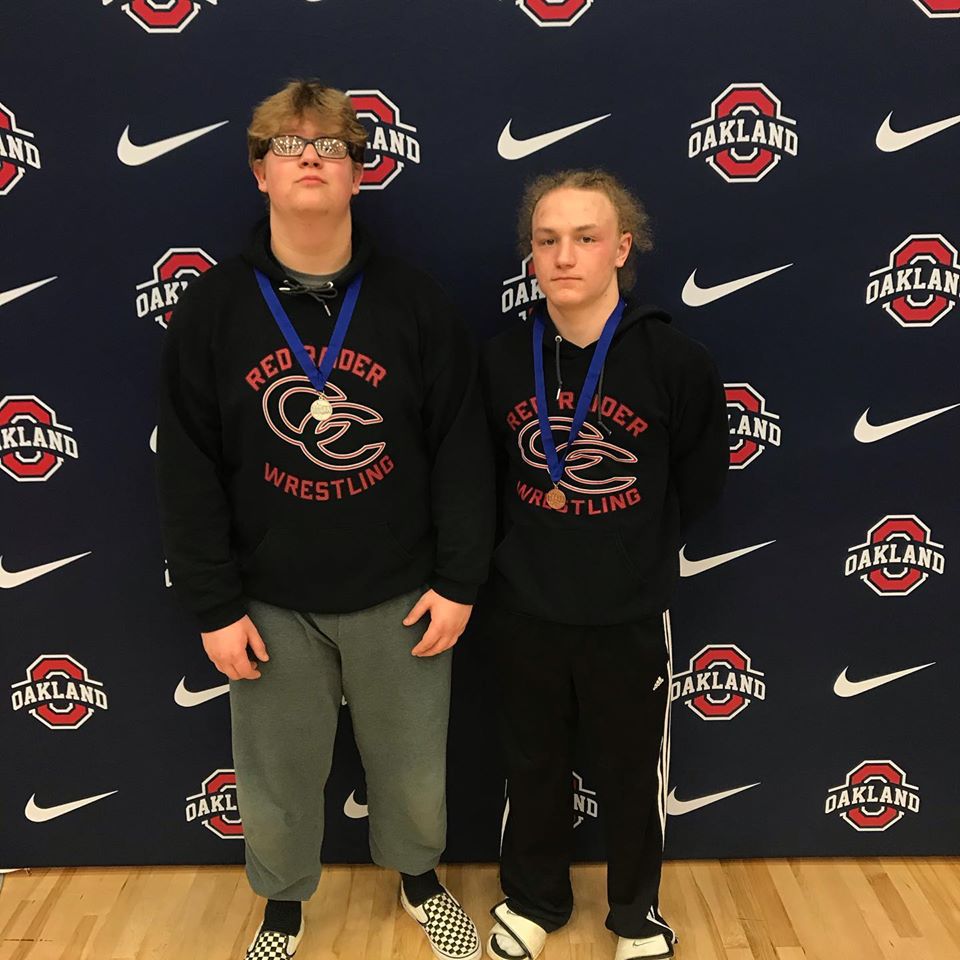 The Coffee County CHS Red Raider wrestling team traveled to Murfreesboro on Friday and Saturday to compete in the Region 5AAA Individual Wrestling Tournament.  Competing at Oakland High School for spots in next week’s TSSAA State Wrestling Tournament, the Raider grapplers managed to advance a pair of wrestlers to the state meet in Franklin.  Gavin Prater and Cardin Stump will join Lady Raider wrestlers Alanna Coker and Mary Wolfrum to compete at the Williamson County Expo Center beginning on Thursday.

Stump, wrestling in the heavyweight division, rolled off 3 straight wins to advance to the championship bout on Saturday afternoon.  After getting a bye to open the tournament, Stump scored a pair of quick pins to advance to the title match.  Stump defeated the Warren County wrestler in 57 seconds before pinning his Tullahoma opponent in 63 seconds.  In the title match, Stump fell via a pin to top seeded Graham Keating of Oakland.

Prater, wrestling at 145 pounds, had a tougher road to the medal round.  After earning a 1st round bye, Prater dropped a 9 to 2 decision to an Oakland wrestler in the 2nd round.  Prater rolled off a pair of pinfall wins before eliminating a Tullahoma wrestler by a 13 to 0 major decision to reach the medal round and assure himself a state berth.  Gavin dropped a heartbreaking 3 to 2 decision in the 3rd place match.

The Red Raiders finished in 10th place in the team standings out of 17 teams competing in the region meet.  Coffee County’s Devin Judge(at 160 pounds) and Chris Speegle(220) each finished in 5th place barely missing the cut for the state meet.  Judge finished the region meet with a record of 2 and 2 as he grabbed a pinfall win and a major decision win.  Speegle finished with a record of 3 and 2 as he grabbed 2 pinfall wins and a decision win.  Hunter Massey(126) and Caleb Boothe(132) each finished with records of 2 and 2.  Gabe Westbrook(120), Hunter Waring(152), Zach Speegle(170) and Russell Ralph(182) each finished the meet with records of 1 and 2.

The state tournament will begin on Thursday at the Williamson County Agricultural Exposition Park in Franklin.  The boys weigh-in will take place at 1 PM on Thursday with wrestling getting underway at 3 PM for the first 2 rounds. Wrestling continues on Friday at 10 AM with the championships on Saturday.  Lady Raider wrestlers Mary Wolfrum and Alanna Coker will weigh-in at 8:30 on Friday and their first round matches will begin at 10 AM on Friday morning.  The girls’ championship will also be held on Saturday beginning at 10 AM.  Tickets for the event are $10 daily with a parking charge of $5 per car.