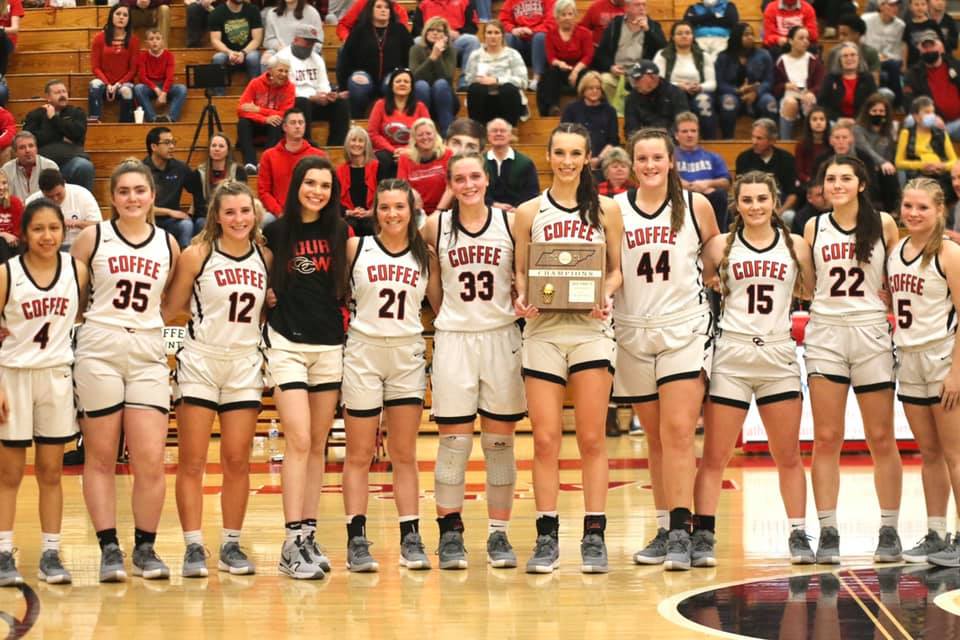 Coffee County’s defense pitched a shutout in the first quarter and nearly kept Tullahoma off the scoreboard in the entire first half as the Lady Raiders cruised to a 39-26 District 8-AAA Championship Friday night at Joe Frank Patch Memorial Gymnasium.

Defense was the name of the game for the Lady Raiders, who improve to 27-1 on the season with the win. Coffee County led 10-0 after one quarter in a game that was slowed by Tullahoma’s pace of play.

The Lady Raiders methodically worked the ball around to select their shots in the second quarter and pushed in front 18-0. CHS nearly had a first half shutout, but a lazy pass was stolen away by Tullahoma’s Kailyn Ferrell, who finished with a layup with 30 seconds to play in the first half to make the score 18-2 at the break.

Tullahoma mixed up its plan in the second half to try and generate offense but the Lady Raiders never allowed Tullahoma to get any closer than 13 points.

Bella Vinson led the way for CHS, finishing with 13 points, and sophomore post Chloe Gannon had a big second half, scoring 8 of her 10 in the final two periods. Elli Chumley added 9 for Coffee County. Sophomore guard Alivia Reel knocked down a pair of big 3 pointers in the first half to finish with 6, and junior Emma Fulks added a point. Ferrell scored 11, she was the first Lady Cat to score in double figures in the three games Tullahoma has played against Coffee County this season.

Both teams advance to the Region 4-AAA quarterfinals and will be at home Monday.

Advertisement. Scroll to continue reading.
This game was broadcast LIVE on Thunder Radio. Hear the replay by clicking here.

The Lady Raiders will host Rockvale – the no. 4 seed from District 7-AAA. Meanwhile, Tullahoma will host Riverdale, who was upset by Oakland to fall to third place. Game times and ticket information for Monday will be announced later on Saturday.

Road to the glass house

The Lady Raiders have their eyes firmly on big prizes – mainly a state championship. But getting there will not be easy. Here is a breakdown of what needs to be done:

*Win Monday (March 1) in the region quarterfinals vs. Rockvale. This is an elimination game. The winner will move to the semi-finals, the loser’s season is over.

*Win Tuesday, March 2, in the region semi-finals vs. TBA. This game will be at home and is an elimination game.

*Win in the region championship vs. TBA. If CHS reaches this game and plays Blackman, the game will be on the road. If any other team in the region tournament gets to the title game, the Lady Raiders will host. This is not an elimination game. The winner of this game will host the state sectional game. The loser will travel to the Chattanooga or upper Cumberland area.

*Win the state sectional game. This is an elimination game and will likely feature Bradley Central or Stone Memorial – two top 5 teams in the state. Winner goes to the state tournament. Loser’s season is over.