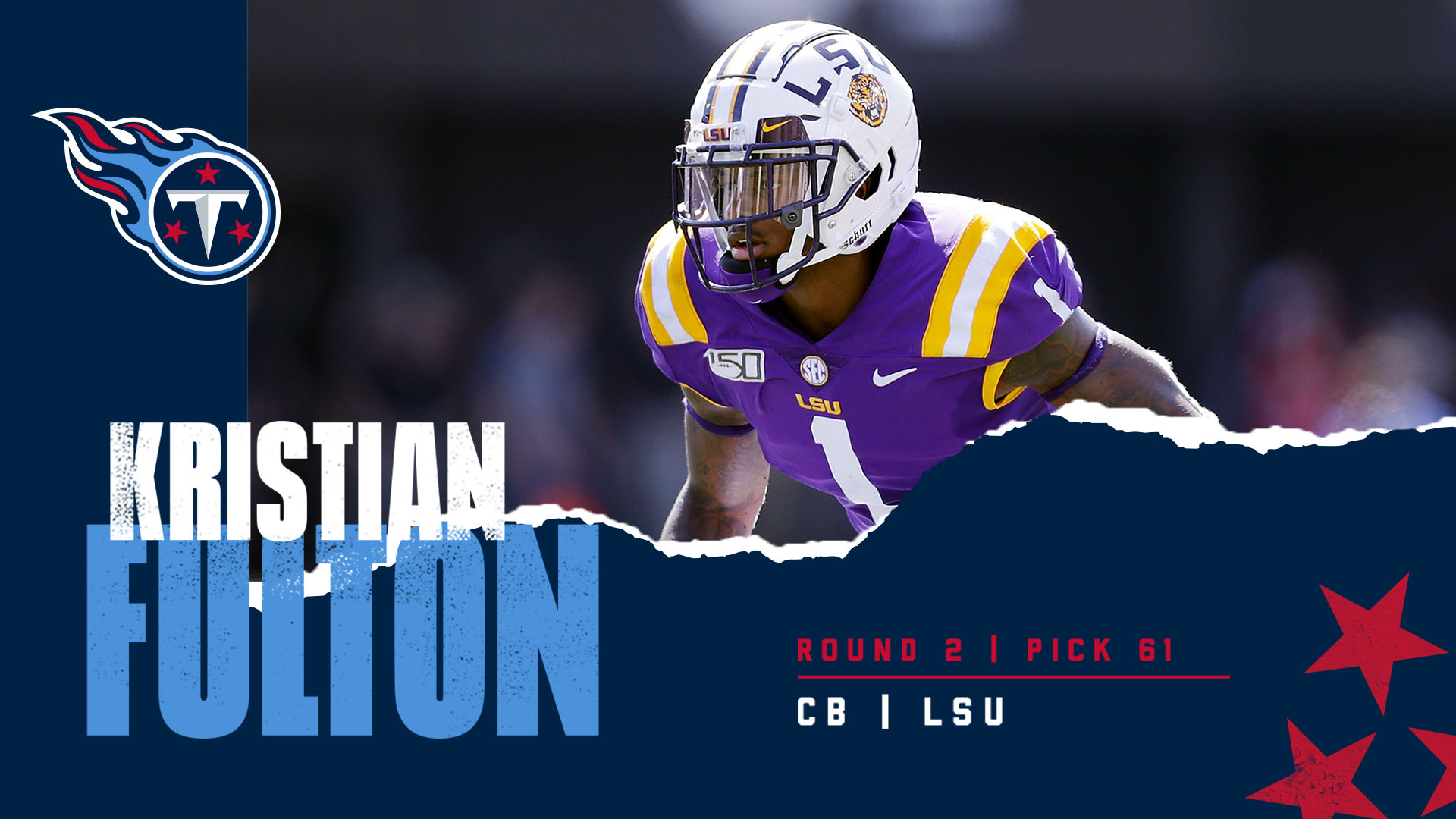 “Let’s Geaux!!!,” Fulton said on Twitter after being picked. “Excited to join the Squad @Titans! More motivated than ever and ready to work! #TitanUp.”

On a conference call Friday night, Fulton said he met with the Titans at the NFL Combine and remained in contact with the team leading up to the draft. Fulton said the Vikings, Cowboys, Raiders, Saints and the Falcons all expressed a lot of interest in him in recent months as well.

“They feel like I can bring versatility to their secondary, and they like my game,” Fulton said of the Titans. “I wanted to go to a coaching staff and an organization that believed in me and my talents.

“They have a great defense. I know coach Mike (Vrabel) is a defensive guy, and that is the kind of coach you want to play for – a guy who is going to study your game and put you in the best position. You don’t get to the AFC Championship Game without playing great defense. I want them to use me … to help elevate that defense to be elite.”

The Titans feel like they got an elite player in Fulton.

Fulton was a two-year starter at cornerback for the Tigers in 2018 and 2019, and he graded out as one of the nation’s top cornerbacks in 2019. He was the 42nd ranked player on NFL Network analyst Daniel Jeremiah’s top 50 draft board heading into the draft. ESPN’s Jeff Legwold ranked Fulton No.41 on his Top 100 list, while ESPN’s Todd McShay had Fulton ranked 38th overall. Draft analyst Mike Detillier ranked Fulton the 25th best prospect in the draft.

GM Jon Robinson said the Titans were tempted to move up to get him, but said the team waited it out instead.

Vrabel said he was impressed with Fulton during pre-draft meetings, first in person and later on Facetime.

“I think you have to be able to run at that position,” Vrabel said. “I don’t know where everybody is going to fit, but I certainly like (Fulton) and we’ll start working with him as soon as we possibly can.”

At LSU, Fulton played in 28 games, with 25 starts. He finished his career with 65 tackles, 25 passes defended and two interceptions.

In LSU’s win over Clemson in CFP National Championship Game, Fulton posted a career-high six tackles, including one for a six-yard loss.

Fulton will join returning cornerbacks Malcolm Butler and Adoree’ Jackson, along with Tye Smith, who re-signed with the team earlier this week. The Titans also have cornerbacks Kenneth Durden, Chris Milton and Kareem Orr under contract for 2020. The team has not re-signed cornerback Logan Ryan, who remains on the market, while LeShaun Sims joined the Bengals this offseason after playing previously with the Titans.

Fulton said the Titans asked him how he felt about playing inside in the defense. The team thinks he’s capable because of his toughness, tackling ability and instincts.

Robinson and Vrabel said the team plans to let him compete, and they’re hopeful he can contribute early.

“He’ll get in here and compete with the guys we have on the roster and his role will be defined by himself and how quickly he can get acclimated to our football program,” Robinson said. “He has obviously played at a high level on a really, really good (team) in college football. There was a lot asked of him, a lot put on his plate to learn, and we think that transition hopefully will be good for him.”

Fulton acknowledged on Friday night the wait to get drafted was a long one, but said it was worth it.

“It was extremely tough, the wait,” Fulton said. “But I had keep reminding myself that the right team, the perfect fit, will come to me. I didn’t want to go to a team that wasn’t 100 percent confident in me.

“It was definitely worth the wait when I got that call. I am excited to be a Tennessee Titan.”