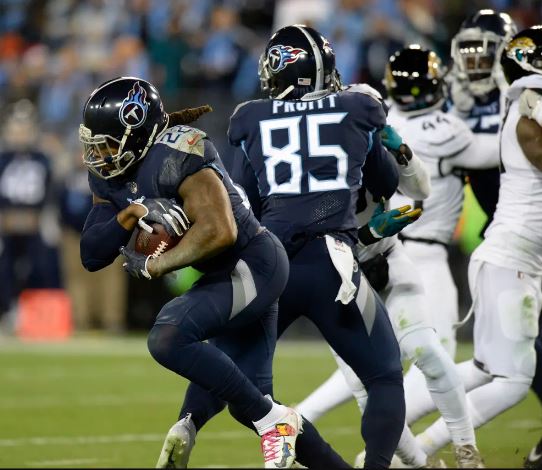 The Titans are keeping their 1-2 offensive punch together.

One day after reaching a long-term deal with quarterback Ryan Tannehill, the Titans found a way to keep running back Derrick Henry in the fold for at least one more season as well.he Titans on Monday placed the franchise tag on Henry, who led the NFL in rushing in 2019.

Tennessee used a non-exclusive franchise tag on Henry, which means he can receive offers from other teams with the Titans having the opportunity to match. If Tennessee declines, the other team must give the Titans two first-round draft pick — making it unlikely another team will make Henry an offer this offseason.

It was a critical and necessary development for a team looking to build on last season’s trip to the AFC Championship Game.

Earlier this offseason, Henry expressed his desire to remain in Tennessee.

The Titans are allowed to negotiate a long-term deal to replace the franchise tag until July 15th, after which time Henry would have to play the 2020 season under the one-year franchise tag.

Henry, selected to his first Pro Bowl in 2019, was named the FedEx Ground Player of the Year and second-team All-Pro by the Associated Press after leading the NFL with a career-best 1,540 rushing yards on 303 carries.

Henry ranked third in NFL with 18 total touchdowns, and he ranked second in the AFC and fourth in the NFL with 1,746 yards from scrimmage.

Henry was a real workhorse in the postseason, setting a franchise playoff record with 182 rushing yards at New England (1/4/20) before resetting it with 195 rushing yards at Baltimore (1/11/20). Henry gained 69 yards on 19 carries in the AFC title game loss at Kansas City.

Henry was the only running back in the NFL to average more than 100 rushing yards per game (102.7) this season.

In his first four NFL seasons, the former Heisman Trophy winner at the University of Alabama Henry has racked up 3,833 yards and 38 touchdowns on 804 carries.

In an interview at the Pro Bowl in January, Henry told Titans Online he’s hungry to win a Super Bowl.

“In a perfect world, I wish everybody could come back, and we could make another run at it and end on the right note,” Henry said. “I am definitely hungry, not only to get better myself, but to win a Super Bowl.

“My goal every year is I always want to be better than the year before. So that’s what I’ll be striving for heading into next season. I want to do everything I can do to help the team win a Super Bowl.”