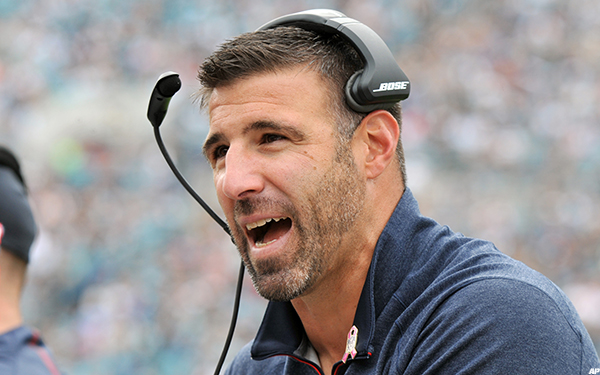 The Titans quest to go from good to great got off to a nice start here on Sunday.

Underdogs in a hostile environment, the Titans took the fight to the Browns in a dominating performance – a 43-13 win.

It pleased Titans coach Mike Vrabel – at least for a day.

Running back Derrick Henry ran 19 times for 84 yards, and he scored twice — once on a run, another on a catch.

The two combined for a monstrous play in the third quarter, as Mariota connected with Henry for a 75-yard touchdown pass after the Browns had cut the lead and reenergized the crowd. The play gave the Titans a 22-13 lead with 1:57 remaining in the third quarter.

“I knew going in that we had an opportunity with that play, and it just hit,” Mariota said. “I knew if I could get the ball to Derrick that it was going to have a chance. Guys did a great job of blocking downfield and you get that guy in space and he’s tough to tackle.”

It was also a big day for tight end Delanie Walker, who caught a pair of touchdowns a year after having his 2018 season cut short with a season-ending injury in Week 1 at Miami.

An 11-yard touchdown pass from Mariota to tight end Delanie Walker made it 29-13, and then Mariota found Walker again for a seven-yard touchdown toss to make it 36-13.

And the rout was on.

The Titans kept their composure through it all on a day when the Browns had 18 penalties for 182 yards, including several roughness and unsportsmanlike penalties. Walker got punched in the face, and safety Kenny Vaccaro got kicked in the side of the helmet, leading to a Browns ejection.

“We are not the team that retaliates,” Walker said. “We retaliate by making plays and finishing blocks and I guess they didn’t like that.”

The Titans also didn’t mind the fact the Browns got all the buzz leading up to the game, and season.

“They were who we thought they were,” Walker said of the Browns. “If you want to crown them, crown them. But they still have to play football.

“Hey, keep us under the radar. That’s where we like to be. Thank you.”

The Titans racked up five sacks and three interceptions in the game.

Cornerback Malcolm Butler added to the flurry of scoring with a pick-6 late in the fourth quarter, and FirstEnergy Stadium emptied. It followed interceptions by safety Kevin Byard and cornerback Logan Ryan.

“You can look good on paper,” Butler said of the Browns, “but it has to match up when you get on that grass. We stuck together and won as a team today.”

Veteran outside linebacker Cameron Wake was beastly in his Titans debut, racking up 2 ½ of sacks, including one that resulted in a safety. The sacks were No. 99 and 100 for Wake, who joined the Titans this offseason after playing his first 10 seasons with the Dolphins. He later added a half-sack.

“It was a crazy offseason, but I think I landed in the right place,” Wake said. “This organization has welcomed me with open arms and obviously I want to do my part along with the guys up front. And I think we did that today as a group. It was a lot of fun.”

Kicker Cairo Santos was pretty good in his Titans debut as well, making kicks of 37 and 53 yards.

The Browns took a 6-0 lead early on a four-yard touchdown run by running back Dontrell Hilliard, which capped an eight-play, 73-yard drive. But the Titans stiffened up on defense, shutting out the Browns the rest of the first half.

Titans defensive coordinator Dean Pees, who turned 70 during the week, kept his players on point the rest of the way.

“Dean told us to ignore the noise and play with poise,” Ryan said. “We just kept playing.”

The Titans got their first points on a 37-yard field goal from Santos.

The defense got to Browns quarterback Baker Mayfield the next series when Wake recorded his first sack of the contest.

In the second quarter, the Titans put together a beautiful drive that produced a touchdown, which gave them the lead. Henry ended the 11-play, 87-yard drive with a one-yard run, which put the Titans ahead 10-6. Mariota connected with Walker on the drive, and the Titans also took advantage of some penalties on the Browns to move ahead 10-6.

Then came another sack from Wake, who tackled Mayfield in the end zone to give the Titans a 12-6 lead. Wake’s sack was set up by a 70-yard punt by Brett Kern that was downed at the three-yard line.

Santos hit a 53-yarder to cap Tennessee’s opening drive of the second half, making it 15-6.

After the Browns cut the lead to 15-13 on a Mayfield touchdown pass to tight end David Njoku, it was all Titans.

Mariota’s 75-yard touchdown pass to Henry was the biggest play of the game, and it was set up by a crushing block from guard Rodger Saffold, springing Henry loose and into open space.

After an interception by safety Kevin Byard set up the touchdown pass to Walker, and the Titans were on their way. Cornerback Logan Ryan later added his first interception as a Titan before Butler’s pick-6 late.

The Titans face the Indianapolis Colts Sunday at Nissan Stadium.  Thunder Radio will bring you the broadcast of that game beginning at noon.