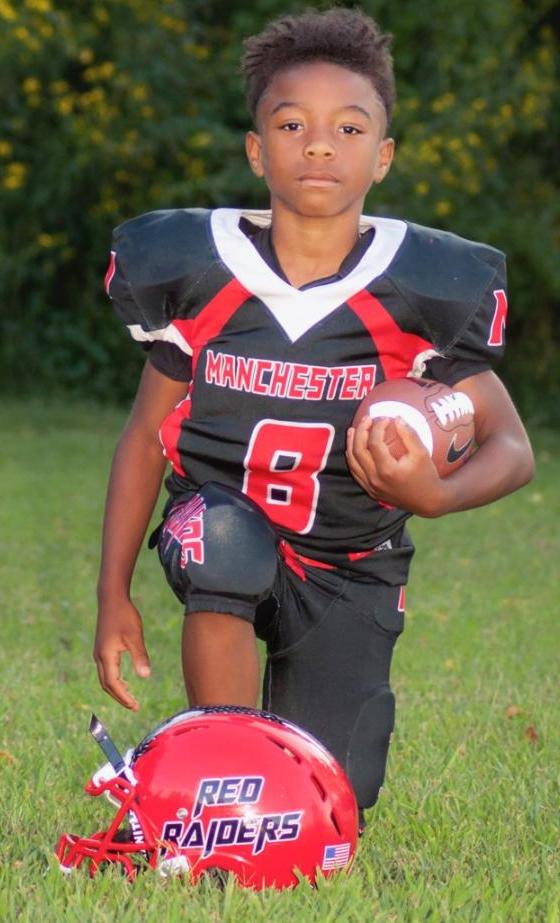 MYFL continued their season on Saturday with all six teams in action.

The teams competing in TCYFL (TRI COUNTY YOUTH FOOTBALL LEAGUE)
Made a long road trip on Saturday to Celina, TN to take on the Clay County Bulldogs.

Junior Division (8-9 year olds)
Story by Ashley Delaney Whitman.
The Red Raiders assured themselves a place in the TCYFL Playoffs after a near flawless victory against Clay County on Saturday.  The Red Raider offense piled up yardage the entire game.  AJ Whitman lead all scorers with 3 touchdowns and an extra point. Huck Damon also had two touchdowns and an extra point.
Ty Stevens and August Lynch contributed with an extra point each.
The Raiders potent defense was also dominant as they held the Bulldogs scoreless and did not allow a first down the entire game. Lynch, Whitman, Tanner Daugherty, Audie Nicoll, Kelden Jolly, Myles McIntosh and Jordan Henley’s names were called through the stadium speakers repeatedly as the Raiders shut down the Bulldogs and any hope of them making it to the end zone. The Raiders move to
3-1 with 2 games left.  Final Score:  Manchester 36 Clay County 0

Senior Division (10-12 year olds)
The Raiders were held scoreless by a much bigger and faster team and were no match for the Bulldogs offense. Head Coach Gary Melton quoted  “The kids played hard and never quit. They had a really good running back that we hit but he kept getting away and we couldn’t catch him.”  The Raiders fall to 1-3.  Final Score: Manchester 0 Clay Co 30

The SMTYFA teams of MYFL played host to the Giles County Red Hawks at Carden-Jarrell field.

Division 1 (5-6-7 year olds)
The game was a forfeit to begin with as Giles County arrived with only 8 players and the referees would not officiate the game. The decision was made to continue without officials. (Special thanks to Jon Helms for stepping in to be
be a replacement referee).
Avery Hodges started the game with a touchdown and Kayleb Morris added the extra point. Morris threw to Karson Wimley for a 65 yard touchdown and Trenton Gadeken punched in the extra point. Christopher Meeks recovered a fumble and Griffin Woods ran for a 35 yard score but no attempt was made at the extra point as the Red Hawks, having taken too much punishment from the Red Raiders
high powered offense and dominate defense stopped the game giving the Raiders the win.The Raiders now have a 6-0 record as they remain unbeaten and have still not allowed any of their opponents to score.  Final Score:  Manchester 20 Giles Co 0

Division 2 (8-9 year olds)
The Raiders offense was outstanding as Levi Scott was sprung by huge lead blocks from Treyvion Mathis and outstanding line play. Scott ran for 5 touchdowns and an extra point conversion. He also had 2 interceptions. Mathis rushed for 100 yards, scored an extra point, had several sacks, forced 3 fumbles and recovered 1 one of those.  Kaden Strohm was instrumental as he dominated the ”A” gaps the entire game preventing the Red Hawks from gaining yardage up the middle. Xavier Foy, Easton Hinson and Riley McBroom all had a great defensive game. The Raiders, now 5-1 cruised to the win.  Final score: Manchester 32 Giles Co 6

Division 3 (10-12 year olds)
The Raiders once again showed the opposition no mercy in a game which ended before the kickoff to start the second half when the head official stopped the contest due to lightning. Caiden Martin started the game with a touchdown but the extra point attempt failed.  Kamerom Stafford caused a fumble followed by the “scoop and score”. Martin added the extra point.  Martin scored again with Landen Abellana adding the extra point. Martin scored yet again with Gabriel Hambly running in for the extra point. Matthew White contributed with a touchdown run and Kaysen Lowery threw for the 2 point pass play to a wide open Tyler Martin. To end the first half and ultimately the game. The Raiders maintain their stranglehold on the Division with another big win and now sit in 1st place at 6-0 with only 21 points having been allowed all season. Final Score: Manchester 35 Giles County 0

Next Saturday, October 12th all six teams will be back in action as the TCYFL teams of MYFL play host to the Cannon County Lions at 10:00 am at Carden-Jarrell field.  Take a break from Exit 111 and come check out some great football action.

The SMTYFA teams will be on the road in Lewisburg, TN against the Marshall Co Elite. Game time is also 10:00 am for the first game.