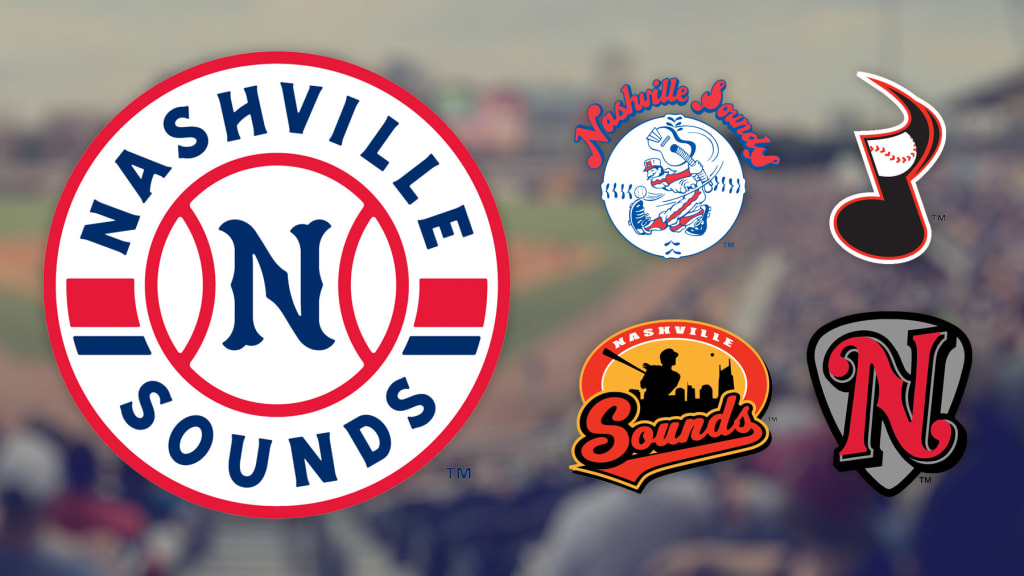 Team’s identity has evolved, name has stuck since 1978 inception

By Tyler Maun of MiLB.com

Nashville is the Music City, and what is the Music City without its sound(s)?
The Nashville Sounds have been a fixture in Tennessee’s capital city for over four decades, a legacy that dates to the late 1970s in a community hungry for baseball.

“The Nashville Vols had played in Nashville for like a hundred years from the Civil War era up through 1963, and then Nashville didn’t have professional baseball for about 15 years,” Sounds vice president of operations Doug Scopel said recently. “Larry Schmittou was involved with Vanderbilt as their baseball coach, and he kind of put the group together to get the Sounds franchise restarted with the first season being 1978.” Awarded an expansion club in the Southern League for 1978, Nashville needed an identity.
“They did one of those Name the Team contests,” Scopel said. “[The Sounds’ first general manager Farrell Owens] told me over the years and I can’t remember the number of suggestions they got, but being a city that hadn’t had a team in over a decade, the interest was immense. Out of that group, they ended up picking the Nashville Sounds.”
The name was concise. It didn’t limit Nashville to one genre or one element of its music heritage. It covered it all — with star power.
“At the time when the Sounds started with Larry’s group, they had several entertainers, most of which were country musicians, who were minor owners of the team, people like Conway Twitty and Richard Sterban from The Oak Ridge Boys and some of the Gatlins were in there and Jerry Reed,” Scopel said. “I don’t even know the full list off the top of my head, but those two elements going together ended up with Nashville Sounds. Obviously, it’s worked. We’ve been doing it for 40-something years.”
The club’s initial look was pure ’70s with bubbly lettering that incorporated musical notes and an instant hit of a logo featuring an old-time ballplayer swinging a guitar at a pitch.

“This is one of those myths that might be urban legend and may not be the truth, but I’ve heard it enough that this is what I tell people,” Scopel explained. “Larry Schmittou, the founder of the Sounds, there was a conversation maybe in somebody’s office, maybe it was over lunch and people were just talking about, ‘What could our logo be?’ Apparently it was kind of a rough sketch on a napkin that was created and given to somebody who had some sort of design sense at the time, and that’s how that came out, that famous guy using the guitar to hit the baseball.”
The red, white and blue color scheme, logo and wordmarks were largely unchanged for the franchise’s first two decades. It put down roots in Greer Stadium and moved up to Triple-A in 1984, with the music note “N” cap becoming iconic in a way that still resonates.
“We still use that logo to this day at Sounds games,” Scopel said. “We have our very popular Throwback Thursday promotion where the team actually wears those original 1978 uniforms. That logo, that theme, that image of that guy, it’s so historic — there’s probably a better word for it than ‘historic’ — people in Nashville love it to this day, so we make sure it’s part of our brand that we continue to use.”
In the late 1990s, change came. After the Sounds were sold to a group of Chicago businessmen, the team underwent its first redesign.
“Throughout sports a lot of times, [new owners] want to come in and make their own mark on the team,” Scopel said. “I think that was the genesis of that change. Not only did they go away from the original marks, but they got rid of the color scheme. They went to black and red primarily.”

In addition to eschewing its patriotic colors, the team retired its character-centric logo for a new music note mark prior to the 1998 season — when it moved from the disbanded American Association into the Pacific Coast League.
Seven years later, the Sounds were at another turning point, outgrowing a ballpark just past its 25th birthday. Once more, the franchise’s visual identity changed with its circumstances. “Greer Stadium in its heyday was well loved by everybody, but over time, ballparks get outdated,” Scopel said. “Once we got to pretty much 2000, there was chatter in town and among our ownership group that they were trying to get a new ballpark built for Nashville.
“That logo with the skyline was actually part of a marketing campaign that we had done as an organization to try to garner (support) — ‘Sounds Good’ was the actual branding — to try to generate interest and get some steam built up to get a new downtown ballpark. The look of that skyline is how I guess either our ownership or the marketing team they hired envisioned people seeing the skyline of Nashville from the potential new ballpark location.”

The skyline logo became Nashville’s primary in the mid-2000s as a push for a new home gradually gained momentum. It took over a decade, but by 2015, the Sounds were readying to move into what is now known as First Horizon Park. Another new chapter in team history came alongside a new look — this one not without challenges. Following the 2014 campaign, the Sounds worked with renowned design firm Brandiose, requesting options for a possible team name change before deciding to stick with what had worked for nearly four decades.
“I believe the feedback was that none of the other ones that were presented would’ve had quite the impact to us,” Scopel noted. “Plus the ‘Sounds’ is obviously the sounds of Nashville, sounds of music but also the sounds of the ballpark. There are so many ways you can do it and use it. It’s one of those classic names that I don’t know if we’re ever going to change it.”
Ahead of the move, Nashville unveiled its latest visual package centered around a guitar pick-backed “N” and an F-hole-inspired wordmark supplemented by a new color palette that drew the most attention of all: “Broadway Burnt Orange, Sunburst Tan, Neon Orange and Cash Black” according to a 2014 story on the release.

“The original unveiling of that logo scheme, we went with a brand new color [set] so that it was orange and there was gold,” Scopel said. “It was definitely a departure from the red and black, going to more neon-type of colors to try to tie into Nashville. There were good storylines behind it. “[Brandiose], they do their research and put out great products for everybody. That one, when we came out with the color schemes on it, we just got a lot of pushback from the public on that. A lot of folks were, ‘Well, the University of Tennessee is orange. We love the red and black of the Sounds. That’s been your colors for a long time. Why are we changing that?’” The new colors were scrapped. When the Sounds hit their new home in 2015, red and black were back.

“Whenever you make a logo change, there’s always going to be people that love it. There’s going to be people that hate it. The majority of people won’t say a whole lot,” Scopel said. “That one, gosh. That one really sparked a lot of discussion and whatnot, and we ultimately made the decision to keep the logos but go back to our red and black that the Sounds had been for the previous 10, 15 years or whatever it was before that but still incorporate the notes, the music industry with the picks and some of the neon signage on Broadway and the ‘Music City’ across the chest of one of the jerseys to try to really come back and embrace Nashville. I think that’s what was missing from the previous (1998-2014 look). Yeah, you had the music note. Yeah, you had the skyline, but you can’t see that skyline from our new ballpark. There wasn’t really as tight a connection to Nashville. That was kind of the thought on why we made that change back in 2015.”
After three seasons in the ballpark-opening look, the Sounds “remastered” their visual brand into a modern classic, heading into 2018 with a fresh vision from Nashville-based RARE Design.
“What we left out of [the 2015 redesign] — it wasn’t a bad rebrand — but it embraced Nashville more for the Broadway and more the Music City and the ‘It City’ era,” Scopel said. “There’s nothing wrong with that. The redesign [for 2018], we brought it back, classic, made it more about the history of the Sounds going back to the red, white and blue, keeping things a lot cleaner.”

Tributes to the state, city and team history are threaded throughout the club’s current logos from the three stars of the Tennessee flag to special sloped crossbars across the “A” and “H” in the team’s custom typeface “to pay respect to the unique shape of the right-field hill at Sulphur Dell,” the city’s first home to professional baseball.
“The’N’ that’s on our hats still has the F-hole of a guitar,” said Scopel. “We still have some of the music industry in there. it was just kind of a way to focus. not just on Broadway. but also the full communities that make it truly Music City and the history that got us there. It was a goal to do all of that, and the feedback we’ve gotten has been really, really good on that. We hope this one has a lot of staying power and sticks with us for a while.”
Like their city, the Sounds have evolved over the decades. Now one of the Minors’ staple franchises in one of the sport’s top facilities and one of its hottest destinations, the Sounds are in the midst of a renaissance and a love affair with their dedicated base.
“If our fans weren’t passionate and really cared about what we’re doing, we wouldn’t have heard the overwhelming feedback of what they want,” Scopel said. “That’s what you have to think through. At the end of the day, it’s all about making sure that the people who are a part of the Sounds experience truly enjoy it. Do they approve of a logo? That’s one small part of it, but that is a big factor. We want people to be passionate about us.
“We want everybody to feel like they are a part of the Sounds, and that passion cannot be understated.”