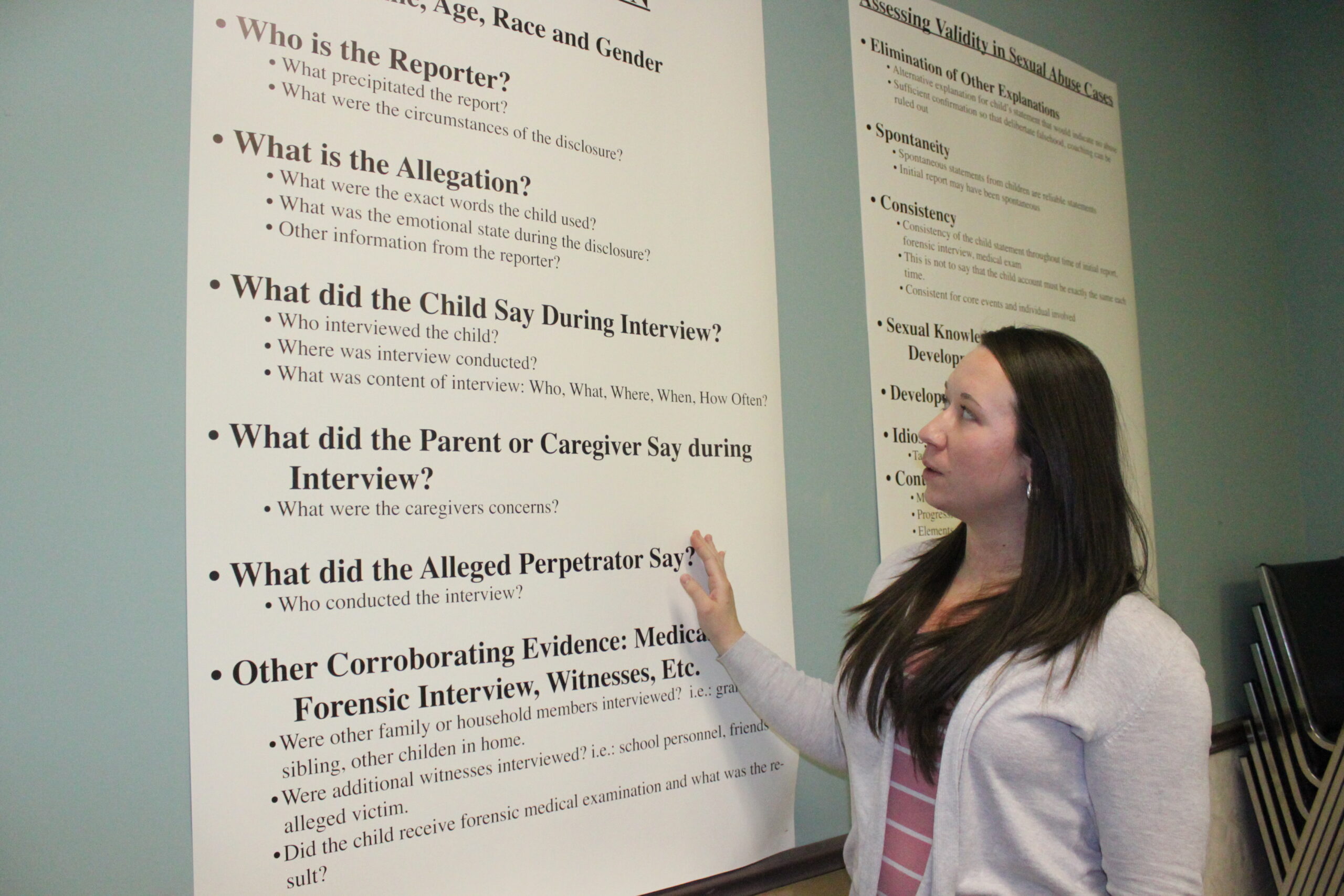 (April is Child Abuse Awareness Month. The following is the third in a seven-part series written by Elena Cawley for Thunder Radio. )

When child abuse is reported, the Coffee County Children’s Advocacy Center conducts a forensic interview and law enforcement gathers evidence. The next step in the process is the Child Protective Investigative Team (CPIT) reviewing the case.

Rachel Fuller, forensic interviewer for the advocacy center, is one of the CPIT members.

“My main responsibility at the advocacy center is interviewing children who have been involved in some type of allegation of sexual or physical abuse,” Fuller said. “I bring them into the interview room, and we talk. We have a discussion, and hopefully they feel comfortable enough to disclose what happened to them.”

This conversation at the advocacy center is extremely important.

“What is said here is what is admissible in court,” Fuller said. “This is the only conversation that’s admissible, so it’s recorded. (During the conversation) DCS (Department of Children’s Services), law enforcement, and sometimes others, are present and are listening and watching, in case they have any questions. And they’re making sure I’m covering all the things that are important.”

“And then, when the case gets to court, and the (perpetrator) is potentially prosecuted, I can be brought in to offer testimony involving what the child said during the forensic interview,” Fuller said.

Challenges during the interview

The interview is ridden with obstacles.

“The biggest challenge is the age,” Fuller said. “Are they developmentally ready to be interviewed? Some of them are. But some of the victims are very young – some of them are 3 years old. That age can be very challenging to bring into the interview and answer the kind of questions that need to be answered. Also, the children are not always ready and willing to talk about the kinds of things they are being made to talk about. There’s overcoming a level of shame, of embarrassment and whatever they are dealing with.”

Fuller must build rapport and make sure children feel comfortable.

“They need to know they are safe,” she said. “They are not going to get in trouble with me for anything they say. They need to know I’m not here to judge them – I’m here to listen to them.”

Children also have to overcome fear.

“Some caregivers are not supportive,” Fuller said. “The child comes in and maybe they feel if they talk, they might get in trouble. There are numerous obstacles to getting this interview done.”

“But the interview can go for hours, depending on how much the child has to tell me,” Fuller said. “It’s all recorded, from start to finish.”

Fuller takes the information from the interview to CPIT.

“Our CPIT meetings are once a month,” Fuller said. “My role is to discuss what was said in the forensic interview.”

The Coffee County District Attorney’s Office, DCS and law enforcement are part of the team, as well.

“There’s an assistant district attorney, law enforcement officers involved in the cases that are on our CPIT agenda, and the DCS workers,” Fuller said. “There’s someone from the juvenile court system, someone from Centerstone, and someone from Our Kids. Our Kids provides medical services to children who have been physically and/or sexually abused.”

The purpose of CPIT meetings is case review.

After reviewing the cases, CPIT members decide which cases would go to court.

“Next step is going through the court system potentially,” Fuller said. “Not all cases require that, but that will be the next step if needed.”

CPIT members must work together to provide healing and seek justice for children.

“I do want to emphasize how important it is that all of our CPIT members work together,” she said. “We serve these children and these families when we work together. I wish and hope that we can all remember that, even when we don’t all agree about every little thing.”

‘They finally got this off their chest’

Fuller has been with the advocacy center since 2017. Listening to children is the hardest and the most rewarding aspect of her job.

“The hardest thing is having to be the one who listens to children talk about their abuse,” Fuller said. “It takes a toll on you, emotionally and mentally. It’s extremely important to prioritize selfcare and your mental health because listening to children talk about those horrendous things can be a lot. Going to court and testifying is very challenging as well because it’s the defense attorney’s job to try to make people think you don’t know what you’re doing.”

Fuller finds satisfaction in showing children she believes them and wants to listen to them.

“The rewarding part is also listening to the children,” Fuller said. “Some of them have a physical reaction after they have told me, their shoulders (relax) and they give a big sigh because they finally got this off their chest. Someone finally is listening to them and wants to hear everything they have to say without judging them.”

‘There is such a stigma attached to abuse, sex abuse, people don’t want to think about it’

Stigma presents a problem, as well.

“There is such a stigma attached to abuse, sex abuse, people don’t want to think about it,” Fuller said.

“They don’t want to think it’s as prevalent as it is in our small community. It’s an ugly thought, so people would rather not think about it…ignorance is bliss.”

Pictured at the top: Rachel Fuller, forensic interviewer for the advocacy center, is one of the CPIT members. Fuller shows the questions guiding the discussion at CPIT meetings.

Want to learn more and/or get involved?