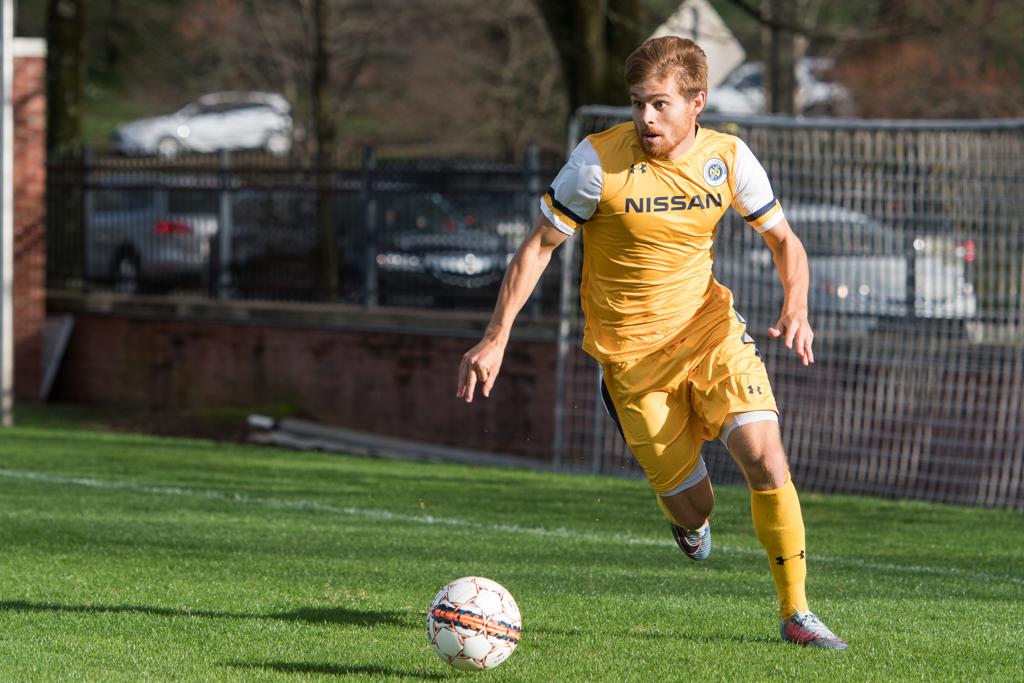 A second half blitz from Nashville Soccer Club led to a 4-0 victory over Hartford Athletic on Wednesday night at First Tennessee Park for Nashville’s fourth straight win. Ken Tribbett, Daniel Ríos, Alan Winn and Ropapa Mensah all scored in an 18-minute span in the second half to lead Nashville to its fourth straight win and boost it to 3rd place in the Eastern Conference standings.

Not only was it the fourth straight clean sheet and an extension of the club’s record winning streak, it marked the 100th career head coaching victory for Nashville SC’s Gary Smith.

Unfortunately, the victory didn’t come without a cost as Nashville captain Michael Reed was stretchered off in the early moments of the match with a leg injury.

After a scoreless first half in which the team had to reset following seeing their captain go down, Smith and his coaching staff changed the look of Nashville and it paid immediate dividends.

Tribbett headed home a corner from Taylor Washington, and with it the lid came off of the match. Five minutes later Ríos doubled the lead for his 15th goal of the season. Winn and Mensah then made it three and four with goals in the 64′ and 69′ minutes to give Nashville a comfortable advantage.

Here are three takeaways from the 4-0 win.

First Tennessee Park sat quiet, a rare sight, as Michael Reed lay on the field getting treatment just three minutes into the match. It was obvious that fans and players alike were rattled by the sight of the captain having to be stretchered off the field. While the comeback win and the four goals all drew cheers, the loudest cheer might have been when Reed was awarded the Man of the Match by unanimous write in vote to the Twitter poll.

2) Rios and Moloto Continue to Produce

Daniel Ríos and Lebo Moloto each tallied in their respective stat categories. Ríos slotted in his 15th goal of the season in the 56’ minute, putting the Mexican forward into a tie for the league lead and three ahead of the next best in the Eastern Conference. Moloto meanwhile added his ninth assist of the season, which puts the South African in second place in the league rankings and extends his Eastern Conference lead by two.

New centerbacks Jimmy Ockford and Forrest Lasso have still yet to know the feeling of allowing a goal as the club recorded its fourth consecutive clean sheet and set a club record with 376 straight minutes without allowing a goal. Unlike Nashville’s previous win in which it allowed no shots on target, Pickens was forced into two saves and saw a penalty sent wide to complete the shutout. Pickens now holds eight of Nashville’s 10 clean sheets on the season.

Nashville will drive for five straight wins with a home match set for a Saturday night against Bethlehem Steel FC at 7 p.m., presented by Piedmont/Tennessee 8-1-1. Tickets are still available for that match.