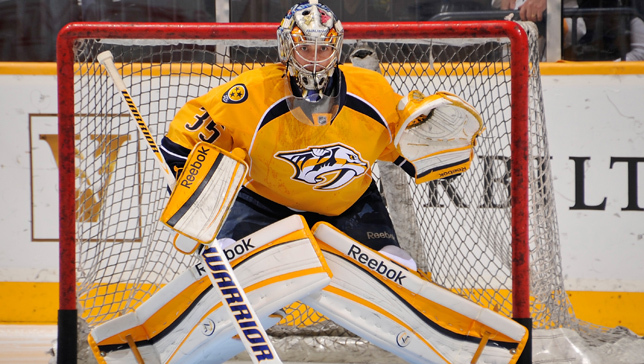 Pekka Rinne made a season-high 38 saves and Kyle Turris scored the game-winner with less than three minutes to play, as the Nashville Predators defeated the St. Louis Blues, 2-1, on Sunday evening at Bridgestone Arena.

The result gives the Preds a sweep of their home-and-home set – and the season series – against the defending Stanley Cup champion Blues. Perhaps more importantly, it’s Nashville’s first three-game winning streak since October, and the Preds are now currently just one point out of a Wild Card spot in the Western Conference.

As many said in the Nashville locker room postgame, this isn’t cause for popping champagne. However, for a group that has been searching for a spark most of the season, the past 48 hours certainly won’t hurt.

“October is a long time ago,” Rinne said of the previous three-game win streak. “I feel like we can be honest – it has been a struggle for the most part this year after October. I feel like we had a fairly good start, but after that it has been full of ups and downs. It shows in our game that we play with a lot of passion, just gutsy plays. I feel like we’ve changed the way we play a game. Obviously [Head Coach John Hynes is a big factor], but it’s also the players buying into it, and I think it shows.”

“We had great goaltending tonight, first and foremost,” Hynes said. “We were on our heels a little bit in tonight’s game, but I thought if you go from the net out – excellent game from Pekka… It’s not the recipe to win every game, but sometimes you have to win a game that’s gritty. It’s grinding, it’s not pretty, you need your goaltender to be probably your best player and you’ve got to have guys that just continue to hang in the fight and continue to battle. And we did that on the way to the win.”

After a scoreless opening period that saw Rinne, who was making just his second start in Nashville’s last seven games, turn aside 13 Blues’ shots, both clubs converted in the middle frame.

First, Craig Smith potted his sixth goal in his past five games, when he cleaned up a loose puck in front of the net and beat Blues goaltender Jordan Binnington for a 1-0 advantage. But approximately three minutes later, Tyler Bozak threw a pass toward the Nashville crease that deflected off of Dan Hamhuis and past Rinne to even the score after 40 minutes of play.

Rinne stopped 11 more Blues’ shots in the second, and his effort in the third – another 14 saves – gave the Predators a chance. At 17:48 of the final frame, Turris took advantage.

Off a turnover in the St. Louis zone, Filip Forsberg found No. 8 wearing Winter Classic white, and the forward snapped a shot from the left circle that found twine and sent the powder keg that was the hometown crowd into a frenzy.

“It was just a battle tonight,” Turris said. “They had a really good push back the whole game coming off of last night. Peks kept us in it. He played phenomenal. But just to stick with it, battle, grind it out and find a way to win, it’s really important for us right now in the situation we’re in. It was huge for us.”

No one deserved that praise more than Rinne, and he received a standing ovation during the third period from the Smashville faithful, as Bridgestone Arena flirted with playoff-level decibels. That was in large part due to the play of Rinne, and he earned every chant of “Pekka” that rained down.

“The guy is sick when he is in the net in front of us,” Smith said of Rinne. “Tonight, was a good example. He came out with some huge saves, seeing the puck well like he always does. I’m happy for him.”

“We’ve got the best fans in the League, for sure,” Rinne said. “It feels good, and I appreciate it a lot.”

Both games on the weekend against the Blues certainly felt like they were being played in April instead of February, and those are exactly the kind of challenges the Predators want at this point in the season.

Nashville knows points and wins are paramount no matter how they come, but to earn those in outings as intense as these seems to be bringing a little something extra out.

“It’s growing,” Turris said of his team’s confidence. “It’s the time of the year you want it to be growing too. You want to get hot at the right time. We have a lot of work to do and ground to make up, but at the same time, we’re trying to move in the right direction.”

“Huge two wins in a row against one of the top teams in the League,” Rinne said. “It was a gutsy effort tonight. Two timely goals, we played solid defense and just got it done. All in all, you look where we are, I think these last three games have really given us confidence. We kind of see the light now.”

Colin Blackwell and Matt Irwin were scratched for the Preds on Sunday.

The Predators are back at Bridgestone Arena on Tuesday night (at 7 p.m. CT) when they host the Carolina Hurricanes before another back-to-back set, this time with Chicago and Columbus.