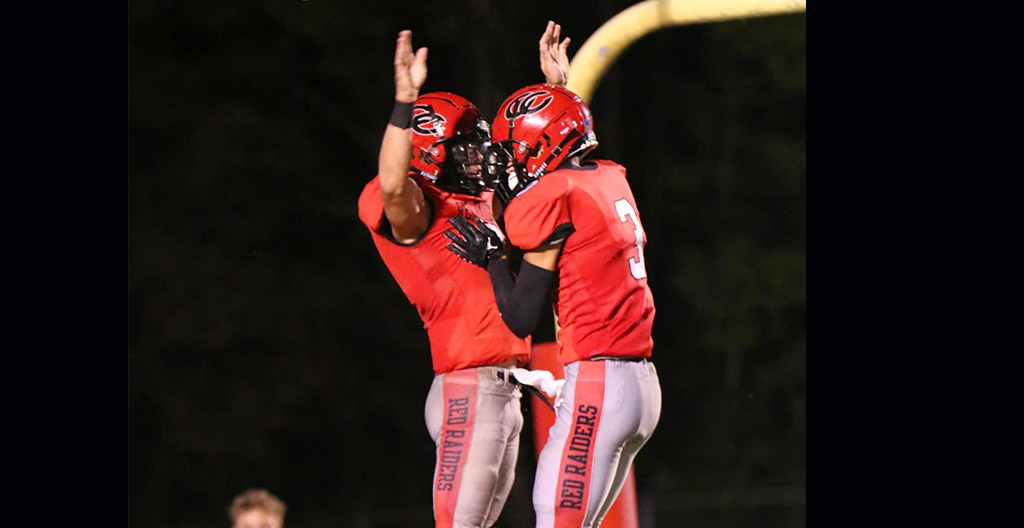 The Raiders stood in the center of the ring and went blow for blow with the defending Region 3-6A champions at Carden-Jarrell Field Friday night.

With 50 seconds left, the Raiders finally delivered the knockout.

After trailing from the opening kickoff, Coffee County scored 13 points in the final 8 minutes, including a touchdown run with 52 seconds on the clock to take their first lead of the night and beat the visiting Lebanon Blue Devils 27-23.

THIS GAME WAS BROADCAST LIVE ON THUNDER RADIO.

“We are in the drivers seat now,” said sophomore linebacker Jayden Carter during his postgame interview with Thunder Radio WMSR. “We [knew we] had to win up front tonight to even get our defense started. We had to stop (Sean Heath, Jaylen Abston and Anthony Crowell). Our secondary was just all over the place.

“It’s such a good moment to be with the guys,” added Carter. “Offense came out a little flat, but when it was crunch time they got it done. Defense, we had their back and we got it done.”

A win that came down to the wire.

The Raiders trailed 23-14 with 9:37 to play after Lebanon quarterback Jaylen Abston delivered a 34-yard touchdown pass to Nolan Sandefur.

But the Raiders did what was a theme all night – they responded. Quickly. Four plays later Cole Pippenger found senior tight end Jahlin Osbourne, who fought through tackles and rumbled 51 yards for a touchdown to cut the deficit to 23-21.

The Raider defense forced a quick 3-and-out from the Blue Devils who threw three straight incomplete passes and only used 20 seconds of clock.

That set up the Raiders game-winning drive. CHS marched 54 yards on 17 plays, capping it with a 1-yard touchdown from senior Konor Heaton to take a 27-23 lead with 52 seconds to play. It was Heaton’s second score of the night.

“It was a slugfest … I don’t think anyone is going home feeling nice physically,” said senior Red Raider left guard Kolby McCormick. “I’ve got to thank my brothers on the offensive line for taking half the abuse for me and helping me get upfield. Go Warpigs.”

The fast finish for Coffee County was a complete 180 from what was an ominous start. Lebanon’s Anthony Crowell took the opening kickoff of the game and went 80 yards untouched for a touchdown.

But Coffee County never stopped fighting. In fact, they answered Crowell’s touchdown 7 plays later when Heaton got loose up the middle to score from 33-yards out. That was the theme of the night for the Raiders – defeating adversity and answering every punch the Blue Devils threw.

“You saw guys hurting and they kept fighting together,” continued Greene. “That is exactly the vision I had when I came here. Just a bunch of people pulling together, loving each other and trying to scratch out wins. It was a beautiful thing tonight.”

The start of the second half was just as ominous for the Raiders as the start of the game. Trailing 10-7 at the half, Coffee County started the second half with the ball but Pippenger was intercepted 3 plays later. It was his second interception in as many passing attempts. Pippenger’s last attempt in the first half was picked off after the Raiders got a fumble recovery from Sahez Fernandez with a minute to play in the half in Lebanon territory.

Lebanon used the good field position after the interception to start the second half to score 6 plays later to take a 17-7 lead. But like every other blow the Blue Devils landed, the Raiders countered. Pippenger led the Raiders down the field on a 78 yard drive, capped by a 4-yard quarterback run for the score to cut the deficit to 17-14 late in the third.

Pippenger rushed for 98 yards on 17 carries , taking advantage of multiple designed quarterback runs in the gameplan.

“This is the biggest win we have had since I’ve been here,” added Greene. “[Lebanon] is a really good football team.”

With the win, the Raiders are effectively in the driver’s seat to a Region 3-6A championship. Granted they have more work to do. They are now 3-2 overall and 2-0 in region play with remaining region games against Warren County and Cookeville – both on the road.

“We are 2-0 in the region,” said Greene. “We are right where we want to be in terms of our pursuit of a region championship. We will celebrate this weekend and get back to work for Spring Hill, they are coming to our place for homecoming. We take it one game at a time. I know that sounds cliche, but that’s about all you can do.”

The Raiders will host Spring Hill at 7 p.m. next Friday, Sept. 23. It will be homecoming and Alumni Night. Alumni are encouraged to arrive early – recognition will take place on the field at 6:30 p.m. prior to the game. Homecoming festivities will be at halftime.