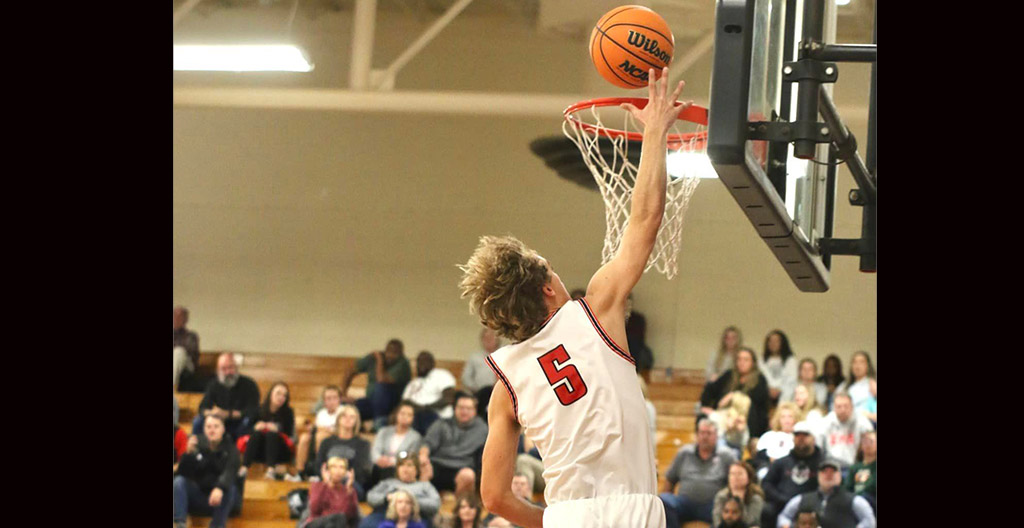 Jackson Shemwell goes to the glass for 2 of his 9 points Friday, Dec. 2, 2022 against Tullahoma. -- Photo by Holly Peterson, Thunder Radio | Thunder the Magazine

Tullahoma didn’t score a single point in the fourth quarter.

Coffee County Central’s Red Raider boys completely shutout the Wildcats in the final period and turned a 36-25 third quarter lead into a 43-25 win over their rivals from across the county Friday night in Manchester.

Coffee County actually controlled the lead throughout. The Red Raiders held the Wildcats to just 9 points in the first half and took a 27-9 lead into the locker room.

The Cats cut the deficit to 9 points at 1 point in the third quarter after a quick 6-0 run to start the half and a couple of 3 pointers form Knani Johnson. But the Raiders kept their distance and never let the game get any more interesting than that.

Junior forward Jackson Shemwell finished with 9 points for the Raiders – 8 coming in the first half. He was named Thunder Radio’s Stone Fort Mortgage Player of the Game.

The Raiders were led in scoring by senior Dayne Crosslin, who nailed a couple of 3-pointers and drove to the bucket for a pair of nice finishes. Meanwhile, junior Cooper Reed quietly dropped in 12 points.

The Raiders moved to 5-4 on the year with the win. They will have a busy next week, hosting Lincoln County on Monday, Lighthouse Christian Tuesday and Blackman Friday. All of those games will be broadcast live on Thunder Radio – 107.9 FM, 1320 AM, Manchester Go app and thunder1320.com.