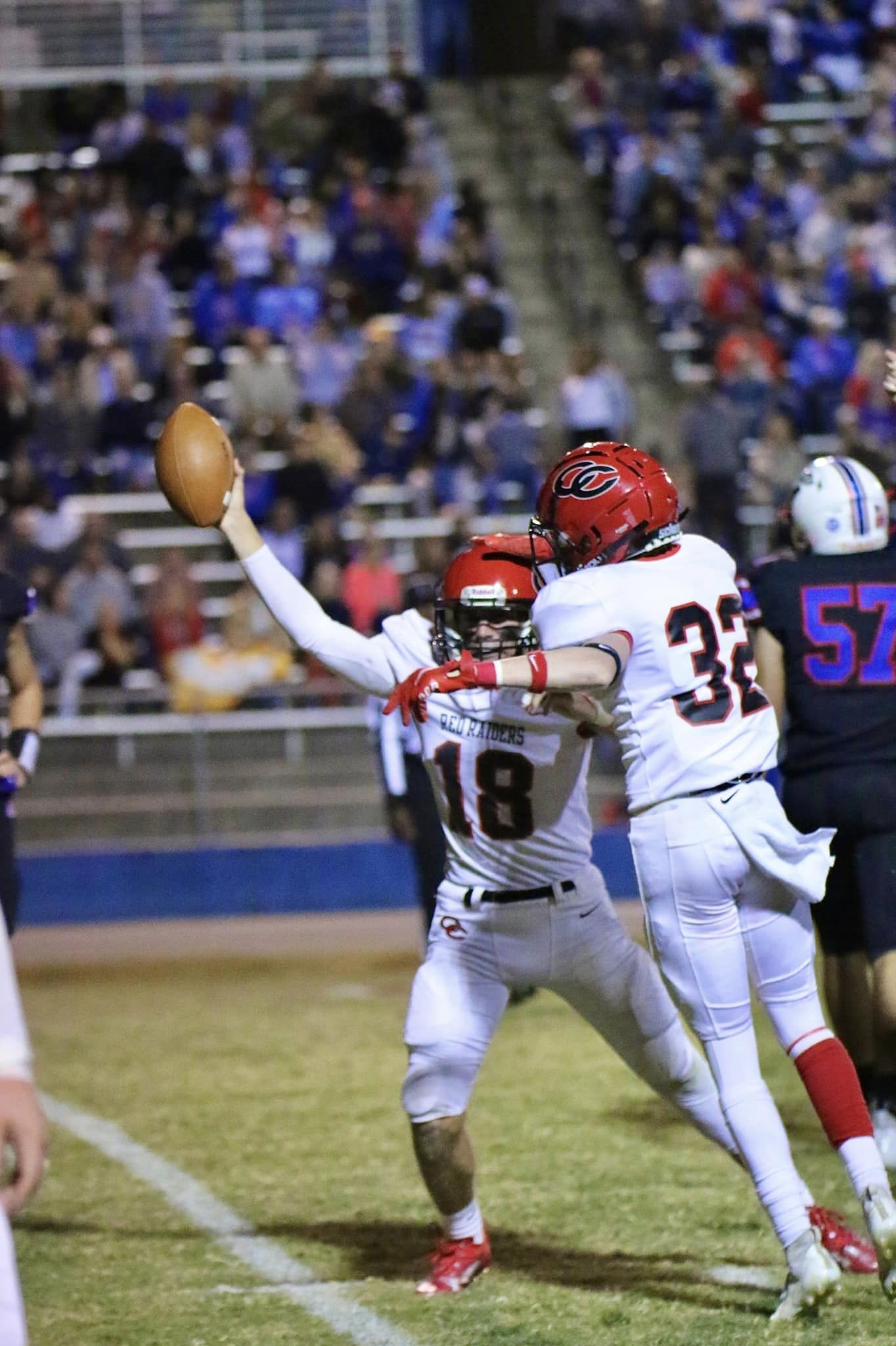 It was never really close in McMinnville Friday.

The Red Raider defense bowed up on the first drive, the offense started out full throttle and Coffee County jumped on the Warren County Pioneers 34-3, eventually winning 34-17 to ruin homecoming for the Pioneers.

The fear for the Raiders was Warren County’s ball-control offense.

But Coffee County flipped the script on the Pioneers, sustaining scoring drives of 12 plays and 10 plays in the first half to take a 14-3 lead into the locker room. Warren County actually took the ball first and looked to be in rhythm, getting all the way to the Raider 4-yard line thanks in part to a great catch by Nate Elrod on third and long.

The Raider defense stonewalled the Pioneers, though, backing them up to the 7 before eventually forcing a 23-yard field goal from Beckham Scott.

After that it was all Raiders. In fact, the Pioneers wouldn’t get back inside the red zone until the fourth quarter.

Sophomore quarterback Cole Pippenger capped the first Raider drive with a 12-yard run into the end zone. The Raiders ate 4:30 off the clock on the 12-play drive that covered 62 yards. The Raiders marched 77 yards on their next drive in just over 4 minutes. This time it was Konor Heaton taking an option toss and rumbling into the end zone from 20 yards away to put CHS up 14-3 at the break.

The Raiders took the opening drive of the second half and effectively dashed any Pioneer hopes. This time it didn’t take as many plays. Pippenger got loose on the 8th play of the drive for a 34-yard touchdown scamper. The Raiders got a fumble recovery from Brendon Sheppard on the third play of the next series and scored three plays later, a 1-yard rumble from Heaton. It was Heaton again fo the final Raider TD – a 10-yard scamper late in the third quarter.

The Raiders played half of the fourth quarter in the mercy rule with a comfortable 34-3 lead. The Pioneers added two late touchdowns in garbage time.

Pippenger finished with 81 yards on the ground on 8 carries. After starting 1-of-4 passing, Pippenger found a rhythm with Jahlin Osbourne and Travis Martin and connected on 7 straight to finish 8-of-11 for 85 yards. Osbourne caught 5 of those for 50 yards and Martin 2 for 22.

Heaton was solid yet again on the ground. The senior tailback surpassed the 100-yard mark for the third time this season, with 109 yards on 19 totes and 3 scores – giving him 18 scores on the year (16 rushing, 2 receiving).

-The Raiders picked up their 5th win of the season – matching last year’s win total. They will have next week off before wrapping their region schedule on Oct. 14 in Cookeville. A win in that game will give the Raiders a Region 3-6A championship. It would also mark the most wins for the program since 2007.

-The CHS defense got a sack in the game courtesy of Jayden Carter and Blayne Myers – meaning $100 will be donated to the Dennis Weaver Dream for Weave Foundation courtesy of Thunder Radio, Al White Ford Lincoln, Bush Insurance and Unity Medical Center.