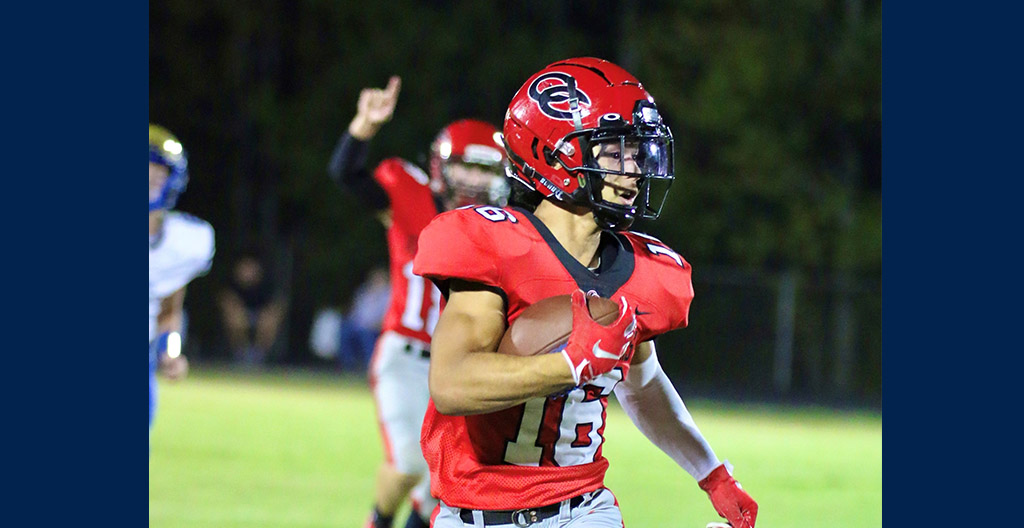 Caiden Martin makes his way to the end zone after the first of his two interceptions Friday night, Sept. 2, 2022. Brendon Sheppard is pictured celebrating in the background. (Photo by Holly Peterson, Thunder Radio | Thunder the Magazine)

The freshman Red Raider took the opening kickoff nearly 70 yards to set up a short score, intercepted two Eagle passes and took one of them in for a score as the Raiders routed visiting Shelbyville 39-13 in the Region 3-6A opener Friday night at Carden-Jarrell Field.

“It felt good,” said Caiden Martin. “Being a freshman I didn’t expect to be able to break all those tackles (on the opening kickoff return). I’m a little mad I didn’t score, though.”

(Martin was named Sir Pizza Player of the Game by Thunder Radio).

Martin didn’t score, but he setup the Raiders at the 1-yard line and senior tailback Konor Heaton punched it in one play later and the Raiders were off and running. It was the first of two scores for Heaton, who punched through later on a short yardage situation and rumbled 36 yards for a score to put the Raiders up 13-0.

Shelbyville finally scored on an interception return for a score by Theo Washington, who caught a tipped ball and raced 50-yards for a score to keep Shelbyville close for a little while. The Eagles other score came on a desperation deep ball from Jake Preston to Micah Threatt for a 52- yard score.

“When we started being a little more physical at corner we stopped that deep ball,” explained CHS head coach Doug Greene during his postgame interview with Thunder Radio.

Other Raider scores in the first half came when sophomore quarterback Cole Pippenger connected with Jahlin Osbourne for a 39 yard score with 5:35 to play to go up 19-7. Then with 4 seconds on the clock Pippenger capped a quick 7-play, 73-yard drive when he connected with Travis Martin from 24 yards out with just 4 seconds in the half to go up 25-13.

It wasn’t the last time Pippenger would find Martin. He hit him again from 21-yards out to cap a 63-yard drive with just over 5 minutes to play in the third quarter.

“They kept creeping their safeties up begging us to throw it deep, so we did,” said Greene.

Caiden Martin’s interception return from 60-yards out capped the scoring.

“This is a big step for us,” added Greene. “We are 1-0 in the region. We want to be in the playoffs, host a playoff game, win in the playoffs and this is the first step.”

Unofficially, Heaton rushed for 87 yards on 11 carries and a pair of scores. He didn’t play in the second half. Kendall James stepped in and ran for 66 yards on 10 touches. Pippenger added 28 yards on the ground on 8 carries.

Pippenger was 10-20 through the air for 3 scores and two interceptions.

“We had some bad luck. I think on both of those interceptions they went through our hands,” explained Greene.

Martin caught 6 balls for 87 yards and Osbourne 2 for 40. Osbourne didn’t play in the second half after leaving with a shoulder injury.

Shelbyville’s offense was left inept by a swarming and physical Raider defense that got two interceptions and three sacks. (Every sack this season means a $100 donation to the Dream for Weave Foundation thanks to Thunder Radio, Al White, Unity Medical and Bush Insurance).

“All the credit to coach (Roger) Haynes tonight,” said Caiden Warren in the postgame interview with Thunder Radio.