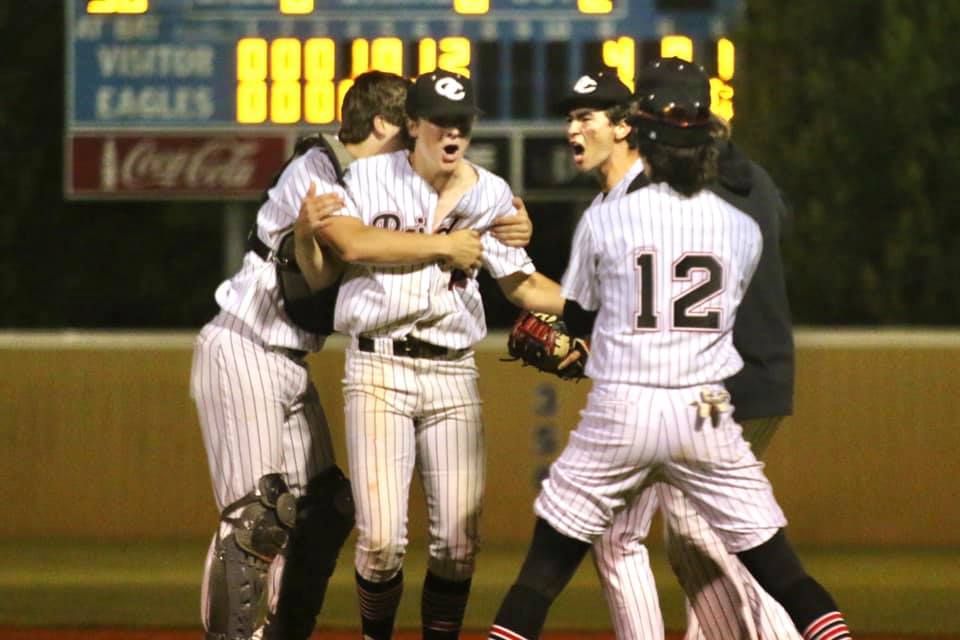 Griffin Meeker shall now be known as Mr. Clutch.

The senior right-hander etched himself into Red Raider baseball lore on Monday night when he took the ball in an elimination game and tossed a four-hit, complete game shutout against cross-county rival Tullahoma to lead the Red Raiders to a 4-0 win and extend their season. Tullahoma had swept Coffee County when the two teams met in March.

Monday in Shelbyville, Meeker went seven innings and needed just 91 pitches to do it. He allowed four hits and walked 2 while striking out 5. He avoided trouble most of the night, except the bottom of the sixth when the Wildcats got the tying run on second base with one out. Meeker responded with a strikeout and a ground out to end the threat.

THIS GAME WAS BROADCAST LIVE ON THUNDER RADIO. CLICK HERE TO LISTEN TO THE REPLAY.

At the plate, Coffee County broke the scoreless tie with a run in the fourth inning and never looked back. A ground ball on the infield hit by Hayden Hullett allowed Nolan Jernigan to scamper home to take a 1-0 lead. A Jacob Holder double off the fence in the sixth inning sent Carter McKenzie across the plate to extend the Raider lead to 2-0.

The Raiders added some insurance runs in the top of the seventh. Meeker singled in a run, then Nolan Jernigan doubled after his line drive snuck over the head of Jacob Dixon to score Meeker.

Meeker’s performance on the mound makes it 14 consecutive shutout innings for the senior in the District 8-AAA tournament.

The win improves the Raiders to 21-10 on the season. CHS needs to win one more game to reach the district championship and lock up a spot in the Region 4-AAA semi-finals. The Raiders will play Lawrence County Tuesday night in Shelbyville at 6 p.m. The loser’s season is over. CHS hasn’t played for a district championship since 2011 – which was their third title in a three-peat run.

Tullahoma’s season ends with the loss.