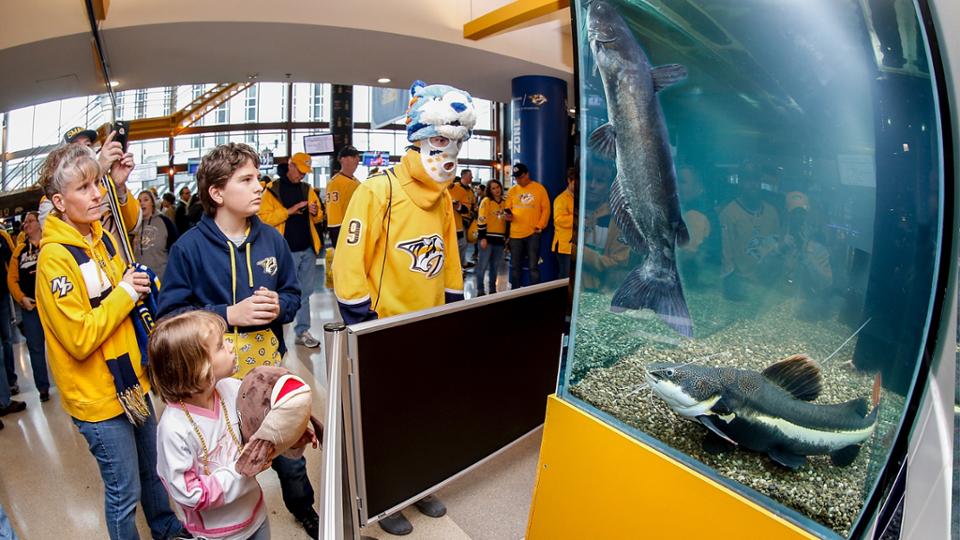 Most of Nashville is sheltered at home due to coronavirus concerns, and the Predators’ pair of catfish are among those participants.

These bottom feeders typically reside inside of their habitat in the AT&T Fan Information Center at Bridgestone Arena, but as Nashville Mayor John Cooper’s “Safer at Home” ordinance went into place and the closure of non-essential businesses took effect, it was necessary for the arena to close.

A majority of Predators front-office employees had already been working from home with the pause of the NHL season, and on Monday, as personnel became further limited in the arena, the catfish were moved to a secure location where they will continue to be fed and cared for during the quarantine.

As many of you know, the catfish didn’t end up residing at 501 Broadway by happenstance, but do you recall how the whiskered creatures came to be part of Predators lore?

The first documented sighting of a catfish in the building came on Oct. 30, 2003, when the Predators took on the Detroit Red Wings – arguably the franchise’s fiercest rival in the early days – in Nashville. During the game, a fan managed to toss a catfish over the glass and onto the ice after the Preds scored their first goal of the night.

So, why do it against Detroit? Red Wings fans famously threw octopi from the Detroit River onto the ice during big games, with the tentacles representing the only eight wins it used to take to win the Stanley Cup (it now requires 16 victories to hoist the prize).

With the rivalry between the Preds and Wings alive and well back in 2003, the idea of adding a catfish to the mix was born. The tradition has continued to this day, and it garnered national attention during Nashville’s run to the 2017 Stanley Cup Final.

The tank was added to the home building in the spring of 2018, and since then, thousands of fans have stopped to take a gander at the fish that has etched its place in Predators history.

So, until Bridgestone Arena is open and full of members of the Loyal Legion once more, Smashville’s catfish will remain safe until they – and we – can return home again.