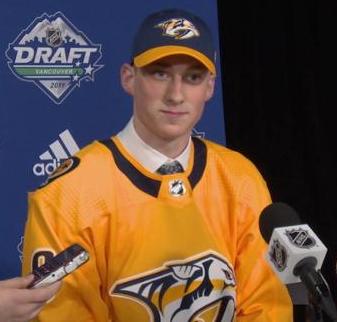 Philip Tomasino was the first, and on day two of the 2019 NHL Draft, seven more players heard their names called by the Nashville Predators.

In all, five forwards, two defensemen and one goaltender are now a part of the Nashville depth chart, a positive weekend for the club as they look to improve their prospect pool.

“We’re happy with the way it went,” Preds Assistant General Manager Jeff Kealty said of the draft. “We had to adjust to things on the fly a little bit with the trade that went on, but we were ready for it. We were prepared, and we thought that we got a lot of guys that we wanted, a lot of guys we had targeted and talked about. That’s always what you hope for, and time will tell. It takes a few years for it to all play out, but we were happy with the way the weekend went.”

Thanks in part to a trade Saturday morning that sent P.K. Subban to New Jersey, the Preds began the day of drafting in the second round by selecting winger Egor Afanasyev with the 45th overall pick. The 6-foot-4 Russian, who skated with Muskegon of the United States Hockey League last season and is slated to join the Windsor Spitfires of the Ontario Hockey League this fall, has all the makings of a power forward and says he models his game after Blake Wheeler of the Winnipeg Jets.

“I’m excited for sure, and I can’t wait to get things started with Nashville,” Afanasyev said. “I’ve heard it’s a great team, and I’ve heard a lot of NHL players say it’s hard to play against them because the fans are going nuts [at Bridgestone Arena]. It should be fun.”

The Predators had Afanasyev ranked higher than where they were able to snag him, and the group was thrilled to come away with a player they feel has tremendous potential.

“He’s a big, strong, skilled offensive forward,” Predators North American Scout David Westby said. “He can protect the puck well and is strong on the boards and in the corners. I’d say he’s more of a shooter than a playmaker, but he’s hard to play against. I think he’s a top-six forward and with his time in junior hockey will be a productive player at the NHL level.”

Round 3 brought about the 65th overall pick to Nashville, and they selected Alexander Campbell, a skilled, speedy centerman. Campbell skated with Victoria of the BCHL last season, recording 21 goals and 67 points in 53 games.

“It’s a huge honor, and I’m super excited,” Campbell said of being selected by Nashville. “It’s a team I love to watch, definitely. They have a heck of an organization; great group of forwards, defensemen and goaltenders…. To be sitting here with a Predators jersey on, it doesn’t even feel real to me.”

The fourth round saw the Preds make two selections, the first of which went to defenseman Marc Del Gaizo out of UMass at No. 109. The 5-foot-9 defenseman potted 13 goals and 29 points during his freshman season with the Minutemen, numbers that led him to a spot on the Hockey East All-Rookie Team.

Just eight slots later, Nashville went with defenseman Semyon Chistyakov out of Ufa, Russia. Ranked much higher than 117 by a number of pre-draft publications, the 5-foot-10 blueliner helped Russia to a silver medal at the U-18 World Junior Championship and was named one of the team’s three-best players at the tournament.

The Predators snagged a goaltender in Round 5, choosing Ethan Haider from the Minnesota Magicians of the NAHL. Committed to Clarkson University for the 2020-21 season, Haider posted a 2.35 goals-against average and a .926 save percentage in 37 contests on his way to being named the NAHL Midwest Goaltender of the Year.

Isak Walther heard his name called in Round 6 by the Preds at pick No. 179, a winger who has skated with the Södertälje SK organization in Sweden. He moved up to the Södertälje SK J20 club by the end of last season after posting impressive numbers at the junior levels.

Finally, at pick No. 210, it was Finnish forward Juuso Parssinen who got to come out of the crowd at Rogers Arena and slip on the final Preds jersey of the 2019 Draft.

“It’s amazing, and it’s a dream come true,” Parssinen said. “There weren’t many picks to go, but I got drafted, so that’s the main thing.”

“He is a big centerman who plays a good all-around game,” Predators European Scout Janne Kekalainen said. “He has some good offensive abilities he has to use a little more. He has a heavy shot, is good on faceoffs and protects the puck really well. Like I said, he needs to use what he has more actively to produce some more offense. He has a terrific mentality.”

Tomasino was Nashville’s top prize from the draft, with Preds scouts eager to see their new centerman at Development Camp in Tennessee next week and beyond.

“He’s a really dynamic player,” Predators Chief Amateur Scout Tom Nolan said. “He attacks, plays with high-end speed and has real good instincts with and without the puck. He’s a top-six forward, we feel. He has a great personality and will fit in well as time goes on.”

In addition to the Subban deal, the Preds made a minor trade, also with New Jersey, sending forward Adam Helewka to the Devils for future considerations.

Predators Development Camp begins on Tuesday in Nashville with on-ice sessions at Centennial Sportsplex. A full schedule of events for Nashville’s top prospects can be seen at: https://www.nhl.com/predators/team/practice-schedule