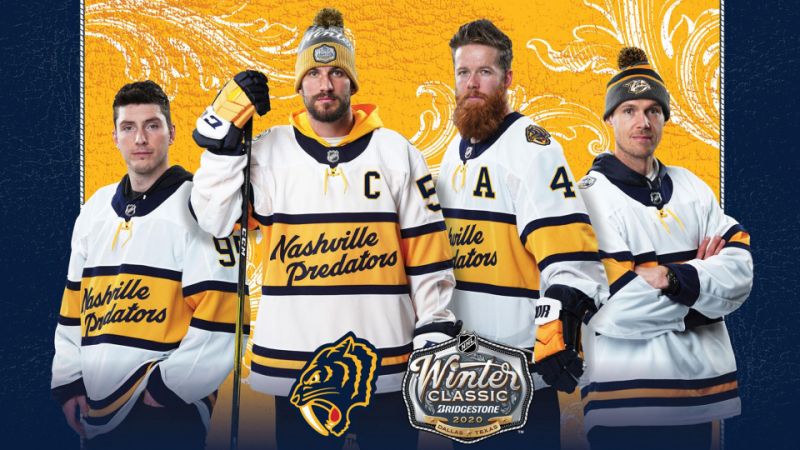 Four unanswered goals for the Stars erased a 2-0 lead for the Nashville Predators and bestowed a 4-2 victory to Dallas in the 2020 Bridgestone NHL Winter Classic at the Cotton Bowl.

The loss on New Year’s Day was difficult to stomach for the Predators. They appreciated the experience and significance of playing in the NHL’s premier regular-season event, but to fall in game with such pomp and circumstance – and one in which they held a multi-goal lead – left the group deeply disappointed in the final result.

“This game, it didn’t feel like just a regular-season game, it felt like something bigger,” Preds goaltender Pekka Rinne said. “I feel like it just makes it a little bit worse, makes it sting a little bit more than any other game.”

“It was a playoff type of game,” Predators defenseman Mattias Ekholm said. “[In the third period], it’s not good enough letting three goals in a big game, and it’s disappointing.”

The outdoor game began with a scary start, as defenseman Ryan Ellis left the game following an elbow to the head from Stars forward Corey Perry. Nashville received a 5-minute power play from the hit, and the Stars took a delay of game penalty to give the Predators a 5-on-3. Matt Duchene tallied on the two-man advantage to give the Preds a 1-0 lead, and just moments later, Dante Fabbro made it 2-0 with another power-play goal.

Rinne denied the Stars on a penalty shot midway through the first to keep it at 2-0, and that score held through nearly two-thirds of the game. But late in the second, the Stars finally solved Rinne with a power-play goal of their own. In the final frame, Dallas scored three times in the opening 6:35, and although the Preds had a surge in the second half of the frame, they couldn’t find a way to put another puck in the net.

“The second period, I think, is when the game changed and we stopped going after it,” Duchene said. “We got two goals, and we sat back a little bit maybe trying to just prevent more than attack. What made us good in the first is we attacked… I thought the third [period] was 50-50 [in chances], but we didn’t start doing it until it was 4-2, so it’s disappointing.”

Despite the result, the spectacle of the day wasn’t lost on the participants. More than 20,000 of the 85,630 fans in attendance – the second-highest total in NHL Winter Classic history – came from Nashville, and the support was felt from start to finish.

Unfortunately, that’s what makes the final tally even tougher to handle.

“It was such an experience playing out there, and it was so cool having all these people here from Nashville,” Rinne said. “You could hear them, and it was a blast. It was awesome, and it’s an experience you’ll remember. I feel like that’s why it hurts a little bit more. You want to make this a special game, and it was nonetheless. Even though we lost, it was special.”

“The National Hockey League did an unbelievable job putting on this event,” Preds Head Coach Peter Laviolette said. “We’re very fortunate to be a part of it. Hockey down in Texas, a couple of Southern teams going the way we did, it was an incredible day. You want the score to go in a different direction, but overall the atmosphere was excellent.”

The first game of the decade is part of a larger road trip for the Predators, and now that the vintage attire has been packed away, they’ll head west to California in search of wins in Los Angeles and Anaheim this week.

The outcome outdoors leaves an empty feeling, but Nashville has no choice but to embrace what’s ahead as the year 2020 arrives.

“At the end of the day, whether we lost at home or we lost here at American Airlines Center, it’s the same thing in the standings,” Duchene said. “We can’t we can’t bury ourselves here. We have to stay positive and keep pushing. We have games in hand on a lot of teams, and we have some ground to make up, but we’ve got over half a season to do it.

“We’re going to shake this one off. We’ve got a couple days and get ready for L.A. and then Anaheim back-to-back, and those have to be wins for us.”

Ryan Ellis left Wednesday’s game and did not return with an upper-body injury.

Preds Captain Roman Josi assisted on both of Nashville’s power-play goals in the first period to extend his career-high point streak to eight games. He also became the first defenseman in Preds history to reach the 40-point mark in fewer than 40 games.

The temperature at puck drop was 55 degrees fahrenheit, making this the warmest Winter Classic in NHL history.

The Winter Classic now complete, the Predators will head out to California for a weekend set against the Kings and Ducks on Saturday and Sunday, respectively, before returning home for a single game against the Bruins on Tuesday.