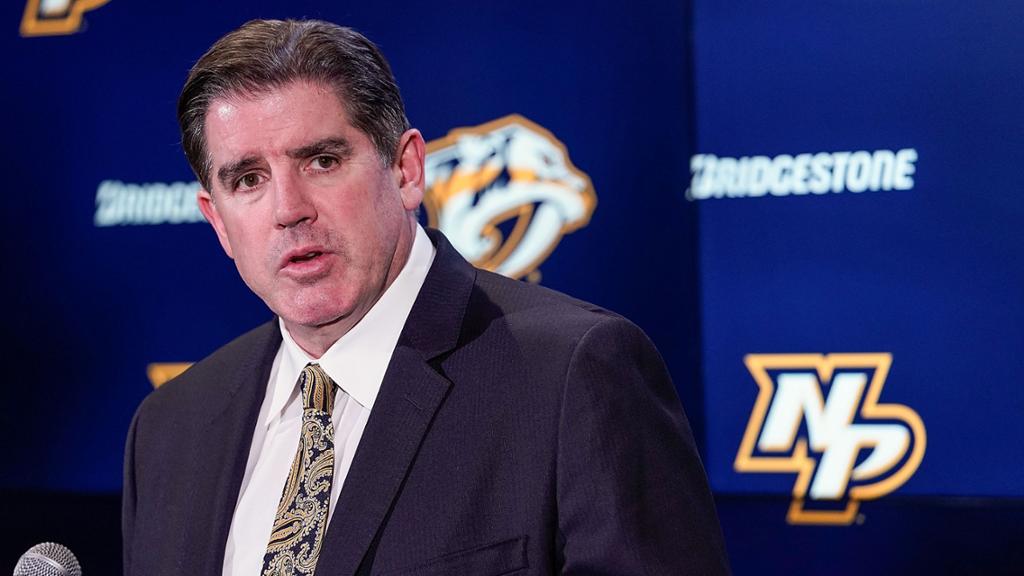 The Nashville Predators begin their 22nd NHL season presented by Fifth Third Bank with a four-game homestand beginning on Oct. 3 against the Minnesota Wild, where the team will unveil its second Central Division title banner in the Bridgestone Arena rafters. The homestand continues with games against the Detroit, San Jose and Washington before the team embarks on a three-game road trip out west, where it will take on Los Angeles, Vegas and Arizona.

Nashville rounds out its October slate with two separate three-game homestands separated by a road game on Oct. 26 against last season’s Presidents’ Trophy winners, the Tampa Bay Lightning. The first of three straight games at Bridgestone Arena runs from Oct. 19 to 24 with contests against Florida, Anaheim and Minnesota, and the second, which includes a Halloween matchup vs. Calgary, features the Preds taking on Chicago and the New York Rangers from Oct. 29 to Nov. 2.

November continues with the Preds traveling to Detroit, Colorado, San Jose and Vancouver as part of a four-game road swing from Nov. 4 to 12. Nashville returns home for three games against Chicago, Winnipeg and Vancouver from Nov. 16 to 21 before a home-and-home with the defending Stanley Cup Champion St. Louis Blues on Nov. 23 and Nov. 25. A home game against Vegas follows, with the Preds playing the first of 12 back-to-backs on Nov. 29 to 30 against Carolina and Florida to close out the month.

December is headlined by a Dec. 7 matchup against New Jersey in what will be former Preds defenseman P.K. Subban’s first game back in Nashville following the June 22 trade that sent him to the Devils. Home games against San Jose and Dallas – with a trip to Buffalo in between – follow before the Preds begin a four-game road trip out east. The trip begins with a back-to-back against the New York clubs – the Rangers on Dec. 16 and the Islanders on Dec. 17 – and finishes up with games against Ottawa and Boston. Home games cap both ends of the NHL’s holiday break, with Nashville taking on Arizona on Dec. 23 and Pittsburgh on Dec. 27. Nashville fulfills another back-to-back to wrap up December, visiting the Penguins on Dec. 28.

Nashville kicks off the new year with the 2020 Bridgestone NHL Winter Classic against the Dallas Stars at the Cotton Bowl on Jan. 1. It will be Nashville’s first-ever outdoor game and the event will be the first one to be hosted in the South.

Following the Winter Classic, the Preds head west to take on Los Angeles and Anaheim in a back-to-back on Jan. 4 to 5 before returning home on Jan. 7 to face Boston. A three-game road trip to Chicago, Winnipeg and Edmonton follows, and then the Preds come back to Bridgestone Arena to play the Ducks and Sabres before the League-mandated bye week, which runs from Jan. 19 to 24. Preds action resumes after the bye week and NHL All-Star Weekend – held this season on Jan. 25 to 26 in St. Louis – on Jan. 27 against Toronto at home; the month’s slate concludes with a back-to-back in Washington and New Jersey on Jan. 29 to 30.

After a home game against Vegas on the first of February, the Predators head out for a four-game road trip on Feb. 4 to 10 with stops in Winnipeg, Calgary, Edmonton and Vancouver. A game against the Islanders, a home-and-home with St. Louis and a trip to Chicago are on the docket for the middle of February. Nashville’s season-long five-game homestand, set for Feb. 22 to March 2, will see the team take on Columbus, Ottawa, Calgary, Colorado and Edmonton at Bridgestone Arena.

March – Nashville’s busiest month with 15 games scheduled – includes eight contests against Central Division foes, starting with a trip to Minnesota on March 3 and two consecutive tilts vs. the Stars on March 5 to 7. The second game against Dallas kicks off the team’s season-long five-game road trip, which features contests against Montreal, Toronto, Columbus and concludes on March 15 against the Wild. Other games on the March schedule include home tilts against Colorado, Philadelphia, Winnipeg and Los Angeles and trips to Chicago, Arizona and Colorado.

Two of the final three games of the regular season take place in Nashville from April 1 to 4, with the Predators hosting Montreal and Minnesota and traveling to Philadelphia for their final road game on April 2. Nashville closes out its home slate and the 2019-20 season the way it began, with a game against the Wild on April 4.

– The Preds open at home for the first time since the 2016-17 season. The team’s four-game homestand to begin the campaign is its longest to start a season since 2003-04.

– Nashville plays at home 12 times on Saturday, 11 times on Thursday and 10 times on Tuesday during the 2019-20 regular season.

– The team’s longest road trip of the season is five games long and takes place from March 7-15, with games in Dallas, Montreal, Toronto, Columbus and Minnesota.

– Nashville’s longest homestand is five games from Feb. 22 to March 2 and features contests against Columbus, Ottawa, Calgary, Colorado and Edmonton.

– October sees the Preds play nine home games, their most in a single month in 2019-20.