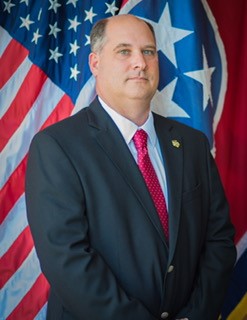 It has been long assumed and common knowledge that Coffee County Sheriff Chad Partin would seek re-election to a second term as sheriff.

Partin officially announced Friday that he plans to do just that. See his full announcement below. Partin will be running as a Republican, pitting him against Alethia Rawn in the upcoming May primary. The winner of that race will face-off with Independent candidates Brandon Tomberlin and Danny Ferrell in the August general election.

Hello, I am Sheriff Chad Partin. I would like first and foremost to thank you for letting me serve you, the citizens of Coffee County as Sheriff. In 2018 you elected me to my first term as Sheriff. We hit the ground running by putting in place what was promised. The new administration had a plan that was put in motion to achieve the goals that were desperately needed. The first day School Resource Officers were placed in all rural schools. This has been a great program for the safety and security of our children, teachers, and system staff. We are very proud of the work that the SRO’s have done and will continue to do into the future. Training was an area that was heavily focused on by this administration with an emphasis on the jail and court security. Training is now a daily conversation within the department to keep the staff abreast on safety, security, and self-protection. Over the years the Coffee County Jail has grown tremendously. This unfortunate growth also brings on giant financial responsibilities. We have taken a business model approach to stay successful within the budget. Hundreds of thousands of tax dollars have been saved in this term. These savings have allowed the county to invest into other areas of need. We are very excited about the financial position the county has today. During this first term as your Sheriff many goals and projects have been achieved and completed far surpassing my expectations. The Sheriff’s Office strives every day to provide quality protection and services needed in Coffee County. This office will continue our duty of keeping the peace, maintaining, and securing the jails and courts, also diligently serving warrants and civil process.

For 30 years I have been dedicated in serving the citizens. For those who may not know me I have served as a Corrections Officer, Deputy Sheriff, Patrol Supervisor, and Investigator. I have also served at the District Attorney’s Office as a Drug and Violent Crime Investigator. I have also served as Emergency Management and Homeland Security Director for Coffee County. All these duties and experiences built the foundation for me to be elected nearly four years ago. Soon after being elected, I had the honor of being appointed to the State of Tennessee Peace Officer Standards & Training Commission (P.O.S.T.). As a freshman sheriff I was elected to be vice chairman of the board and then elected to chairman where I have served for over a year. This Commission is responsible for developing and enforcing standards and training for all local police officers.  P.O.S.T. is the primary regulatory body for Tennessee law enforcement. As sheriff I have served on many other boards and committees that relate to daily duties of the Sheriff’s Office. I am also a member of the State Sheriff’s Association Legislative committee. This committee works hard every year to ensure that good laws are passed, and unnecessary ones fail.  I am blessed to have the loving support of my wife Leann and two children, Maggie and Will. I have been absent or away more times than I can remember over the years, but they understand the sacrifice to serve the people. My family and I humbly ask for your support and vote in the upcoming Republican May primary. “Promises Made-Promises Kept” Re-Elect Chad Partin Sheriff of Coffee County.