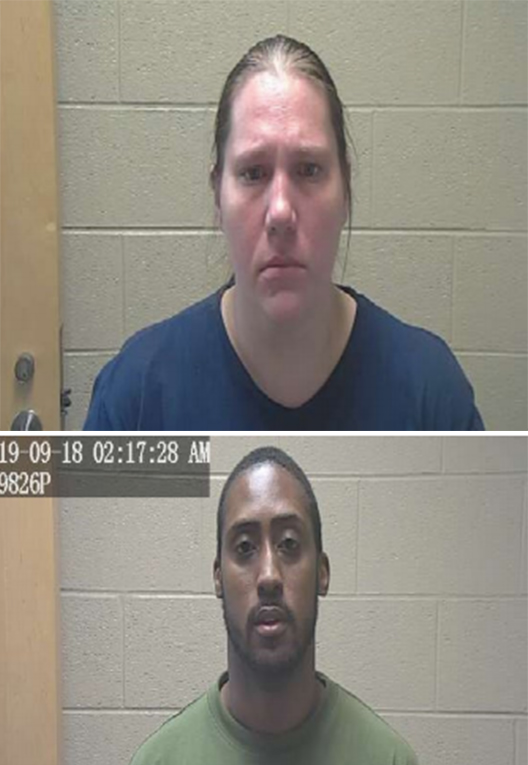 (EDITOR’S NOTE – Some details in this story may be disturbing to some readers.)

Arrested on Tuesday night, Sept. 17 were Andrea Lynn Arthur, 31, and Alonso Dewite Maxin, 35. Both charged with aggravated child abuse or neglect and more charges are expected, according to CCSD.

Investigators found the children after a call for a welfare check on Aug. 20 to a trailer park at 1483 Riddle Rd. The caller advised police that a small female child was running around the park, going through trash cans for food and water.

When sheriff’s investigators James Sherrill and Stephen Sharketti arrived and attempted to speak to the child, she ran up a mattress that was leaned against a trailer and went through an open window, according to Sherrill’s report.

Upon making entry to the residence, investigators discovered disturbing conditions.

According to Sherrill’s report, the two-bedroom, one-bath, single-wide mobile home smelled of urine. Sherrill and Sharketti discovered a bedroom that was “almost completely empty.” The report states that there was no mattress for the children to sleep on and there was feces on the floor and the walls of the bedroom. One child was discovered in the bedroom and appeared to be very scared, according to Sherrill.

On the floor of the master bedroom was a mattress, along with various clutter. In the living room, investigators discovered seven children, ranging from age one to 10. All of the children’s ages are as follows: 10, 9, 6, 5, 4, 3, 2 and 1. Also in the living room investigators discovered roaches “all over the floor,” cat and dog feces and urine, food and a lot of trash. The report states that the children appeared dirty, very malnourished, clothing did not fit and it appeared that they had lice.

The report also states that the children do not attend school. Arthur stated that she home-schooled the children, however, Investigator Laura Nettles stated in the report that the home school does not appear to be legitimate.

The children told investigators that they get locked in the bed room at night and when they get in trouble. The report states that boxes of food are rationed to the children.

All eight children were immediately removed from the home by the department of children’s service. Sheriff’s Department officials had Vanderbilt conduct an examination on the children before arresting the parents. More charges are expected to be filed. Maxin and Arthur claimed to be the parents to all of the children.

Arthur and Maxin were arrested Tuesday night and are each being held on $80,000 bond. More details to this story will be released as they are available.