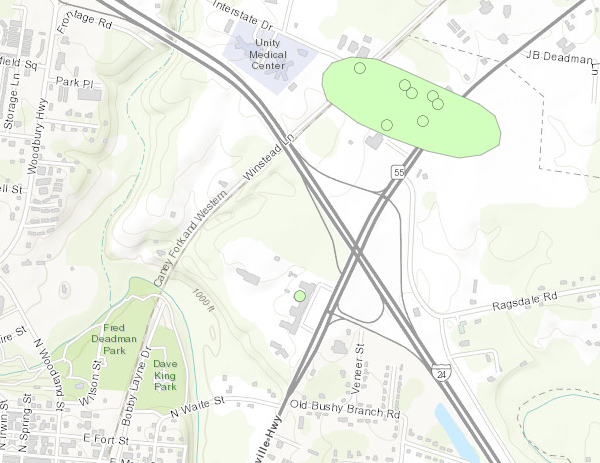 The National Weather Service storm survey team is reporting that most of the storm damage caused in Coffee County on Wednesday (Oct. 12) was caused by a microburst with winds around 85 miles per hour.

While there was widespread damage across Coffee County that included downed trees and powerlines form powerful straight-line winds, the storm survey team report focuses on an area just east of Unity Medical Center and north of Interstate 24 exit 111, where the most intense damage was found.

According to NWS, “a small but intense half mile long by 250 yards wide microburst struck an area along Interstate Drive from around Monogard Dr. to Highway 55.”

The report goes on to detail the storm damage in that area, including sheet metal blown off a building into a street sign on Monogard Dr., large sections of the sheet metal roof also being blown off the Coffee Farmers Co-op building and a BP gas station canopy losing metal panels on the east side of the roadway. One home also lost a large section of roof as well as a front porch column. Less than a half mile south of that clustered area of damage the roof to the gym of Raider Academy suffered significant damage.

According to National Weather Service’s report, damage was blown from northwest to southeast and wins were estimated up to 85 miles per hour. Those speeds are equivalent to a strong EF-0 or a weak EF-1 tornado.

A microburst is a localized column of sinking air (or a downdraft) within a thunderstorm and is usually less than or equal to 2.5 miles in diameter. Microbursts can cause extensive damage at the surface and in some instances can be life-threatening.

The storm damage knocked out power to 8,000 DREMC customers in the area overnight Wednesday, with some outages lasting well into the day Thursday and Thursday night.