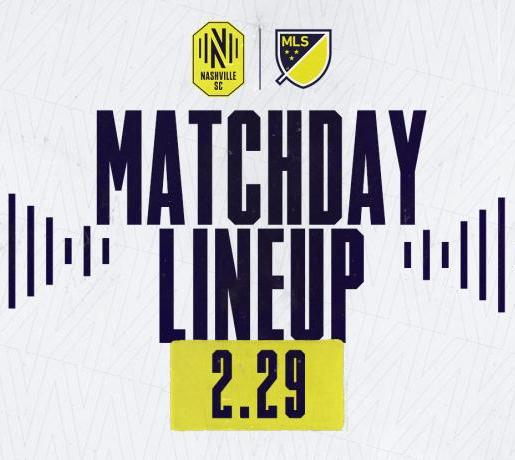 Nashville Soccer Club unveiled Tuesday a series of rituals and activations that will take place during the club’s inaugural match in Major League Soccer against Atlanta United FC on Feb. 29, presented by Renasant Bank. Fans planning to attend will want to get in their seats early to see Judah and the Lion, Charles Esten and Lzzy Hale featured in a night when sports and entertainment come together in Music City.

In a partnership with Judah and the Lion, Nashville SC has teamed up with the Nashville based alternative rock band to create the official club anthem titled “Never Give Up On You.” The band’s 20-minute performance, which will include the anthem, will take place after both teams leave the field following warm-ups.

Following the anticipated entrance of both teams on the pitch, American singer and actor Charles “Chip” Esten will perform the National Anthem. The multitalented artist is no stranger to the Music City and has cemented his place in the industry with his songwriting and countless live performances. Esten, a soccer advocate himself, was a key supporter of the #MLS2Nashville campaign that brought MLS to Music City.

As Nashville SC players set up on the pitch to kick off their inaugural season in MLS, fans will want to pay attention to The Backline section where rock artist Lzzy Hale will be the first to perform the Gibson Guitar Riff. A GRAMMY-winning singer and songwriter with her band Halestorm, Lzzy is renowned as one of the best vocalists in rock and roll throughout her career and will now spearhead a new trend for Nashville SC fans. The Gibson Guitar Riff is a special ritual that will showcase different artists throughout the season as they increase the energy by riffing live on an NSC customized Gibson guitar right before kickoff.

In addition to the exciting performances in store for the home opener, Nashville SC will be unveiling its collaborative community project “One Nashville Under Gold” banner. The project is a collection of images representing Nashvillians from all walks of life, symbolizing the club’s motto; One Nashville Under Gold, as well as MLS’s “Soccer for All” initiative. The banner will be displayed at each home match and will highlight our fans, supporters and community partners across the region. Nashville SC’s honorary flag bearers for this match will be youth from the International Teen Outreach Program of Glencliff High School and the 101st Airborne Division, Screaming Eagles, of Fort Campbell, Kentucky.

A special section of the stadium will be presented in the home opener as Nashville SC unveils Section 615, presented by DEX Imaging. Named after the area code of the Music City, this section is dedicated to people, groups and community organizations who are doing good work in and around Nashville. The first guest of the season will be Oasis Center, a nationally recognized organization designed to help young people in Middle Tennessee move into a happy, healthy, and productive adulthood. In addition, to Section 615, Nashville SC will also be introducing “Our Hero of the Match” presented by Hyundai, a matchday moment to celebrate those members making an impact in our community.

Be a part of history! Tickets to Nashville SC’s inaugural MLS match against Atlanta United FC, presented by Renasant Bank, are available through Season Ticket Memberships starting at just $425 ($25 per game) and through single game and group tickets. Be sure to secure your place in history with the best seats for Feb. 29 and throughout the inaugural season by visiting NashvilleSC.com/Tickets or calling 615-750-8800.