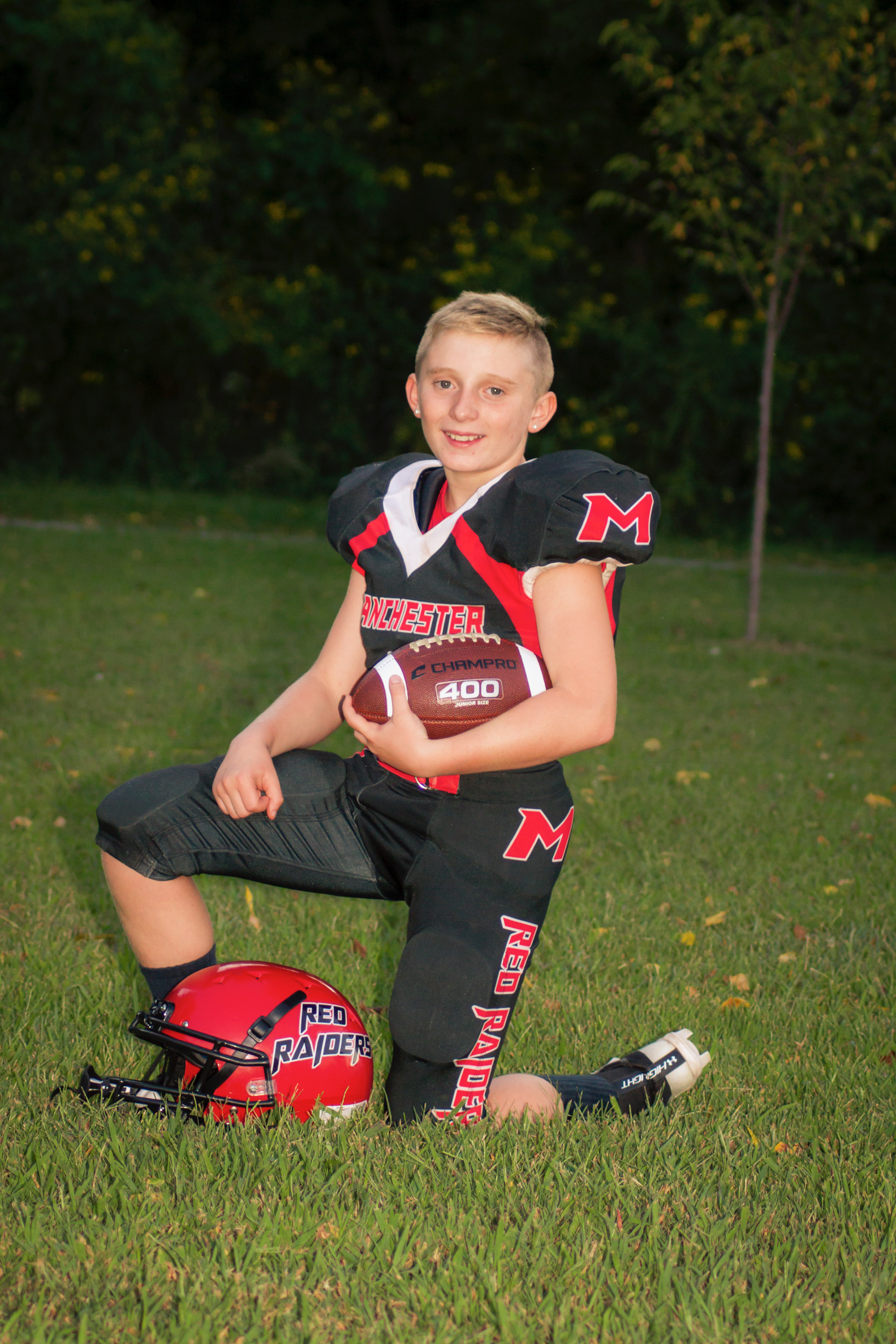 Flag Division (5-6-7 year olds)
report submitted by Danny Strickland:
Jackson County only had 8 players so to ensure equal playing time we played the B group (younger/smaller) the 1st & 3rd quarter, A group (Older/bigger) 2nd fourth quarter. Limiting A group with B group to situational substitutions.
Q1: 40 yard TD by Ethan Proctor
Q2: 2 – 40 yard TD’s by Tripp Trussler. TD and 2 XP’s by Walker Lovelace.
Q3: 35 yard TD by Walker Lovelace
XP by Ethan Proctor
Q4: The Linemen get a shot at Running back (Big Guys) seal the deal with a 20 yard TD run by Tight End Liam Gallagher and XP tacked on by Center Cayden Strickland.
Defense was played well by both groups. Hard effort and hustle limited Jackson County to only 3 scores, but none were made easy.
Final score: Manchester 41 Jackson County 20

Junior Division (8-9 year olds)
Report written by Ashley Delaney Whitman.
The first quarter started off with a bang as the Raiders immediately took charge and put a firm hold on all four downs that Jackson County attempted. AJ Whitman had the first two tackles followed by Jax Nash and then a whole host of raiders to finish them off on the fourth down.
Whitman took the ball on the Raiders first turn on offense and carried it all the way in for their first touchdown. Ty Stevens caught the pass for the two point conversion making the score Raiders 8 Jackson County 0.
Kelden Jolly made the first tackle on Jackson County’s second possession. On 2nd and 4 Eli Baker deflected a pass and almost came away with an interception. Jackson County was able to make a first down but Rance Stafford took them down for a loss of 5 during the last few seconds of the quarter.
In the 2nd quarter, Jolly and Gavin Smith made several big plays on defense. Whitman, Stevens and Huck Damon led the offense but
were unable to add to the score. Raiders 8 Jackson County 0 at the half.
The Raiders returned from the halftime break refreshed and ready to do battle in the 2nd half. Whitman lead off with a “quarterback keeper”. Several more carries by Whitman,Stevens and Damon racked up yardage but no scoring. On 1st and 10 the clock expired. At the end of the 3rd Raiders 8 Jackson County 0.
In the 4th quarter with a chance to strengthen their lead, Whitman carries but to Jackson County’s surprise handed the ball to Damon on the reverse and Damon found the field to be wide open and raced for the Red Raiders second touchdown. The extra point pass attempt was no good but Manchester increased their lead to 14-0.
The Raiders defense did their part to protect the lead with Audie Nicoll, Ethan Hamby, Stevens, Smith and baker tackling their way to the buzzer.
Final Score: Manchester 14 Jackson County 0

Next Saturday October 5th all six of the MYFL Red Raiders teams will be back in action with the TCYFL teams making a road trip to Celina to take on Clay County. Flag division play begins at 10:00 am.

The SMTYFA teams play host to Giles County. Division 1 play is set to begin at 2:00 pm at Carden-Jarrell Field.