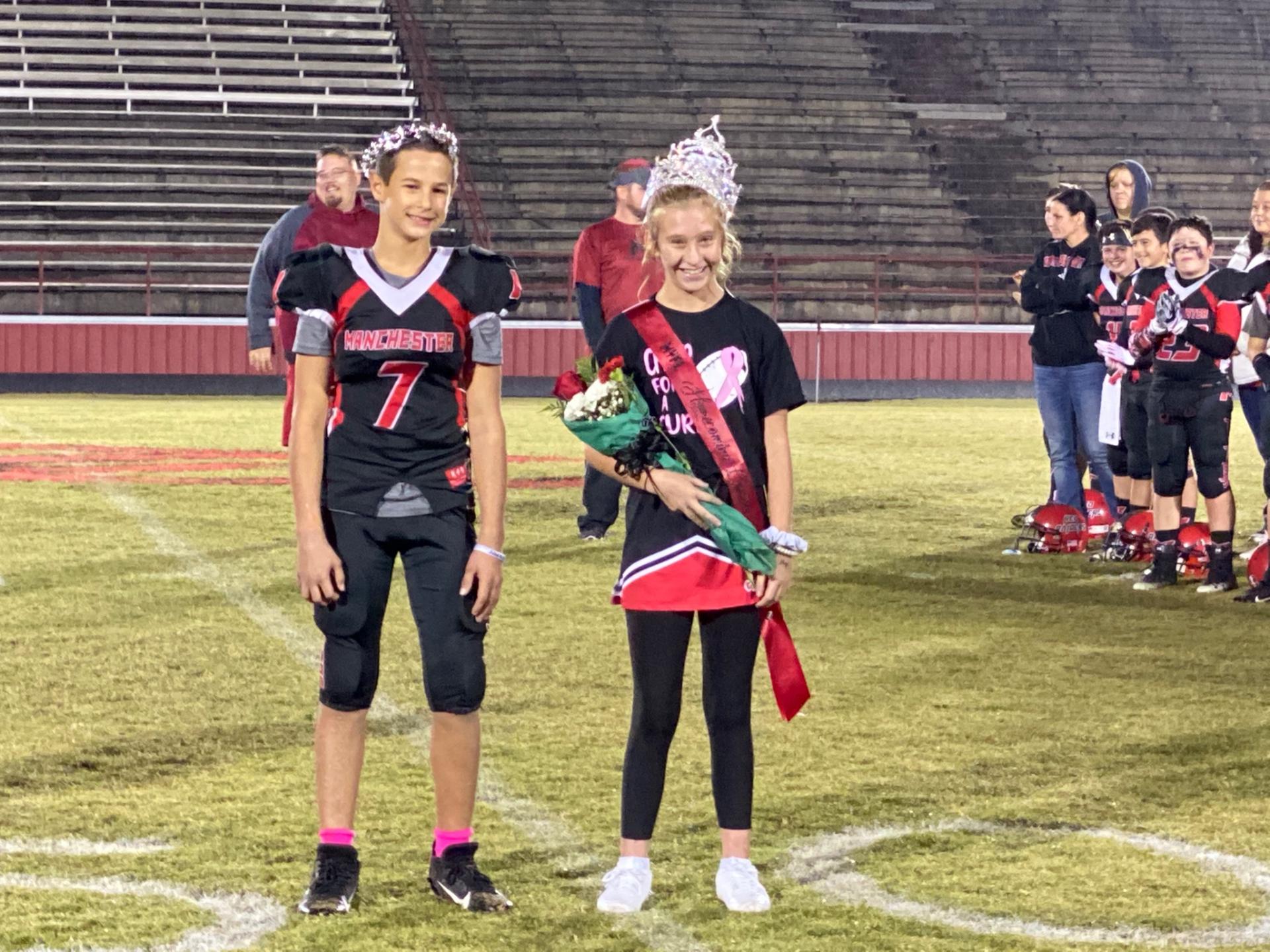 JR Division (8-9 year olds)
The game was hard fought between two teams that matched up really well on offense and defense and was decided by a single score. The Raiders offense couldn’t find a way to get through Watertown’s defense and ended up losing the contest.
Manchester 0 Watertown 6
After the game AJ Whitman was crowned JR Division Homecoming King. The Manchester Red Raiders JR Division finishes the season in 3rd place (4-2 ) and will play in the TCYFL Playoffs next Saturday October 26th against second place Gordonsville (5-1) at 3:30pm in Watertown.

SR Division (10-12 year olds)
Carlos Martinez lead the team in rushing and Isaiah Deadman ran for the Raiders lone touchdown. On a very strong defensive series the defense forced Watertown into the end zone for a safety. The Raiders fall to (1-5 ) and their season comes to an end without a trip to the post season.
Manchester 8 Watertown 14
Isaiah Deadman was crowned Homecoming King for the TCYFL SR Division.

Division 1 (5-6-7 year olds)
The game was a forfeit as the Patriots Division 1 parents and coaches decided prior to making the trip to Manchester that they wanted no part of the Raiders which had accumulated 280 points for the season with 0 points allowed. In SMTYFA a forfeit goes into the record book as a standard score of 35-0.
Manchester 35 Liberty 0.
Hayes Shemwell was crowned as the SMTYFA Division 1 Homecoming King and Jodi Foster was crowned as the Homecoming Queen. The Division 1 first place Red Raiders (8-0) will face 4th place (5-3) Fayetteville City Tigers next Saturday October 26th at 10:30am in Franklin County.

Division 2 (8-9 year olds)
Treyvion Mathis was on the receiving end of two touchdown passes from Levi Scott. Mathis and Scott each had scoring runs. Xavier Foy ran for an extra point. Mathis also kicked a field goal for an extra point. The defense recovered four fumbles for the Raiders. The Patriots called an end to the game in the second quarter.
Manchester 27 Liberty 0
Levi Scott was crowned as SMTYFA Division 2 Homecoming King and Emma Still was Crowned as Homecoming Queen. The 2nd place Raiders (7-1) will face the 3rd place (5-3) Marshall County Elite next Saturday October 26th in Franklin County at 12:00pm in the SMTYFA Playoffs.