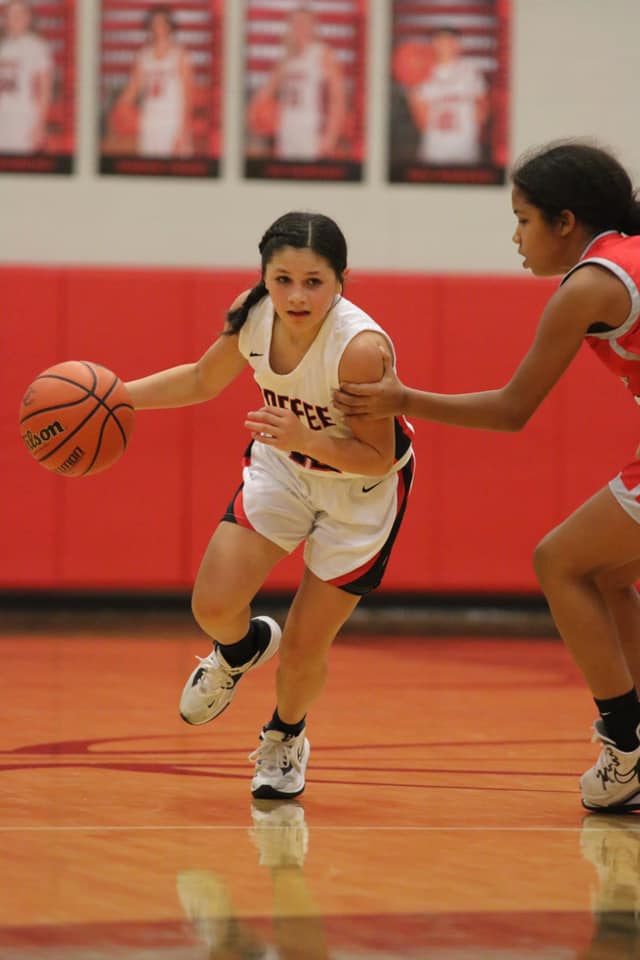 Jenslee Nogodula is fouled by a North defender Thursday night, Dec. 8, 2022. Nogodula went 6-for-6 at the free throw line in overtime to help the Lady Raiders win in overtime. -- Photo by Holly Peterson, Thunder Radio

Things looked grim for the Coffee Middle Lady Raiders Thursday night after blowing a 25-21 lead in the final minutes and going to overtime against the Gatorettes of North Middle.

With the score tied at 29-29 in overtime, CMS proceeded to go 10-for-10 at the free throw line in the final 1:25 to ice the game. Sixth grader Jenslee Nogodula knocked down 6 straight at the stripe, and her older sister Jaydee Nogodula hit the next 4 to give CMS a 39-33 win in Manchester.

Jenslee Nogodula finished with 10 points and Adalyn Clark led the way with 12 before fouling out in overtime.

Meanwhile, the Raider boys handled business with much less drama. Audie Nicoll dropped in 14 points and Marc Rollman 7 to lead the Raider boys to a 34-21 win over the Gators.

The win was the fourth straight for the Raider boys and improves them to 8-2 in CTC play.