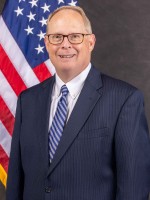 Aaron currently works with the Metro Nashville Police Department as the public affairs director and has for 30 years. He can often be seen on television as the primary spokesperson for the department.

Aaron got his start in media working for WMSR-AM in Manchester at 16-years old where he worked on and off until graduating from MTSU.

Aaron holds a bachelor’s degree in telecommunications with minors in English and Management.