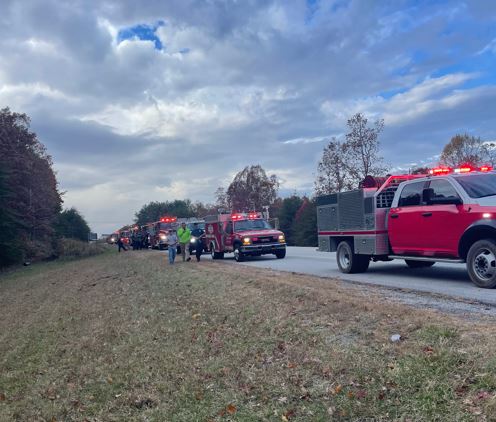 At approximately 3:15 p.m. Tuesday, Oct. 25, “Task Force 6” — which is made up of fire apparatus and crews from Manchester Fire-Rescue, as well as volunteer fire departments from Hillsboro, New Union and North Coffee from Coffee County, along with personnel and apparatus from Lincoln County and Moore County Volunteer Fire Departments and Winchester Fire Department — deployed from Coffee County in support of Wildfires in Warren County.

Crews arrived at 6 p.m. at the staging area on Curtis Town Rd and Hwy 8.  Crews will provide wildfire and structural fire protection for the areas affected by the Wildfires in Warren County.

Warren County Sheriff Jackie Matheny, Jr. issued a release early Tuesday strongly recommending that all residents of Isha and Curtistown evacuate immediately. A temporary shelter has been set up at the Harrison Ferry fire department for anyone who needs temporary shelter.

According to the latest update by Sheriff Matheny, the fire is approximately 35% contained in the gulf at this time.