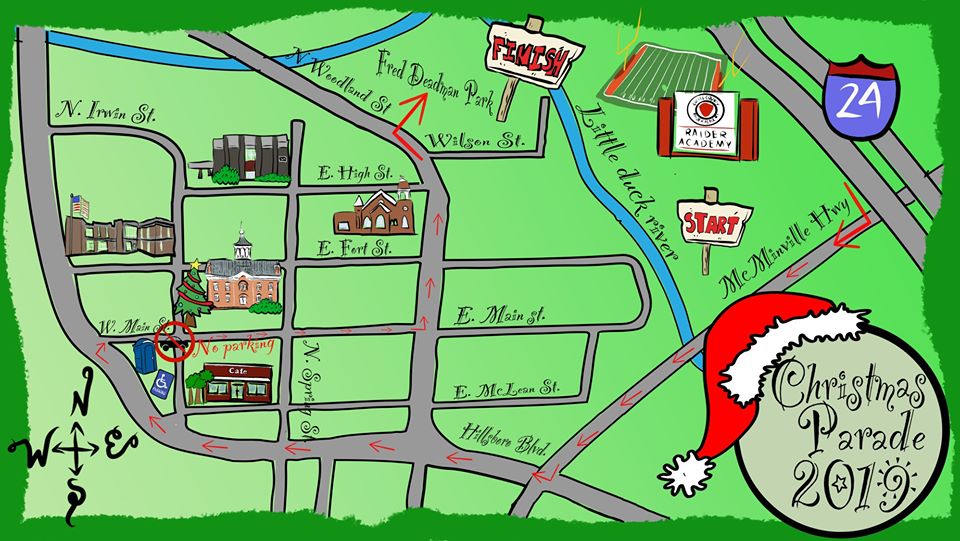 The annual City of Manchester Christmas Parade is set for this Saturday at 6:30 p.m. This year’s theme is “Rockin’ Around the Christmas Tree.”

The parade will start on State Route 55 (McMinnville Highway) past the Raider Academy school, turn north onto U.S. Highway 41 (Murfreesboro Highway) and then turn onto the square on West Main Street, where it will pass in front of the courthouse, exit the square and then disperse. You can see a map of the parade on our website at thunder1320.com. There will be pre-parade entertainment beginning at 5 p.m. on the downtown square. Following the parade will be the annual city Christmas Tree lighting.

Longtime and well-known Manchester resident Dr. Prater Powell will be this year’s grand marshal. Dr. Powell serves as a City School Board Member, a charter member for the Manchester Kiwanis Club, chamber member, Treasurer at Red Hill Church of Christ, the former President of TN School Personnel Association and has been a recreation commission member for nearly 40 years. In the past he has served on the TN Vocation Rehab Board and has been the Director of Manchester City Schools. He devoted 35 years to the Coffee County school system through being a teacher, administrator, and principal.

Also, for the tree lighting, six year old Clay Riddle will be placing the star atop the tree for the lighting. Clay, 6, loves to play with his friends, color, build Legos and all things Hot Wheels. He is a kindergartner at College Street Elementary School and has fun every day after school as a participant in the Manchester Recreation Center’s Children’s After-School Program. Clay is the son to Brad and Katy Riddle and little brother to Karsyn.

In case of inclement weather Saturday, the parade will be moved to the same time on Sunday night. We will have an announcement on the Thunder Radio website by 4 p.m. Saturday if the parade is moved. Rain is in the forecast.