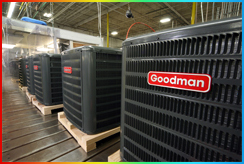 With its most recent round of layoffs, Goodman Manufacturing in Fayetteville has now laid off nearly 1,500 employees.

The company filed a WARN notice with the Tennessee Department of Labor and Workforce on January 9, notifying that 11 more workers would be permanently laid off by March 8 as the company continues to work to shutter operations in Fayetteville. In total, 1,492 people have lost their jobs.

The most recent round of layoffs is the 10th for the company since 2018. According to the Elk Valley Times, fewer than 100 employees remain inside the plant. Daikin, which is parent company to Goodman, announced in 2015 that the plant would close by 2017, but delays have kept it open until recently, when layoffs began to increase. The plant is moving operations to its headquarters in Daikin, Texas.