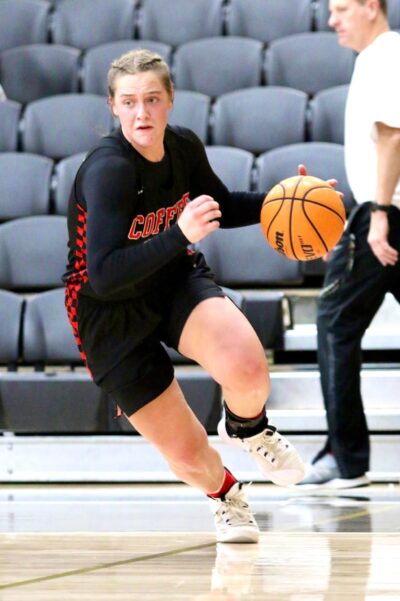 One day after barely having enough players to put a team on the floor due to illness, the Lady Raiders got reinforcements sent down to Ft. Payne, Alabama and beat the host school 62-40 in the  21st Annual Wills Valley Shoot Out.

Chloe Gannon rejoined the team Tuesday and helped boost the presence in the paint, scoring 15 points in the win. Elli Chumley added 14 points. But it was junior guard Alivia Reel playing one of her best games of the season, a 17-point performance that included three 3-pointers, that led the way for CHS.

Kiya Ferrell pitched in 8 points for the Lady Raiders in the win.

Coffee County took a 3 point lead at the half on a buzzer-beating three from Reel. Then the Lady Raiders pulled away – allowing just 8 points in the second half, all of which came in the third quarter. The Lady Raider defense pitched a shutout in the fourth.

Coffee County improves to 9-3 with the win, making six straight wins. The Lady Raiders will wrap-up their three-day trip to Ft. Payne by playing Boaz, Alabama at 10 a.m. Wednesday.