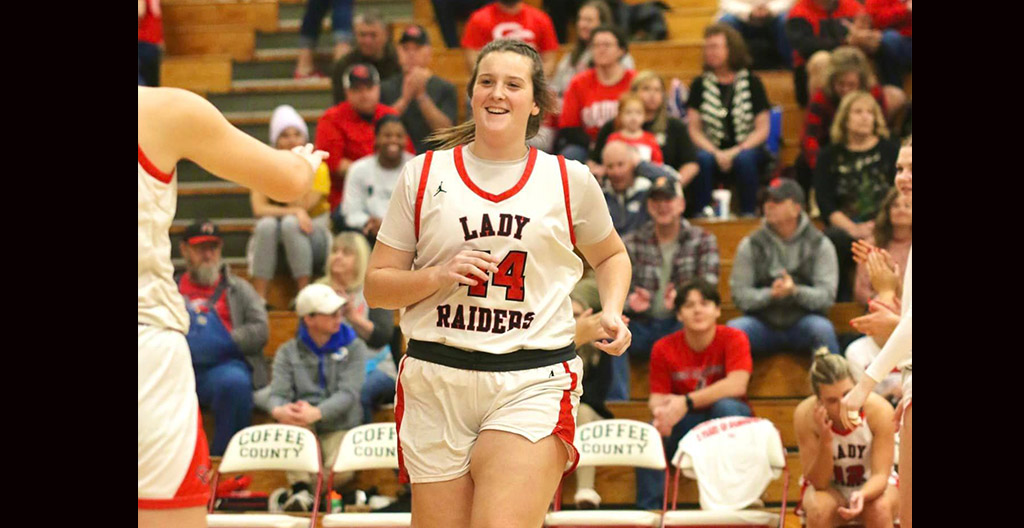 There is a new number one team in The Tennessean Large Class Middle Tennessee rankings – and its home address is 100 Red Raider Dr.

The Coffee County Central Lady Red Raiders climbed to the no. 1 spot of The Tennessean’s “Nashville Area Large Class Rankings” – which basically includes all of Middle Tennessee. The new rankings were released Sunday. The Lady Raiders were previously no. 2 in the Large Class, which includes class 3A and 4A teams.

The Lady Raiders (24-1 overall / 2-0 District 6-4A) are ranked ahead of Livingston Academy, Cookeville and Blackman.

“It is great recognition for our girls and I’m proud for them that people around the state are taking notice of what they have built and are continuing to build here in Coffee County,” said sixth year Lady Raider head coach Joe Pat Cope. “This is a great basketball and sports community and this program continues to get stronger.

“But this is not the goal. This is not the big picture for us,” added Cope. “We have to stay focused and take it one game at a time until we reach the glass house (Murphy Center, state tournament). That is what our girls work for and what they expect.”

The Lady Raiders remained no. 2 in the Class 4A Associated Press Poll last week, which includes the entire state of Tennessee. Bearden in East Tennessee has the top spot. New AP polls are released on Tuesdays.

The Lady Raiders will be in action at home on Tuesday, January 24 against powerful district foe Warren County. The Lady Pioneers played Top 10 ranked Cookeville to a 10 point game on the road Saturday night.

“Warren County is a really good basketball team,” said Cope. “To me, they are a top 10 team in the state. They were ranked there in the preseason and lost to Bradley Central and York and that kind of dropped them out, but Bradley and York are two of the best teams in the state. We are going to get all they got Tuesday night.”