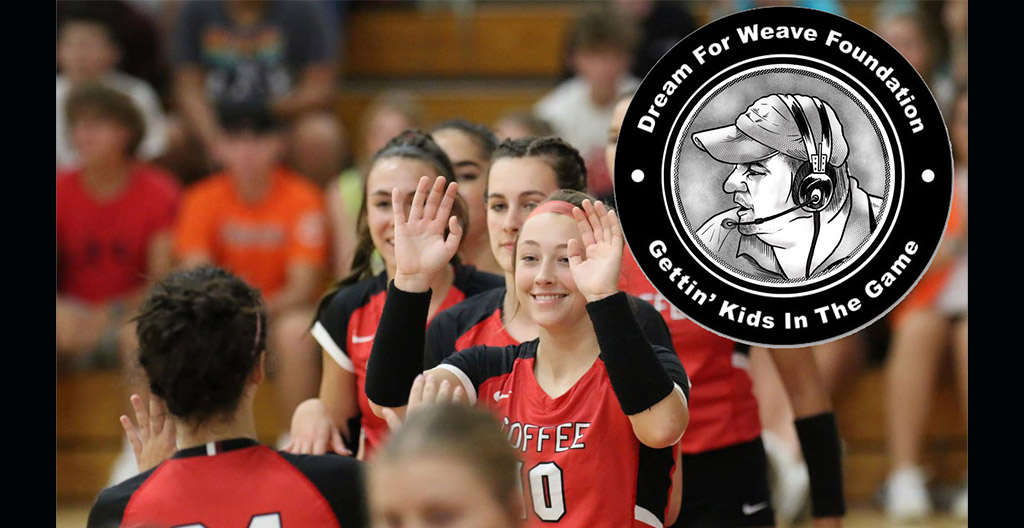 The Lady Raiders went 2-2 on the day Saturday, going 2-1 in pool play and falling in their first tournament game in the afternoon. They are now 12-11 on the year with a busy week ahead. The Lady Raiders will be at Stewarts Creek Monday for a non-district match before welcoming Tullahoma in non-district play Wednesday and hosting their final district match of the season when Warren County comes to town Thursday – which will be alumni night and senior night.

Portions of tournament proceeds will be donated to the Dennis Weaver Dream for Weave Foundation, which has contributed nearly $20,000 to local athletic causes and scholarships over the past two years. Click here to learn more.

Coffee County struggled to wake up for the 9 a.m. match against Eagleville, falling 10-25 and 14-25 in the best of three tournament format.

Kurry Neel pounded out 6 of Coffee County’s 13 team kills and added a dig and an assist to her line score.

Gia Perez served up 3 aces and Neel ripped off 5 kills to lead the team. Senior Camry Moss was busy with 7 of the Lady Raiders’ 22 team digs.

The Lady Jackets made a strong push in the second set, but Coffee County held them off winning 25-16 and 26-24.

Junior Zowee Dillard had 8 kills on the match and a dig. Gia Perez continued her strong service game with 4 aces and Ana Johnson tacked on 3. Ryleigh McInnis and Gracie Campbell each had 5 assists and Madison Pruitt led the way with 6. Savannah Cooper had 3 digs.

Middle Tennessee Christian School beat the Lady Raiders 25-11 and 25-14 and then went on to beat Centennial in the finals.

CHS struggled a bit at the service line at 84 percent and only managed 12 kills, led by 3 apiece from Dillard and Neel. Clark picked up 6 digs and Pruitt 5.