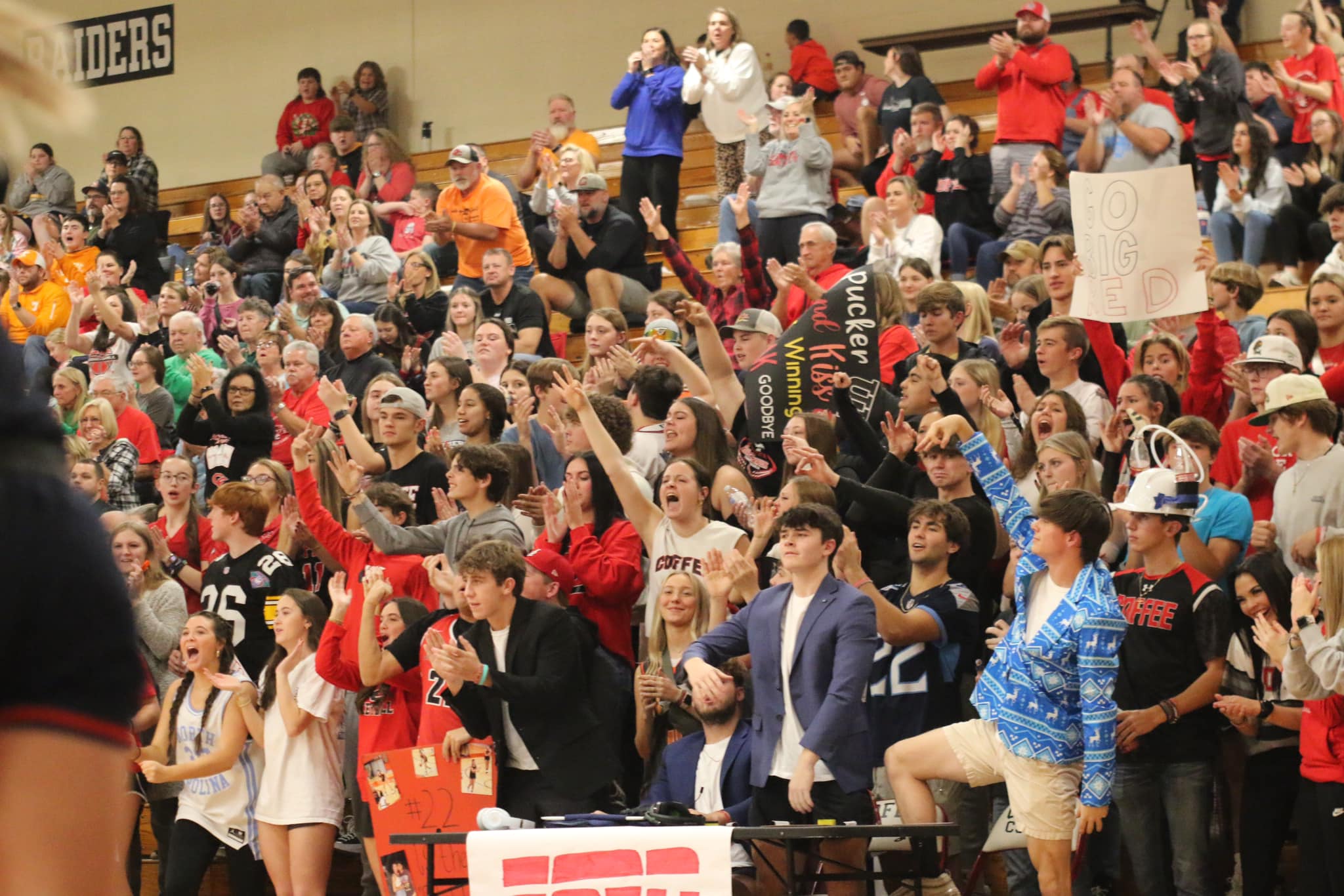 The CHS crowd goes into a frenzy after a big fourth quarter shot by the Lady Raiders Friday, Dec. 9, 2022 against Blackman. -- Photo by Holly Peterson, Thunder Radio.

The top ranked Blackman Lady Blaze are unbeaten no more.

Two great teams that needed all 32 minutes of regulation and then some controversy to decide a winner. With Coffee County leading 48-47, Blackman had the ball in the final seconds. Kaelyn Flowers’ runner was off the mark. Lauren Smith snagged a backside rebound and put the ball back in the basket for what would have been a game winner, but the final horn had sounded just before Smith got off her shot.

It took the officials a postgame conference to decide that the shot was too late and Coffee County had won. Unofficial postgame video independently reviewed by Thunder Radio showed that decision was correct.

“It was close but one thousand percent that shot was after the buzzer,” said Cope. “That was a good finish.”

Tarpley finished was those 3 points, but her defensive effort to limit Blackman’s Emily Monson – a Purdue commit – to 12 points was the line of the night for Coffee County. Monson killed Coffee County when the two teams met on Nov. 28 in Murfreesboro when she dropped 23 points and the Lady Blaze beat CHS 54-49.

“I played against her last year and actually had the same role face guarding her (when I was at Rockvale),” explained Tarpley after the game. “Know what she’s eating for breakfast lunch and dinner. It’s very difficult. She’s a heck of a player. It is fun, though.”

After tying the game to close the third quarter, Lady Raider Alivia Reel buried a 3-pointer from the corner to give CHS the lead a 41-38 and guard Jalie Ruehling hit a 3 to give CHS a 17-2 run.

Coffee County’s Olivia Vinson drove to the basket and left off a perfect pass for Chloe Gannon who put the Lady Raiders up 48-47 with 43 seconds to play. That score held as Vinson earned a steal but Coffee County missed a free throw and turned the ball over to give Blackman it’s final shot.

Vinson finished with 13 points for the Lady Raiders. She started off the night red hot, knocking in a pair of 3 pointers in the first quarter. Blackman ended up with a 14-12 first quarter lead and a 26-24 halftime lead. Vinson left the game in the final seconds with a rolled ankle.