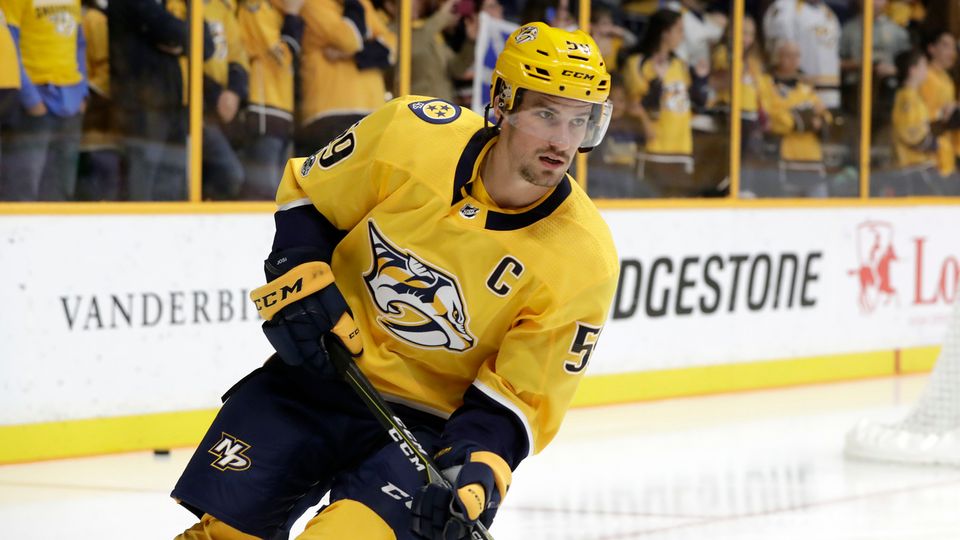 The goals just keep on coming.

Roman Josi tallied twice and the Predators scored three in the third as Nashville defeated the San Jose Sharks by a 5-2 final on Tuesday night at Bridgestone Arena. It’s Nashville’s second win in three tries on the young season and their 10th victory in their last 12 meetings with the Sharks on home ice.

After a 5-3 loss to Detroit on Saturday, the Preds bounced back with another strong offensive effort to give them 13 goals through their first three games of the season. That’s just a taste of their capabilities in the opposition’s end.

And while there were a few more defensive lapses the Preds would like to clean up, they made the most of their own opportunities on the way to another triumph.

“We’re doing the right things offensively,” Predators Head Coach Peter Laviolette said. “I thought we exposed the puck a little bit too much in the second period… so [we need to make sure] we take care of the puck as well. We can’t always create, but it’s certainly nice to see the offense and the goals. The guys are working hard to create.”

“There’s definitely a lot of skill up front,” Josi said of his club’s offensive abilities. “There’s so much skill, and I think it’s a great sign that we’ve taken advantage of our chances too. They were kind of pushing in the third period there and we scored two goals, so it’s been pretty big for us.”

Josi’s first of the night came early in the opening period as the blueliner took a feed from Colton Sissons and sniped a shot past Martin Jones for a 1-0 lead after 20 minutes.

Nashville’s captain struck again midway through the second stanza, this time on the power play. After Filip Forsberg’s shot struck iron, Josi followed it up in the slot and threw the puck home for his club’s second goal on the man advantage this season.

Evander Kane got the Sharks on the board for the first time with a power-play goal of his own late in the second, but the Predators responded with another two before the third period was eight minutes old.

Kyle Turris converted on an odd-man rush for his first of the season at 2:51, and then Matt Duchene picked up his sixth assist of the season with a slick feed to Filip Forsberg, who deposited his third in three games to put the Preds back up by three.

Brent Burns brought the Sharks back to within two late in regulation, but Dante Fabbro iced it with an empty-netter to give the Preds – and Pekka Rinne – their second victory of the season and keep San Jose winless through four games.

“They’re a really good team, and they’re a team that went far last year,” Duchene said of the Sharks. “When Peks needed to be big for us he was, and I thought we were a better defensive team tonight all around. You know, it’s a tough team to play against being as dynamic offensively, but we still were able to score. So I thought we did some really good things and had some big nights from a lot of guys, so that’s what it takes, different guys stepping up each night.”

Duchene’s line with Forsberg and Mikael Granlund has continued to build chemistry in their first and only three contests together, and while they only had one to show for scoresheet, it wasn’t for lack of trying.

“It’s a blast,” Duchene said of skating with his linemates. “We easily could’ve had a couple more tonight, and it’s been fun. They’re both such great players, and I’m very lucky to be on this team for one, and for two, to play with those guys.”

Nashville’s four lines are clicking, and they’re getting contributions from the backend too – but, perhaps most important of all? The Predators avoided an early-season losing streak with Tuesday’s result.

“You can’t really win the season at the start, but you can definitely lose it if you fall back too far,” Forsberg said. “It was a big win for us.”

Defenseman Matt Irwin skated in his first game of the season for the Preds; Dan Hamhuis and Daniel Carr were scratched on the evening.

Ryan Johansen continues to produce at a point per game against the Sharks in his career, tallying 24 points (9g-15a) in 24 games. He is on a six-game point streak against San Jose (1g-7a) and has 11 points (2g-9a) in his last nine meetings with the Sharks.

Tuesday’s attendance of 17,251 is the 156th consecutive sellout at Bridgestone Arena.

Nashville’s four-game homestand concludes on Thursday night (at 7 p.m. CT) as the Washington Capitals come to town. The Preds will then head on the road for the first time this season for a three-game trip, beginning in Los Angeles on Saturday.