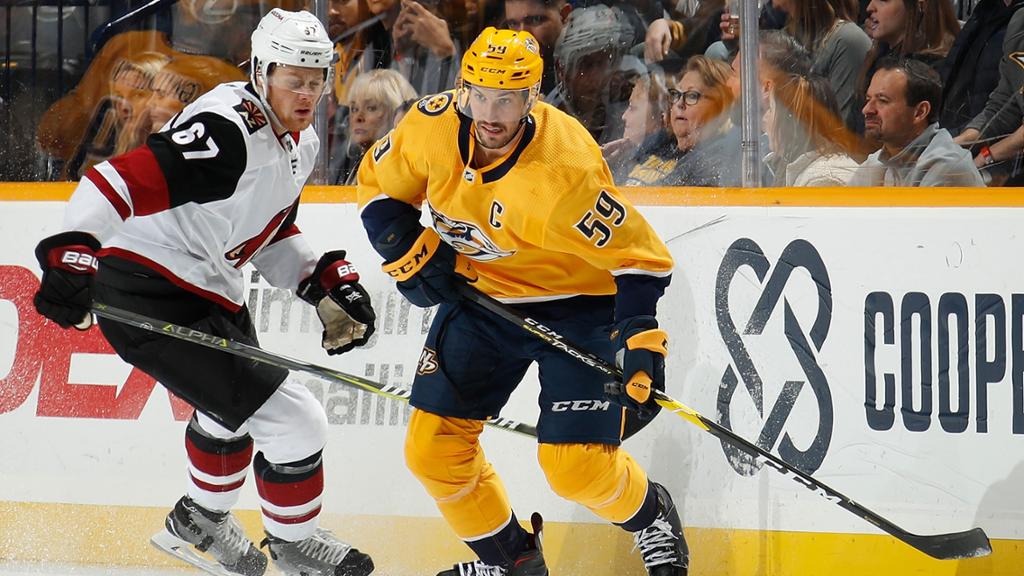 Roman Josi scored for the fifth consecutive game and Pekka Rinne made 26 saves to help the Nashville Predators to a 3-2 victory over the Arizona Coyotes at Bridgestone Arena. The result sends the Preds into the Christmas break as winners of four of their last five games with nine more points to their name over the past week.

A newfound confidence that began on the road carried over into Monday night at home, and after a dominating start, the Predators settled in and found yet another way to boost their confidence and climb in the standings once more.

“It was a huge win for us,” Josi said. “That’s a good team over there, and I thought we played really well in the first. We weren’t happy with the way we played in the second, but Peks played unbelievable. It was a hard-working win for us and we found a way.”

The Predators came out flying, and on their 21st shot of the first period, Filip Forsberg was rewarded with his team-leading 14th tally of the season for a 1-0 advantage after 20 minutes. Josi, who was named the NHL’s Second Star of the Week earlier in the day, assisted on Forsberg’s goal to extend his point streak to five games.

“Right now, he’s in a groove and that’s good for us,” Preds Head Coach Peter Laviolette said of Josi. “He’s had such a strong start to his season. Every game, if not the most noticeable player, he’s one of them. There’s never a game where he doesn’t show up and punch his ticket. He works hard every game. He leads by example.”

In the second, it was Viktor Arvidsson, who scored for the first time since returning to the lineup on Saturday, a month to the day since he was injured back in November. Midway through the frame, Arvidsson ripped a shot that struck the mask of goaltender Antti Raanta and carried over the line for a 2-0 lead.

Lawson Crouse got the visitors on the board when his backhand shot beat Rinne at 18:07 after the Nashville netminder had already made a number of key stops in the contest.

In the third, Josi floated a shot from the point, the kind of attempt that finds its way in when the goals are coming with regularity, and the Captain gave his team their third of the night and what proved to be the game-winner. Arizona answered quickly, but Rinne and his mates shut the door the rest of the way to earn win No. 18 on the season.

“We’re definitely playing better,” Josi said. “We’re getting bounces, but looking back at the road trip at the Islanders game, we were working hard… As long as you put in the work, you’re going to get those bounces and those goals. Lately, we’ve been working a lot harder.”

Saturday night’s overtime win in Boston to finish off the four-game trip was gratifying, but the message in the Nashville room emphasized that the Christmas break hadn’t arrived yet.

One more game loomed, and now that it has also delivered a win, the Preds can settle in for a well-deserved three days of rest before getting back to work.

“The guys are working hard right now, and it was a good road trip,” Laviolette said. “We needed that, and we wanted to play a solid game at home before we went into the break. We have a couple of days off, and when we get back, we just need to continue what we’re doing.”

“We needed that, and it’s nice to relax and take your mind off of hockey after a couple of good wins,” Rinne said. “We’ll re-energize and come back, but it was huge to get those points.”

Pekka Rinne’s 354th career win allows him to pass Rogie Vachon and Evgeni Nabokov for the 20th-most in NHL history. His 354 career wins are the third-most by a European-born goalie, trailing only Dominik Hasek (389) and Henrik Lundqvist (457).

The Predators will now have the next three days off as the Christmas break arrives. They’ll return to the ice on Friday to begin a home-and-home set with the Pittsburgh Penguins, starting in Nashville. After that pair of outings between the 2017 Stanley Cup Finalists, it’ll be off to Dallas for the Preds ahead of the 2020 Bridgestone NHL Winter Classic on New Year’s Day.