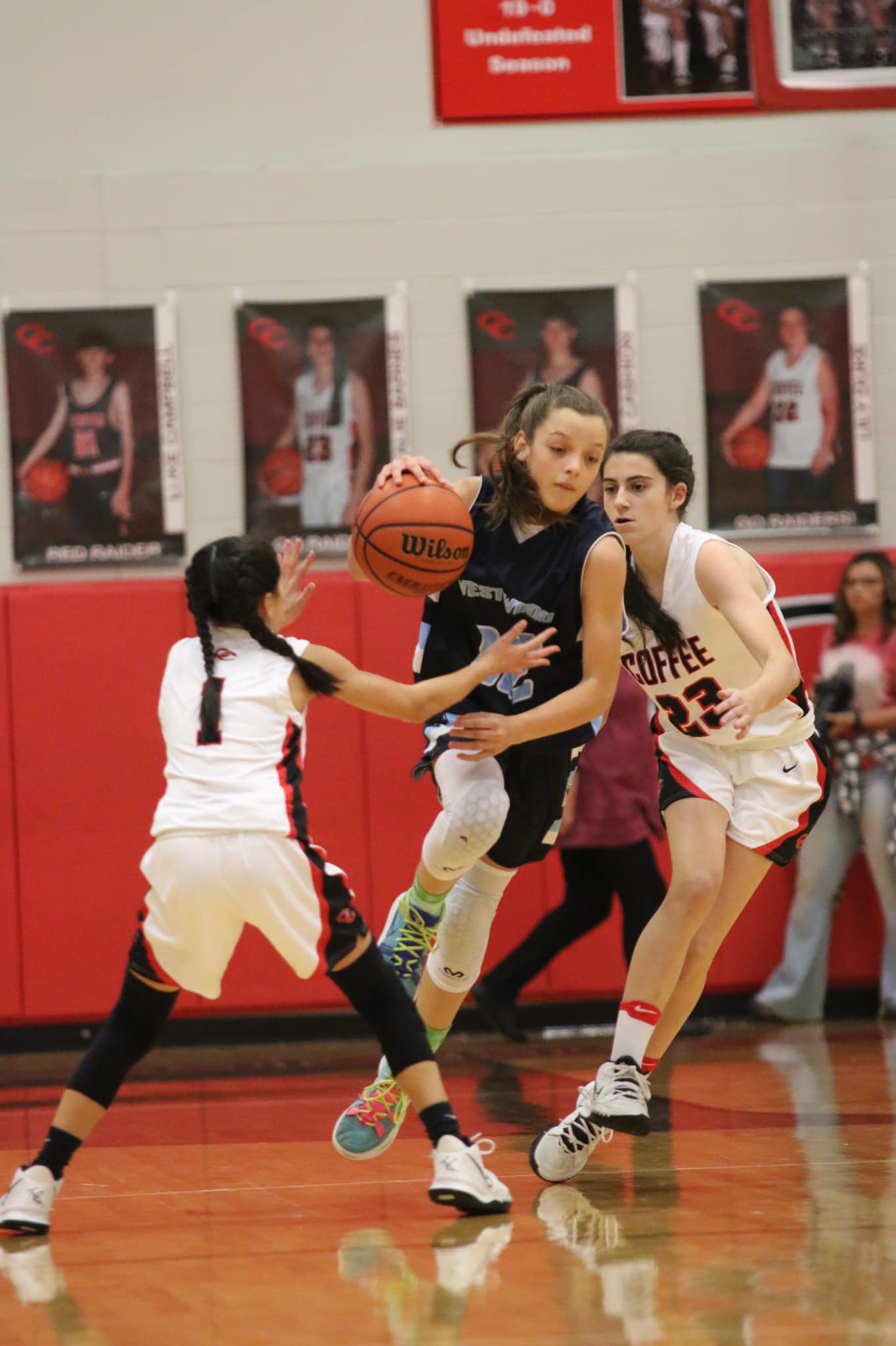 After not meeting on the basketball floor in nearly 14 years, Coffee Middle School and Westwood delivered two basketball games Tuesday that may not be forgotten for another 14 years.

THIS GAME WAS BROADCAST LIVE ON THUNDER RADIO! CLICK HERE TO LISTEN TO THE AUDIO REPLAY !

Pick whatever cliché’ you’d like. Instant classic. Thriller. Heartstopper. Words simply don’t do justice to the product put on the floor by two good basketball teams Tuesday. In the end, with plenty of back and forth, it was Coffee Middle edging past Westwood 50-44 in double overtime.

Down the stretch it was free-throw shooting that won the game for Coffee Middle and a pair of big shots from unsuspecting heroes.

Down 3 with under a minute to play, Lady Raider Natalie Barnes was fouled on a 3-point attempt. She hit 2 shots, setting CMS up for another shot to tie the game. Barnes got a rebound and was fouled the Westwood offensive end after a missed free throw by the Lady Rockets. Barnes went to the line and buried a pair of free throws to tie the game in the final seconds. Barnes was 4-of-5 at the charity stripe in the fourth quarter alone – scoring 8 of her game-high 25 points in the final six minutes of regulation.

Westwood had another shot to win in the first overtime – but Lady Raider Jaydee Nogodula was fouled and went to the line and hit 1-of-2 to tie the game.

By the second overtime, the Lady Raiders didn’t need to come from behind or leave anything to chance.

A pair of big field goals helped CMS- one a 8-foot runner from Kaysen Morgan and another a 12-foot jump shot by sixth grader Hayleigh Harris to put the game out of reach for the Lady Rockets late. Harris didn’t play until overtime – when Ella Arnold fouled out.

Early in the game it was CMS punching first, but Westwood fought back. Westwood fell behind 11-2 early but managed to have the game tied at 21-21 at halftime. The Lady Rockets fought back behind hot shooting – particularly Audri Patton – who knocked down three 3-pointers on the night – including a pair in the fourth quarter that saw the Lady Rockets outscore CMS 13-10 to force the extra periods.

Coffee Middle improves to 12-1 on the season with the non-conference win. Meanwhile, the loss is the first of the season for the Lady Rockets, who fall to 14-1.

Westwood will be back in action Thursday, when they host Thurman Francis at 6 p.m. Meanwhile, CMS returns to conference play Thursday at North Franklin.

Much like the girls – the boys teams needed extra time to decide a winner.

But it was all Coffee Middle in the extra time. Tied at 24 – Red Raider Landon Abellana powered down the lane for a layup late in the overtime period. The Raiders then drew a charge with 6 seconds to play – and an inbound pass the length of the floor connected with David Lewis who hit a layup at the buzzer to give the Raiders the win at home.

The CMS win thwarted what was a strong second half for the Rockets. Westwood got steal by Matthew White and a breakaway layup by Davis McKenzie with 5 seconds in regulation to tie the game and send it to overtime. That capped a 21-13 second half advantage for the Rockets and erased what had been a CMS lead for most every second of the night.

Kaysen Lowery had 9 points to lead the Rockets. Tallan Crosslin paced the Raiders with 9 – all coming on 3-point shots.

THIS GAME WAS BROADCAST LIVE ON THUNDER RADIO! CLICK HERE TO LISTEN TO THE AUDIO REPLAY!