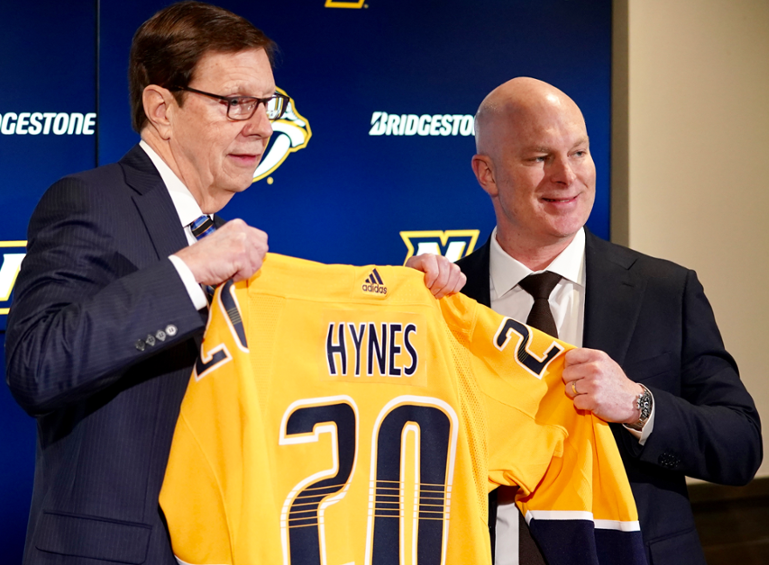 No one can say when – or even if – the National Hockey League will resume play in 2020, but John Hynes will have his team ready to go, just in case.

Entering his third month as head coach of the Nashville Predators, with the calendar flipped to April, Hynes spoke to the media on Monday for the first time since his second month on the job. Plenty has changed since that March night at the Bell Centre in Montreal, a night when Hynes fielded questions on the stellar play of Juuse Saros and his team’s overall effort during a three-game winning streak.

Less than 48 hours later, instead of facing the Maple Leafs in Toronto, Hynes and the Preds were on their way back to Tennessee, unsure of what was next.

Over the past three-plus weeks, Hynes has still been fulfilling plenty of the job requirements, just not in the traditional sense.

Instead of meeting face-to-face with the rest of his staff, Hynes holds conference calls and video meetings throughout the week from the comfort of his new home in Nashville. Hynes has a phone call with Preds General Manager David Poile just about every day to discuss a little bit of everything during these uncertain times.

The bench boss has also been in touch with his players – not every day, as he wants them to have some space – but still with some amount of regularity, just to keep the line of communication intact, no matter what happens next.

“The thing that’s most important is the League will make the right decision as far as what’s the most equitable, fair and what makes the most sense for the League,” Hynes said Monday afternoon. “I’m not sure what that is. I just know that for the Nashville Predators, if [hockey] does come back, we’re going to play some high-stakes hockey… The most important thing for us as coaches, and obviously our players, too, is just understanding that whatever the League decides is going to be the right thing and the right way to go about it, we just need to make sure that we’re prepared to get back… and play some high-stakes hockey.”

For Hynes, that preparation comes throughout the day, often in the morning, as his three daughters go to school virtually. Like most, spending extra time with family has been a bright spot to arise in the course of the pandemic, and time outside, usually followed by a family game night or movie has been a welcome addition at this time of the year.

Hynes has also found time to read – he’s currently immersed in “The Splendid and the Vile,” a biography focused on Winston Churchill – but he’s leaving the TikTok videos to his daughters for the time being.

There’s a different kind of virtual interaction Hynes is focused on – one with those throughout the hockey operations department of the organization, including in Milwaukee with the Admirals, Nashville’s primary developmental affiliate in the American Hockey League.

Those discussions, Hynes says, have been enlightening as each and every player in both Nashville and Milwaukee have been evaluated and reviewed, not only by what they do on the ice, but as people, too. It’s given Hynes an opportunity to not only take a deeper dive on those who could be helping his club in the years to come, but also those who are relied upon right now.

Hynes believes his team was trending in the right direction at the time of the pause, which undoubtedly makes it frustrating from a hockey standpoint to have to put everything on hold. There are more important things in life at this juncture, of course, but Hynes can’t help but think of what could happen once the games return, whenever that might be.

“A couple of things that helped us get in the right direction, get on a winning record and put ourselves in position to be in the playoffs was our mental toughness, our team camaraderie and our team togetherness,” Hynes said. “It was better, and it grew over the course of time together, whether it was handling adverse situations, whether it was a real strong belief… in what we’re doing and that we do have a good team and a good group of players, but we’ve got to be more focused and more consistent.

“I really liked the direction that the team was going. You can see that the guys were in together, they were playing for each other… There was a really strong cohesion starting to build [with a] belief, and that’s unfortunate we weren’t able to finish it off yet. We need to make sure we stay connected and stay prepared, so when we do get back, we’re ready to play the right game the right way and give ourselves the best chance to win.”

Whenever that day comes, Hynes is confident in the work the Predators are doing now to prepare for whatever’s next. For now, there’s nothing more to do than to be ready.

That day will come eventually, and when it does, Hynes knows his club is going to do so much more than just play a hockey game – it will be a return to a sense of normalcy. And even if it’s just a drop in the imagination for now, it’s something.

“We miss having fans around, and our players miss having the opportunity to perform in front of them,” Hynes said. “I want to let them know that we really appreciate everything that they do for us… I know as coaches, players and management, as an organization, we’re trying to make sure that we’re utilizing this time to [get ready]. When we do have the opportunity to play and perform in front of you, we’re certainly going to be ready to make you proud. Please stay healthy, stay safe and we’ll get out of this together. When we do, we’ll have some fun times.”