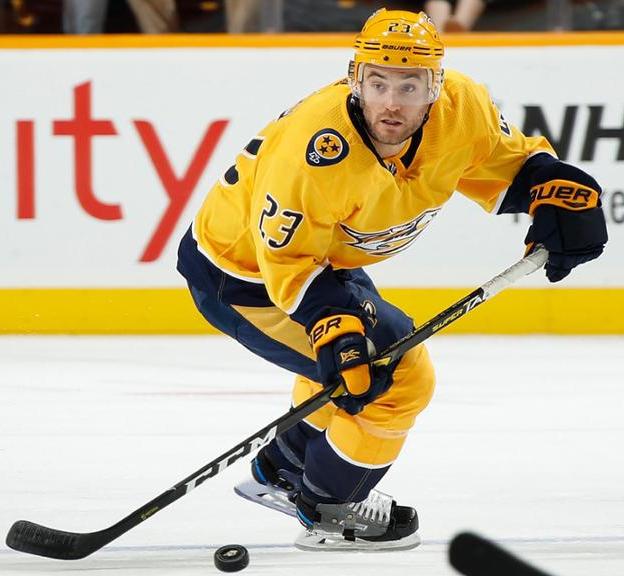 It took until round eight, but the Predators found a way.

Rocco Grimaldi tallied the winner in the shootout, as Nashville came back to defeat the Columbus Blue Jackets by a 4-3 final on Saturday night at Bridgestone Arena. The result gives the Preds three out of a possible four points across their back-to-back set this weekend, and although they weren’t able to get back into a playoff spot tonight, they got the win – and that’s what matters most.

“One of the things we had talked about was being better at home on Saturday nights and making sure that we were mentally prepared to play,” Preds Head Coach John Hynes said. “It’s a step in the right direction, and it was a bit of a grind game for us. They were rested, we were in the back-to-back with travel, so you can anticipate that you may not play a great 60 minutes, but these are the games you have to have mental toughness and a complete team effort. I thought we did that for the most part.”

“There are things we could have done better, but the group fought until the end,” Preds forward Ryan Johansen said. “We found a way to get two points which was the job that needed to be done. Great to get the result. I don’t think we are going to be looking back at this game in a month. All we are going to look at is the points we got. We’ll take that and move forward.”

The night began ideally for the home team, as Ryan Johansen took 33 seconds to give the Preds a 1-0 lead. Midway through the frame, Mikael Granlund finished off a 2-on-1 with Filip Forsberg and beat Blue Jackets goaltender Elvis Merzlikins for a 2-0 advantage after 20 minutes.

In the second stanza, Columbus scored three straight on Juuse Saros to take their first lead of the night, but before the middle period was out, Forsberg found Colton Sissons in front, and No. 10 directed the puck over the line for his first goal since Dec. 12 to tie the game at three.

“It felt good [to score],” Sissons said. “I’ve been working really hard since I’ve been back, and it feels good to be rewarded.

“We loved our first period, but I’m sure they got a talking to by their coach in the intermission there and they came out flying… They made it difficult on us, so kudos to them for that. They pushed us all the way to a shootout, and I’m certainly happy that we grinded and stuck in there to show a bit of mental toughness to grind one out.”

After a scoreless third period and overtime, Saros stopped six Columbus attempts in the shootout, and Forsberg, Ryan Ellis – and finally Grimaldi – all tickled the twine to give the Preds a win on Saturday night in their home building.

“Honestly, I’ve never gone backhand in my life on a breakaway or shootout,” Grimaldi quipped. “Maybe when I was 10, but I mean every goal I’ve scored on a breakaway the last few years, always forehand, so I thought I might try something new. Glad it worked.”

The Predators would have preferred to collect four points in the standings over the last two days, but they still got one in Chicago on Friday, and a shootout victory to top the Jackets was the perfect way to begin a five-game homestand.

“We’ve been working in segments here, and we’ve been doing a good job, but [we] need to string a couple more together,” Sissons said. “Three out of four on a tough back-to-back isn’t bad.”

Saturday was the final game for the Predators prior to Monday’s NHL Trade Deadline (at 2 p.m. CT), and it remains to be seen what General Manager David Poile elects to do with his club. However, one thing is certain: This Nashville team, despite all that’s happened to this point in the season, still has plenty of belief when it comes to their postseason aspirations.

“It’s just crazy to think that we’re still right there, and we’ve got games in hand too, which is great,” Grimaldi said. “Sometimes that’s what happens. So if we’re not in a playoff spot in Game 81 and we are in Game 82, that’s fine. Who cares? It doesn’t matter. At the end of the day, you want to be in a playoff spot the entire season, for sure, but as long as you’re in after 82, it really doesn’t matter if you’re in right now.”

Prior to Saturday’s game, the Predators made a trade to acquire defenseman Ben Harpur from Toronto in exchange for forward Miikka Salomaki.

Nick Bonino missed his second-straight game due to illness. Dan Hamhuis and Matt Irwin were scratched for the Preds.