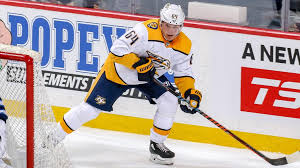 Mikael Granlund and the Predators waited until the last possible second – literally – to tie the game, and then Granlund tallied again in overtime to give Nashville a 4-3 victory over the Calgary Flames on Thursday night.

The result gives the Preds their third consecutive victory and 72 points overall in the standings, enough to keep their Wild Card spot in the Western Conference.

On a night that seemed as though it might not go Nashville’s way, Granlund proved a game is never truly over until the final horn sounds. And when only 0.1 seconds exists between the time the puck enters the net and the game clock reads zero, well, that creates a moment that even the most seasoned hockey veteran has likely never experienced before.

“That was quite the ending,” Granlund said. “Everything that happened there. The biggest thing is that we got those two points and we found a way somehow. It was a big two points. We tied it up, then they get the third goal right at the end and then we tie it up again. That’s hockey sometimes. Entertaining for sure.”

“It was pretty crazy,” Preds Captain Roman Josi said. “It was fun. The crowd was into it, and we were obviously into it. It’s a big game too, they’re right ahead of us. It was a really fun game.”

It took until the 19:28 mark of the opening period, but the Predators took the lead before the first intermission when Colin Blackwell found Colton Sissons in front, and No. 10 buried his ninth of the season for a 1-0 advantage. With an assist on the play, Blackwell extended his point streak to four games.

The Predators kept pushing in the third, and with less than six minutes to play in regulation, Preds Captain Roman Josi’s shot squeaked through David Rittich to tie the game at 2-2. However, with 43 seconds remaining, Andrew Mangiapane scored what appeared to be a back-breaking goal against the Predators.

With Saros pulled and the clock ticking down, Filip Forsberg came up with the puck after a scramble in front of the Calgary net, and from behind the goal line, he fed Granlund who banked a shot in off of Rittich’s pad with virtually no time left on the clock.

That sent the Bridgestone Arena crowd into a frenzy, but Granlund wasn’t done yet.

Just over a minute into the extra session, and after one move around the defender didn’t work, Granlund found the puck on his stick once more, and No. 64 snapped it into the twine to complete one of the more dramatic comebacks in franchise history.

“No, not that tight,” Preds Head Coach John Hynes said when asked if he had ever experienced a buzzer beater of that nature. “That’s another step in that mental focus and resiliency. Just understanding that in a game there’s bad things that are going to happen, but you have to stay focused. I think that’s a big learning lesson for us.”

With the goal, Granlund became just the fourth player in NHL history to score the game-tying goal with less than 10 seconds to play in regulation before winning it in overtime – regular season and playoffs combined.

But what’s most important on this night is another two points in the column for the Predators.

“It doesn’t matter how we win at the end of the day, but this one was pretty special,” Josi said. “It doesn’t happen too often in your career that you score that late. It was a huge game and a huge two points, but it was definitely a special one.”

They don’t ask how, just how many – and when it comes to points, the Predators now have 72 of them with 19 games to play.

The stretch run is here. Buckle up.

“We’ve been trending in the right direction, for sure,” Sissons said. “This game will definitely give us some confidence and give us a little bit of energy. We’ll take that and run.”

Prior to Thursday’s game, the Preds reassigned goaltender Connor Ingram to Milwaukee as Pekka Rinne returned to the lineup from illness. Rinne backed up Saros on Thursday.

Yannick Weber, Korbinian Holzer and Austin Watson were scratched for the Preds against the Flames.