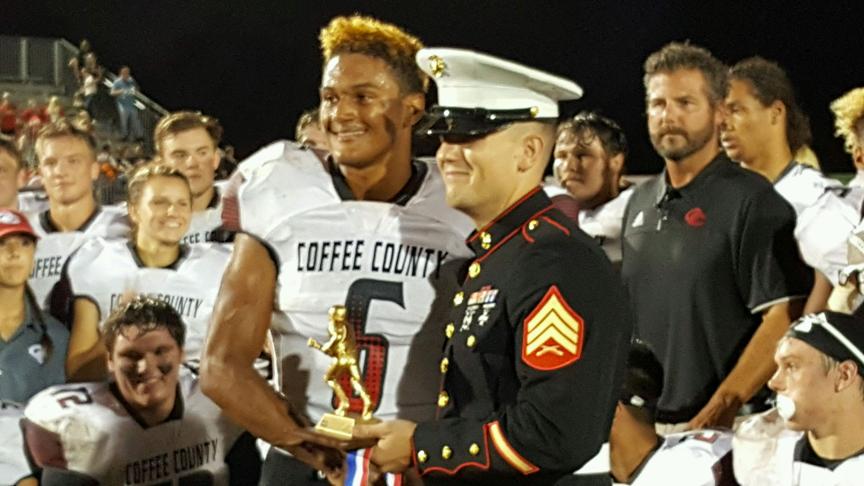 The CHS football program plans to recognize Taylor for his contributions to CHS football, the community and his post high school successes. He will be recognized at halftime.

Taylor played quarterback for the Red Raiders from 2014-2017 and left his mark in the record books. At CHS he rushed for over 6,000 yards, threw for over 1,700 and had 479 receiving yards. Including kick returns, Taylor accounted for 8,225 yards and 75 touchdowns during his tenure as a Red Raider.

He went on to a successful career at the University of Tennessee, where he was a four-year starter, represented the Vols as vice chair of the SEC Leadership Council and represented Tennessee at SEC Media Days. This past April he was selected in the second round (49th overall) in the NFL draft by the New Orleans Saints.

FARRAR ALSO TO BE HONORED FRIDAY

The CHS football team will honor Scot Farrar – a linemen who played in Manchester in the 70s before a successful career as an offensive tackle at the University of Tennessee.

Scot Farrar was an all-state lineman for the Red Raiders in 1973. Farrar went onto a five-year stint for the UT Vols as an offensive tackle, playing for Bill Battle and eventually Johnny Majors.

In the spring of 1976 Farrar began to make inroads as an offensive lineman as a junior and saw plenty of action that season. Projected as a starter for the 1977 season, Scot suffered an injury during the spring that year which cause him to fall back to a reserve role although he did play in 11 games as a senior.

Farrar passed away unexpectedly in 2018 at the age of 63. A tribute to Farrar will be played between the first and second quarters of Friday night’s game against Shelbyville.

The Raiders host Shelbyville Friday night, Sept. 2 – kickoff set for 7 p.m. Paper tickets are available at the CHS main office during regular school hours or digital tickets can be purchased anytime at gofan.co. No paper tickets will be at the gate.

This is the region opener for the Red Raiders and the Eagles. Shelbyville enters play 0-2, while the Raiders are 1-1.