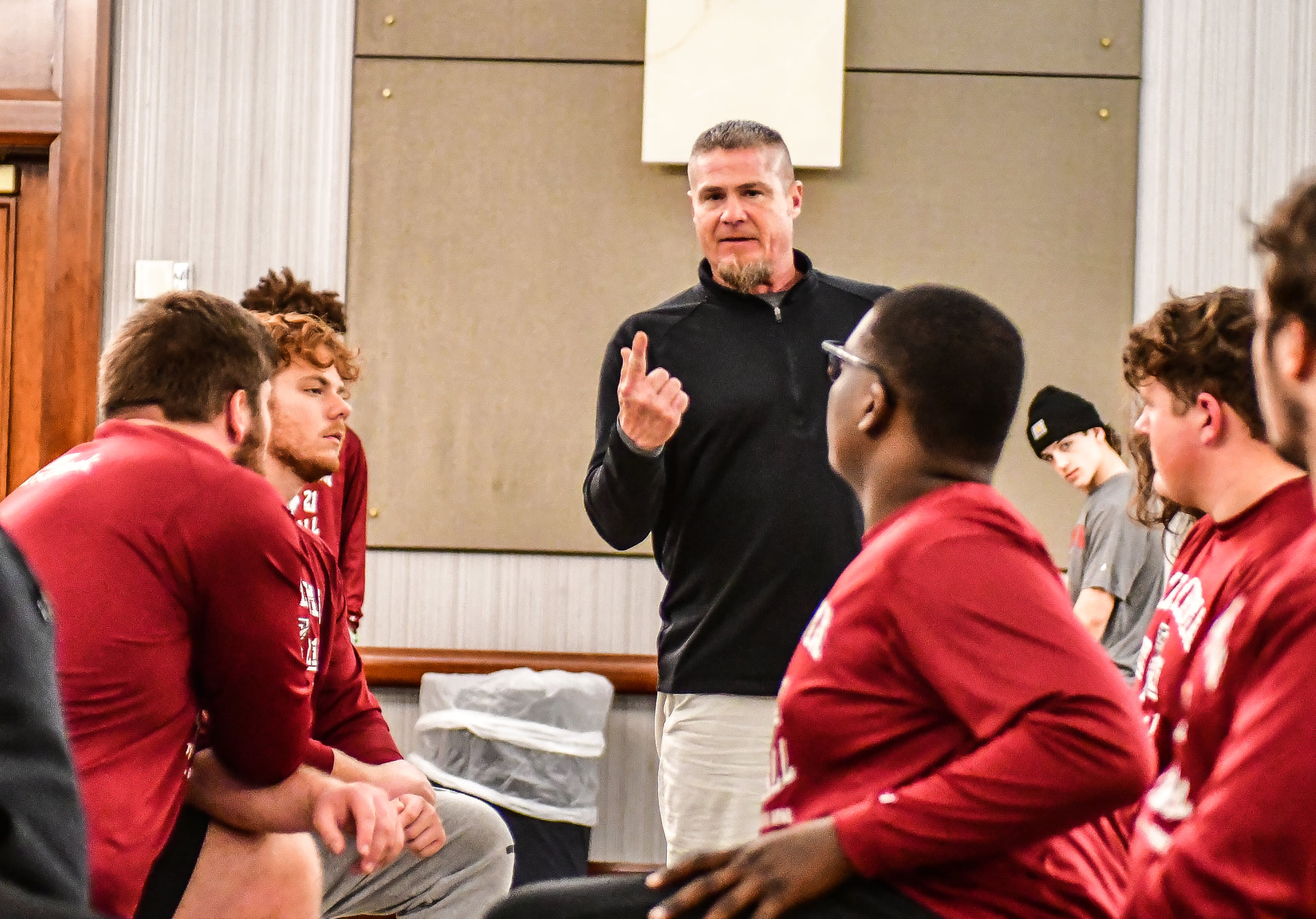 Tullahoma didn’t have to look very far to find its next football coach as former assistant Coy Sisk has
been promoted and is the new Head Coach of the Wildcats.


“My family and I are flattered that I was even a candidate for this position,” Sisk said. “I’m super excited to keep serving Tullahoma City Schools and to still be a Wildcat.”


Sisk had been an assistant coach for the Wildcats since 2014, and takes over for longtime
Tullahoma coach John Olive, who retired in early December following the program’s first-ever state title. Sisk has also served as defensive coordinator at Coffee County – first joining the CHS staff as an assistant in 2003.

During his 29 seasons in Tullahoma, Olive’s teams combined for a 203-126 record.


When Olive began his tenure in Tullahoma in 1993, Sisk was a junior at Lincoln County High School. Looking back, Sisk said he remembers facing Olive’s first Wildcat football team during a preseason scrimmage.

“We used to compete in a jamboree and played Tullahoma every year. I got to play against Coach Olive’s first- ever Tullahoma team,” Sisk said. “Those are stories that I’ve been able to share with Coach Olive over the years. Coach Olive created a high standard here at Tullahoma, and now my job is to uphold that as head
coach. The foundation is built for success because of him.”

Once Olive retired from his position, several assistant coaches began discussing who the next coach should be amongst themselves. During the conversations, Sisk said he would apply for the opportunity so long as he had the backing of his fellow assistant coaches.


Once gaining their approval, Sisk submitted his application.


“If you go into a position where you think that you’re the guy, you’re getting ready to be humbled really quickly,” Sisk said. “I work with a great group of guys who communicate well together. These coaches are
really fun to be around, and they are also very knowledgeable.”

In the search for a new coach, THS Principal Jason Quick said that he wanted somebody who could produce
wins on the football field, but more importantly, he wanted a coach who would be a great role model for his
players. According to Quick, Sisk embodies all of those qualities.

“I am very excited to have Coy Sisk as the new head coach of the THS football program,” Quick said. “As the
criterion for the characteristics desired in the next head coach was being created, three areas were very
important to me. The first was that the candidate needed to possess character, integrity and leadership.
Secondly, our coach needs to have the ability to create and nurture relationships with all shareholders of the program including players, coaches, parents and the community. Lastly, I wanted to find a candidate who has demonstrated success on the football field. Coach Sisk checked all three of these boxes and many more. I also received tremendous feedback from the Wildcat Nation stating their belief that Coy is the right man for the job. I am looking forward to having him lead our program as we enter the next 100 years of Wildcat football.”


“This past year, I reflected back to 1993 and shared with our players about what they might expect during that state title week,” Sisk said. “It was really neat to see our players go through the same experience after such an exciting year. They are a wild and fun bunch of players to be around, and they definitely stepped up and took care of business when they needed to. Not every group of players is like that, but these guys were.”

After graduating from Lincoln County High School, Sisk attended Maryville College and Middle Tennessee
State University, where he received degrees in physical and secondary education. He was previously an
assistant coach at Lincoln, Marshall and Coffee counties before joining the staff at Tullahoma in 2014.


“This is such an exciting day as we introduce Coy Sisk as the new Tullahoma football coach,” said TCS
Director of Schools, Dr. Catherine Stephens. “In my two years at Tullahoma, it’s been a joy to see the success that the Wildcats have had on the football field. More importantly, it has been fun to watch the interactions between players and coaches; it is easy to see the players’ love, respect, and admiration for Coach Sisk. This hiring feels like a natural and right fit for our football program, and I’m so thrilled for the future of Tullahoma High School football.”

While the Wildcats may not kick off the 2022 campaign until August, Sisk said he has thought a lot about this upcoming season. Now that he’s the head coach, he mentioned some qualities that he wants to see from his players.

“On the field, I want our guys to be humble but play the game hard; we want them to be gritty and tough,” Sisk said. “I always want them to play the game with class and remember that it’s never ok to quit. That goes for off the field as well. They should work hard and give their best wherever they are, on or off the field. Each time they’re out in the community or on the field, they represent Tullahoma, the school, and their family. There are so many life lessons that football teaches, and I hope that these guys can carry those lessons with them as they move on to the next level.”