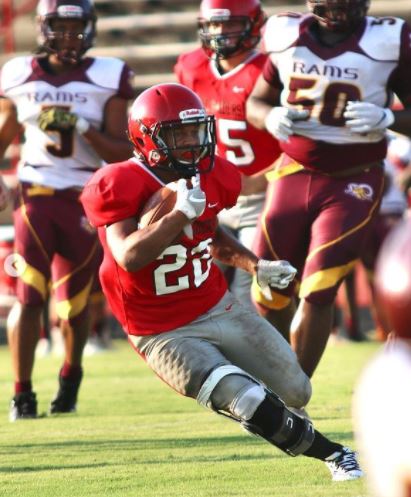 The Raiders wrapped up the preseason schedule with a home scrimmage against Tyner Tuesday night at Carden-Jarrell Field. CHS ended the night ahead 35-14 on the scoreboard. The game was tied 14-14 at the half with both teams playing mostly second and third teamers for the final two quarters.

The Raiders led early on a tough, short touchdown run from junior tailback Konor Heaton – who also bulled his way into the end zone midway through the second quarter to finish with a pair of touchdowns in the first half.

Coffee County had a shot at a 35-yard field goal to end the first half with the lead after a forced fumble and recovery by Derrick Scott in the backfield. But Ian Welden’s attempt was blocked. Welden was 2-for-2 on extra points.

After the blocked field goal, Scott pressured the Tyner quarterback into throwing an interception to Raider linebacker Brendan Sheppard to close the half.

Coffee Count’s depth flexed on Tyner in the second half. Tristin Galy rumbled in from 5 yards out and Kendall James got in on the action with a touchdown run in the fourth quarter. Freshman Jayden Carter got in on the action to close the scoring, rumbling 25-yard and running over multiple Rams on his way into the end zone.

Sophomore Elijah McCoy was 3-for-3 in extra points in the second half.

The Raiders now turn their attention to the season opener – August 20th at Franklin County. The Raiders’ first home game will be Aug. 27 when Tullahoma comes to town.

You can hear the Red Raiders all season long on Thunder Radio – your home for Coffee County football for over 60 years. Catch the Red Raiders every Friday, beginning with the Friday Night Thunder Pregame show at 6 p.m. for unmatched content, interviews and analysis of Coffee County football. Hear Thunder Radio at 107.9 FM, 1320 AM, 106.7 FM, on your phone with the Manchester Go app and at thunder1320.com.