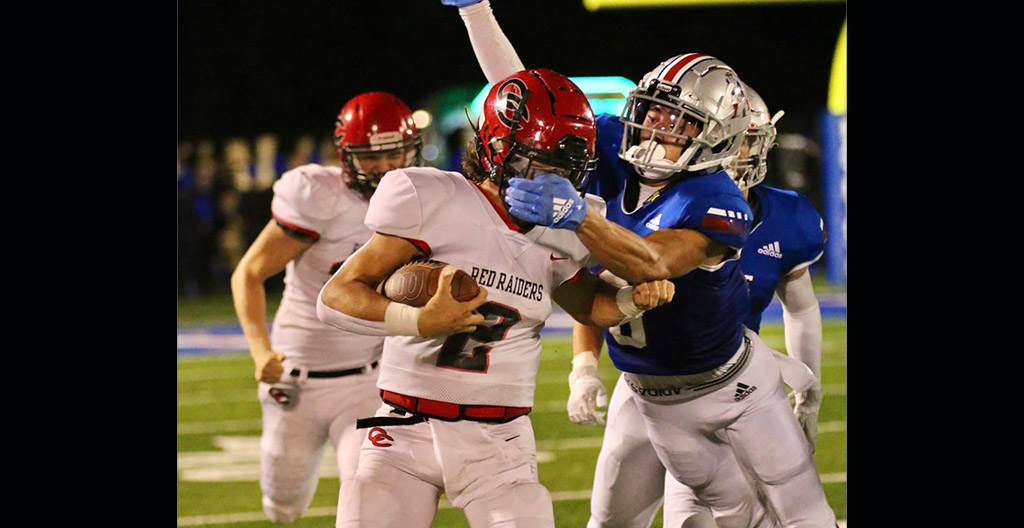 Coffee County Central outscored the top ranked Page Patriots 14-7 in the second half.

But it wasn’t enough to overcome a poor start.

The Raiders fell behind 21-0 on the road Friday night and tried to scrap back, but ultimately lost 28-14 at Page High School (no. 1 Class 5A).

After falling behind 21-0, the Raiders showed signs of life early in the second half. After forcing a page Turnover on downs inside the 10 yard line, the Raiders went 98 yards in just 3 minutes, capped with a 10-yard touchdown run by Cole Pippenger to cut into the deficit at 21-7.

THIS GAME WAS BROADCAST LIVE ON THUNDER RADIO.

CLICK HERE TO LISTEN TO THE FIRST HALF REPLAY.

CLICK HERE TO LISTEN TO THE SECOND HALF REPLAY.

The Raiders forced back-to-back Page punts with a chance to get the game within one possession, but were never able to get on the board again until the final seconds. Konor Heaton capped a long fourth quarter drive to give the Raiders their final score with under 30 seconds to play in the game.

The first half struggles the Raiders faced were all against the Page passing attack. The Patriots aired the ball out all night. Quarterback Colin Hurd was 27-of-44 for 368 yards and 4 scores. Two Patriot receivers had over 100 yards receiving, including Boyce Smith who hauled in 13 balls for 197 yards and Max Collins who caught 9 passes – 3 for touchdowns.

The Coffee County offense was inconsistent, especially early on before finally setting in some. Pippenger was 10-of-25 for 131 yards. He rushed for 90 yards and a score.

The loss drops the Raiders to 2-2 on the season (1-0 Region 3-6A). Coffee County will return home next week to host Lebanon on Sept. 16. Kick off is set for 7 p.m. and you can hear the game on Thunder Radio, beginning with the Friday Night Thunder pregame show at 6 p.m.