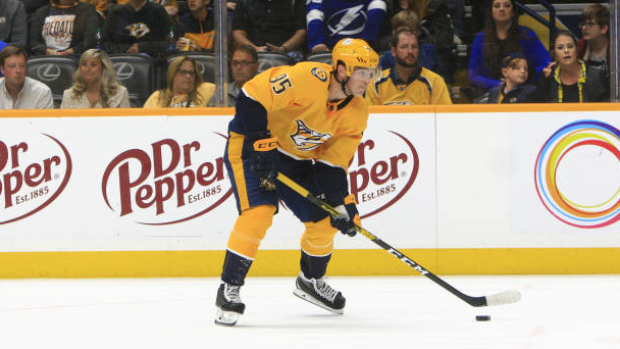 A few questions later, the youngest member of the Duchene family joined his father on screen, as the Predators centerman continued to field questions on what life has been like in recent weeks.

The blue-eyed young man wasn’t the first family member to steal the show from a hockey-playing father from those on the NHL circuit, and he likely won’t be the last to do so in the days, weeks and months to come. Appearances like Beau’s have become commonplace in chats like these, discussions that used to take place in locker rooms around the League.

But the cameo was just another sign of the times, a hockey player like Duchene, at home in Nashville, on a video call in his pantry instead of potentially preparing for a postseason contest.

“It’s been interesting,” Duchene said of life in quarantine. “I haven’t gone as crazy as I thought I was going to at the start. It’s been really nice to spend time with my little guy… I’ve been chasing him around and watching him grow… [and then I’ve been] trying to stay in shape as best I can, and the mental break is nice, too.”

Duchene says this is the most time he’s had on his hands in a long while – perhaps since he was Beau’s age – as he looks to pass the time with the NHL season on pause amidst the COVID-19 pandemic. Well-known to be a country music fan, Duchene has continued playing the guitar, including a shiny, new, acoustic model he purchased recently.

There are at-home workouts curated by Predators Strength and Conditioning Coach David Good, a mix of exercises for Duchene to keep in shape as much as possible during a time when team facilities – including sheets of ice – are unavailable.

Like everyone else, Duchene is hopeful for a return to NHL hockey as soon as possible, but he also realizes the only thing he can do is stay home as we all do our part to flatten the curve.

“This is so complicated, and if we do see sports resume, whether it’s this season or next season, for all the sports, who knows what it’s going to look like,” Duchene said. “It’s just the impact of this on the world and us as the human race. There’s a lot of bigger things going on than sports. So it kind of puts it on the backburner in your mind, because you just realize how sports is just a pastime and something that brings people enjoyment. It’s not maybe an essential part of, ‘OK, let’s just get the world back online here,’ so who knows what it’s going to look like.”

Ideas have run rampant as to what the NHL in particular could look like if hockey were to return at some point over the summer in an attempt to award the Stanley Cup in 2020. Duchene says forgoing the remainder of the regular season schedule and jumping right into the playoffs would be fine with him, although he also cautions a miniature training camp of sorts would be a necessity.

“You need at least three weeks from the time facilities open to the time you’re playing a game,” Duchene said. “There’s so much that goes into it, because you can’t mimic [playing hockey at home]. I don’t even have a hockey stick here, like I can’t even just go out and stickhandle in my driveway… It’s so complicated that way, but I think just to put a good product on the ice and the guys aren’t getting hurt, I think you need that amount of time.”

Duchene also recognizes the potential scenarios for playing games are virtually endless as well, depending on how the League decides to format the rest of the season – if there’s even a season to format. However, there’s just no way to be able to say with any degree of certainty who the Preds could play next, and when that would be.

What Duchene does know is how serious the situation is, and how quickly someone can be taken from the world in an instant. Duchene grew up in Ontario listening to the music of country star Joe Diffie. Just a couple of weeks back, Diffie lost his life to the virus, a moment that hit home for Duchene.

“That was kind of the day for me that it… affected my world directly in some way, like my personal life, if that makes sense,” Duchene said. “I grew up listening to Joe Diffie, and my dad and I, we’ll always be big fans. To lose somebody like that just so suddenly and without warning and no prior health issues, that’s kind of that was kind of the moment I was like, ‘Geez this is really scary.’

“It’s so much bigger than sports, and yes, it sucks for fans not to be able to watch us play and watch all the other sports, and it sucks for us to not be able to play but you’ve got to… have the right perspective and realize how lucky we all are to be healthy.”

That mindset has allowed Duchene the opportunity to appreciate the quality moments he’s gotten at home with his son – moments he simply wouldn’t be receiving otherwise. So just before Duchene finished up his chat to go about the rest of his day – another day without hockey – he offered this thought as we all look for instances of hope among these uncertain times.

“The perspective I’ve had through the whole thing is I’m never going to get to spend this time I have with Beau right now, ever,” Duchene said. “It’s never going to happen again, because as he gets older, he’s going to have his own stuff, I’m going to be busier than I am right now… and I think that’s a cool thing. Maybe the silver lining in it is we get an opportunity to kind of take a deep breath and stop our busy lives and be close to the people that we love and care about.”