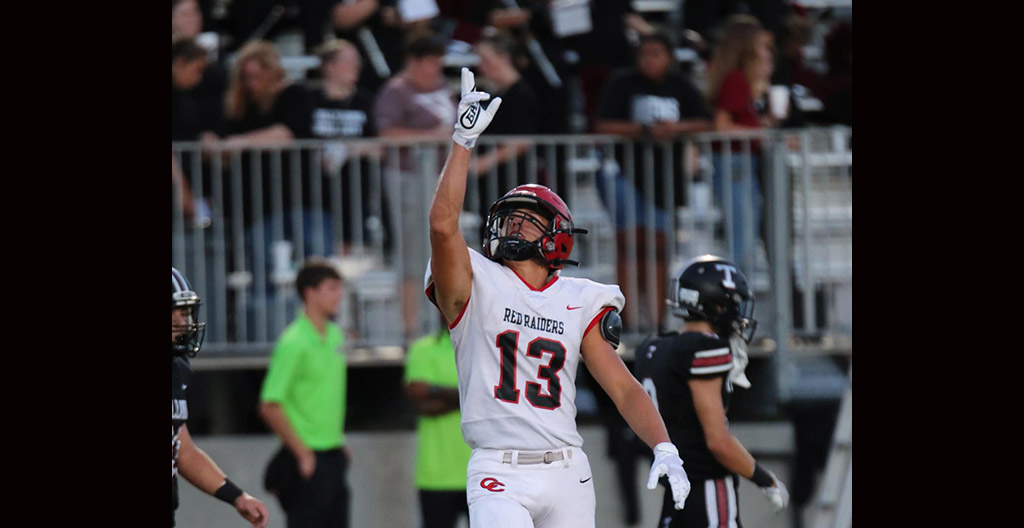 Although the Wildcats made it interesting late in the first half and early in the second half, Coffee County Central beat Tullahoma in pull-away fashion Friday night at Wilkins Stadium, 35-14 to claim the coveted Coffee Pot Trophy.

The win for Coffee County snapped a five-year skid to the Wildcats. And it ended a 16-game winning streak for Tullahoma dating back to the beginning of 2021.

“This is a great feeling,” said CHS senior wide receiver Travis Martin after the game. “We have worked hard for this. I’m glad we are getting to see that hard work pay off now.”

Martin stole the show with his highlight reel catches. He finished with 156 yards receiving on six catches, including a remarkable one-handed grab on the sidelines and a jump ball that he turned into a 78 yard reception down to the 2-yard line. The last catch set up a 2-yard run by Konor Heaton to put the game out of reach.

Pulling the trigger for all of it was sophomore quarterback Cole Pippenger, who was 14-of-25 through the air for 259 yards and 2 touchdowns – one to Jaiden Foster on a pass that slipped right through Jahlin Osbourne’s hands.

“I’m in a pretty good mood now,” said Pippenger. “I was nervous a little big last week. But I didn’t have any nerves today.”

Pippenger also rushed for 74 yards on 9 totes. His other touchdown pass was all the work of Heaton out of the backfield. After catching the ball in the flats, Heaton zigged and zagged 39 yards for a score. Heaton caught two passes for 43 yards and rushed for 81 yards and 3 scores – from 15, 8 and 2 yards out, respectively.

“Offensive line and the receivers blocking down field, it was a group effort,” said Heaton.

Coffee County took a 14-0 lead and didn’t allow a Tullahoma first down until 4 minutes to play in the first half. But the Wildcats drove the field and score on a 1-yard Jaxon Sheffield plunge as time expired on the half to take momentum into the locker room. Then the Wildcats tied the game on the first possession of the second half when quarterback Nathan Delaughter connected with Jalen Hill for a 49 yard touchdown on 3rd and 9.

But that was it for Tullahoma. The Raiders didn’t allow the Wildcats to sniff another score.

Coffee County outgained 414-219. The Wildcats only had 93 yards in the first half, and 78 of those came on their final drive that led to a touchdown.

Pippenger and Martin were named Sir Pizza co-Players of the Game on the Thunder Radio broadcast. Pippenger was named game MVP by members of the media and coaches in attendance on behalf of the Great American Rivalry Series.

Coffee County improves to 1-1 on the season with the win. It is their first Coffee Pot victory since 2016. This year marked the 97th in the historic rivalry. The Raiders open Region play next Friday, Sept. 2, when Shelbyville comes to town. Paper tickets are available at the CHS main office through the week or digital tickets can be bought at gofan.co. No paper tickets at the gate.

The Wildcats fall to 1-1 with the loss. Tullahoma had not lost since the playoffs in 2020.

THIS GAME WAS BROADCAST LIVE ON THUNDER RADIO. CLICK HERE FOR THE SECOND HALF REPLAY.