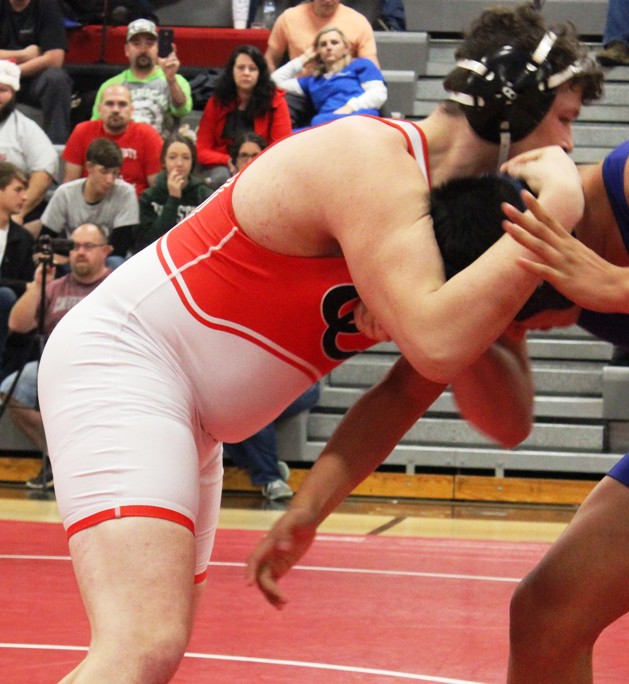 The Coffee County CHS wrestling teams traveled to Tullahoma on Saturday to compete in the Garner-Dyer Individual Invitational.  The Red Raiders got a 9th place team finish and 3 medalists.  The Lady Raiders finished in 6th place with 2 medalists having only 4 wrestlers competing.

The Red Raiders got 3rd place finishes from Gavin Prater(at 145 pounds) and Christopher Speagle(220).  Jeremiah Wardell captured a 4th place finish for the Red Raiders who finished ahead of region rivals Tullahoma, Shelbyville, LaVergne and Rockvale.  Prater finished the day with 2 wins via byes, a pair of pinfall wins and a decision win.  Speagle grabbed 2 byes and 2 pinfall wins.  Wardell got a bye, 3 pinfall wins and a major decision win.  In the heavyweight class, Cardin Stump got a bye and 2 pins before falling short of the medal round.

The Lady Raiders high medalist was Mary Anne Walker who finished in 2nd place in the 132 division.  Walker grabbed a pair of pinfall wins and a bye on the day.  Mary Wolfrum got 2 pins and a decision win to grab 4th place in the 125 division.  Alanna Coker grabbed a pinfall and decision win to go along with a bye at 112 as she just missed the medal round.  Lyra Leftwich got a pain of pinfall wins in a crowded 140 division bracket as she was eliminated just short of the medal round.

The Raider grapplers will be back in action at home twice this week as they host home matches at the Raiders Academy on Tuesday and Thursday.  On Tuesday, Coffee County will host region foes Shelbyville and Lawrence County in an important tri-match.  On Thursday night, the Raiders will co-host a match with the Coffee County Youth Wrestlers as they welcome Cascade and the Cascade Youth program.  Matches both nights begin at 6 PM.